After the close of business today Apple, Inc. (NASDAQ:AAPL) will report its fourth quarter earnings. I thought it would be interesting to go back and look at the last three years to see how you would have done if you just used this simple trade strategy.

So here's what is needed to make a trade in Apple before today's earnings report is released. The position is taken the day Apple, Inc. (NASDAQ:AAPL) releases its earnings report, i.e. today.

(1) Both the weekly and monthly Trade Triangles are in sync.

(2) Take a position on the close in the direction the Trade Triangles are indicating.

(3) Exit the position the following day on the close.

These are simple, straightforward instructions. As an old mentor of mine used to say, "They don't pay you any more for making it complicated."

So how has this worked in the past? END_OF_DOCUMENT_TOKEN_TO_BE_REPLACED

Yesterday, the 900-pound gorilla, Apple Inc. (NASDAQ:AAPL) reported earnings and by all accounts they were outstanding, far outpacing all of the pre-earnings estimates. But the reality is, the stock price barely moved and is up just 1.5% in today's early trading. I still believe that Apple is not out of the woods yet and it is yet to have any new blockbuster products or innovations. 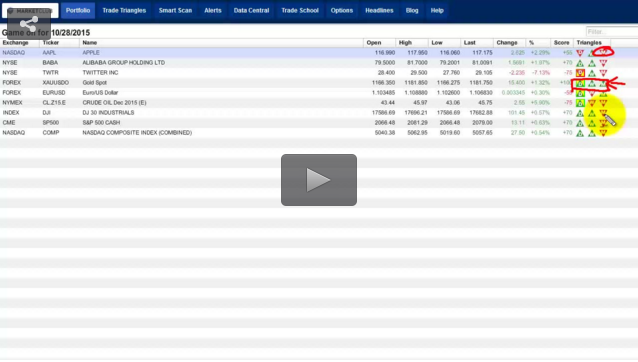 Today after the close Apple Inc. (NASDAQ:AAPL) reports its quarterly numbers. It reports revenues, profits and will offer some guidance and perhaps share with everybody how many iPhones it has sold, but not watches.

So, how many Apple watches have been sold? How many people have you seen wearing an Apple watch? I have to admit, I have only seen two or three folks with Apple watches on their wrists, but that's all. 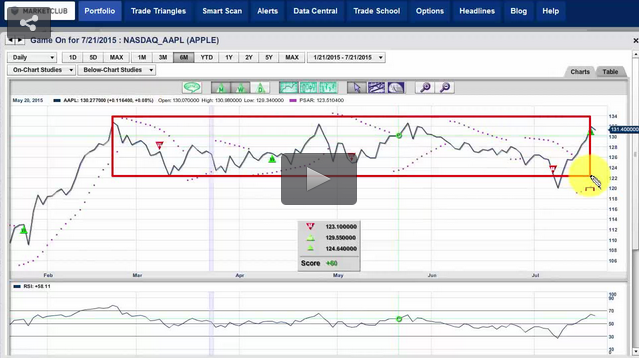 As a huge Apple fan for the past three decades, I did not feel the need to rush out and purchase an Apple watch. One of the reasons was because I already had a smart watch from Pebble which suits me fine and does practically everything that the Apple watch does. The Apple watches are beautifully made, but you have to charge them every night, which to me is a non starter.

Apple is not going to share Apple watch sales with us today, that item is going to be buried along with other items they have sold in the quarter.

The general consensus among analysts is that earnings per share will increase to $1.79 from $1.28 a year earlier. They're also looking for growth of around 32% on sales to $49.3 billion.

The technical picture is somewhat mixed for Apple in the sense that Apple has a monthly RED Trade Triangle that is indicating the trend for Apple is in more of a wait and see trading range right now. That could all change today should Apple move over the $134.80 level. I would also view a close today over $134 as a big clue to earnings and it would represent a new high close for Apple.

In addition to Apple, I will also be looking at the major indices, gold, crude oil and the euro.

Have a question or comment for us? Feel free to leave any questions or comments below this post.

Today after the market closes, Apple Inc. (NASDAQ:AAPL) reports its Q1 earnings. Expectations are running high as iPhone sales out of China are expected to be big, very big. As you may remember, I wrote a special post on Apple indicating that I thought the stock could move up to the $145 to $155 area. 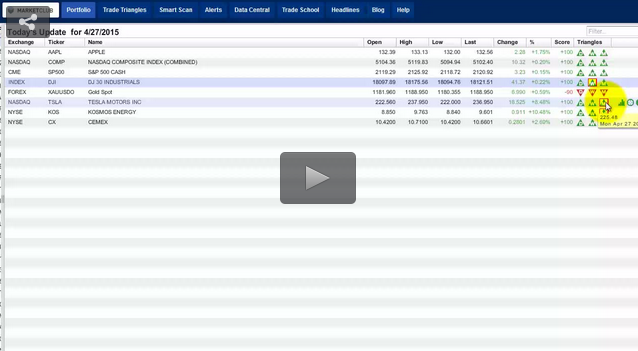 I also highlighted the time window in which I thought the stock could do that. I am looking for an upward swing in Apple lasting between 23 and 28 days. The current upswing began six days ago which would indicate that we have somewhere between 17 and 22 days left on the upside if this same pattern continues. That would make Apple hitting its highs somewhere between May 3rd and May 8th.

One of the things I will be looking for in Apple today is a close over the previous all-time high close of $132.95 on the Februay 23, 2015. Should the market close over that level today, then there's a very good chance we could see Apple reach the target zone.

Last word on Apple, this stock could also act as the catalyst and driver that propels the indices and other tech stocks higher.

In today's video, I will also be looking at the usual suspects along with some new ones for you to enjoy.

As always, I welcome your feedback and questions on any market. Have an outstanding trading day and let's see what Apple has up its sleeve after the close of the market.

After the close of business today, Apple Inc. (NASDAQ:AAPL) and Yahoo! Inc. (NASDAQ:YHOO) will release their earnings. I thought it would be interesting to share with you how the Trade Triangles are positioned going into the release of their earnings.

As always, expectations are extremely high for Apple. But it's a different picture for Yahoo who is sitting on a $40 billion cash hoard from their stake in Alibaba. 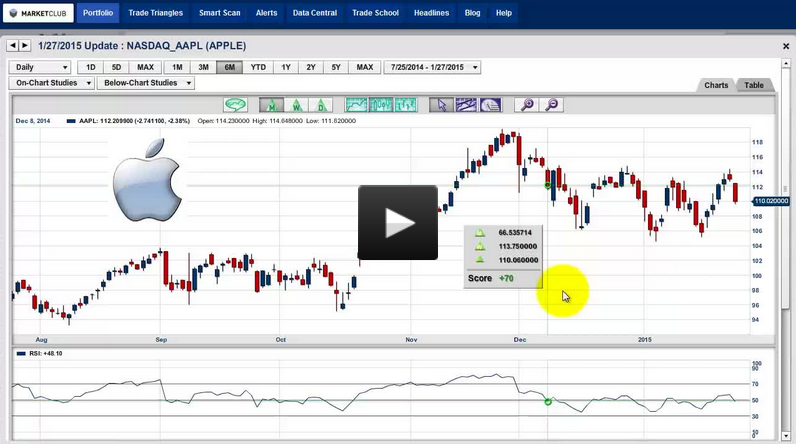 The question will be, how many iPhones did Apple sell and how did the iMac perform in comparison to the previous quarter? Did people opt for the iPhone 6+ or did they simply go with the regular iPhone 6? END_OF_DOCUMENT_TOKEN_TO_BE_REPLACED