A year ago I wrote a post to compare the top currencies dynamics against Gold inside of the year. Today I want to repeat the experiment to see which one could beat the safe haven and which one couldn't. This time, you will see a modified version of the chart where the inverse metal crosses show not Gold's (last year version), but the currencies' dynamics for easier eye perception.

To remind you of the short list, there are seven currencies compared: US dollar (USD) and 6 components of the US dollar index placed by weight: Euro (EUR), Japanese yen (JPY), British pound (GBP), Canadian dollar (CAD), Swedish krona (SEK) and the Swiss franc (CHF). 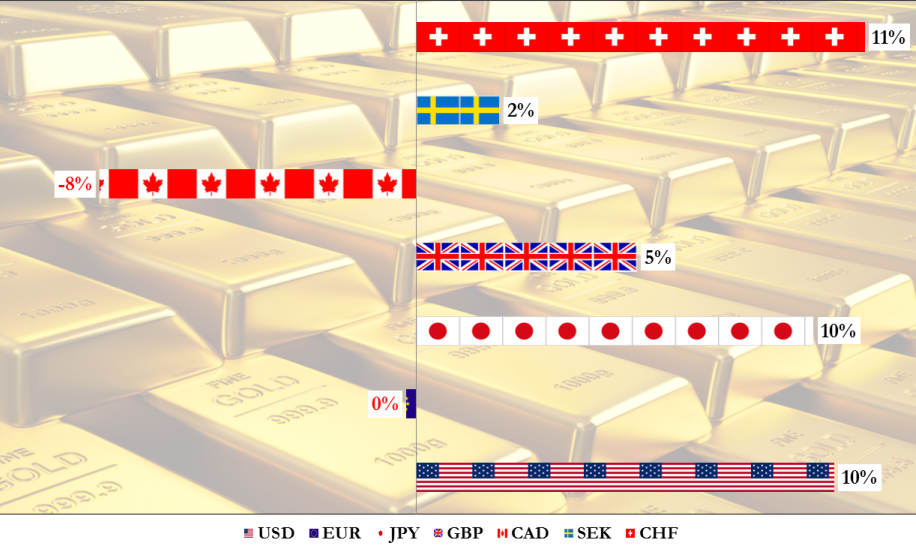 Unlike last year's contest, this time, you can see the strength of currencies across the board with one single exception and one draw. It is interesting to see the zero progress of the second main currency in the world. The Euro has been very volatile this year, but like Gold finished the year on a bearish note.

Three of the currencies have beaten the metal very hard with the minimum dominance of the top winner – the Swiss Franc wins with the ultimate 11% progress year-to-date. Others are the US dollar, last year's winner and the Japanese yen, which was the second weakest a year ago. Both scored 10% against the Gold. The British pound ranked fourth and the last winner is last year's outsider – the Swedish krona.

The only losing currency is the Canadian dollar, but actually, we have two losers, another one is Gold itself as it resumed its downtrend this year hitting new multi-year lows. The poor loonie (nickname of CAD) was hit hard by a crashing oil price and this is the main reason why it lost the game as Gold outweighed crude this year. And the next chart is about this exceptional case. 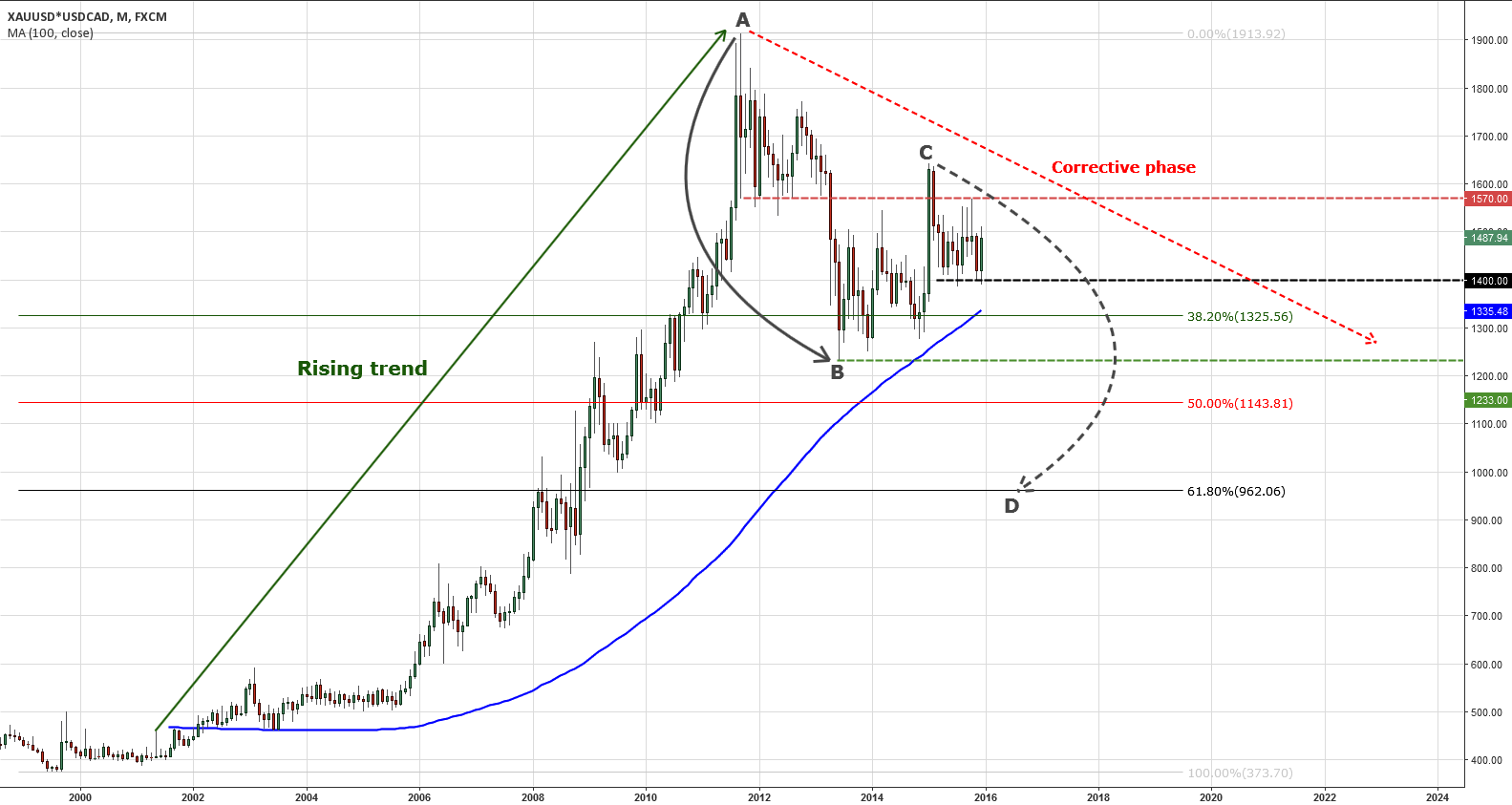 It was uncommon, but Gold has hit new multi-year high at C$1643 at the start of this year against the Canadian dollar. But it couldn't advance higher and most of the year this metal cross has been sideways within a C$1387-1571 range.

Gold is in a long-term uptrend against all paper money and the CAD is not an exception. The metal has advanced five folds against the loonie in 10 years time. After the peak in 2011, the cross has cut back for almost C$700 to hit a 3-year low at C$1233 in 2013 below the 38.2% Fibonacci retracement level. Since then the market has entered the corrective phase.

The market is above the 100-day moving average (blue line) located at the C$1335 level despite the drops. It keeps overall bullish sentiment intact, especially on the monthly chart. But the metal cross should close beyond C$1570 (2015 high, red dashed horizontal line) to attract more buyers.

C$ 1400 level is the first minor support located at the mid of the range (black dashed horizontal line). The next double support at C$1325-1335 includes the above mentioned 100-day MA and 38.2% Fibonacci retracement. The break below it would raise the probability of a more complex and deep correction.

For this case scenario, I put two equal segments to measure the fall. The dashed grey CD segment (CD=AB) could hit the oh so common 61.8% Fibonacci retracement area at C$962 level in case of a negative outcome. This can happen if there's a sudden supply cut or by an unexpected rise in demand for oil.

As I said in the chart title – keep out of this market so far. The Canadian dollar itself can be extremely volatile next year amid an unpredictable future for oil.

Thank you very much for all your feedback on my posts in 2015!