While still privately owned entities, there are still ways for investors to hop aboard this exciting new enterprise. Satellite telecommunications hasn't been an industry in focus for Wall Street analysts, but rapidly growing interest in spaceflight and space-related technology means that these companies may be about to enter a new bullish environment that could last decades.

A Satellite Network With Long-Term Growth In Mind

Iridium Communications Inc. (NASDAQ:IRDM) is a $715 million small-cap communications company known for its Iridium brand telecommunication satellites that services the entire globe. The company's satellite provides a number of services such as data connection, weather reports, global positioning, and virtually any other form of data that requires two-way communication.

Iridium recently launched its new Iridium NEXT satellites and is expected to fully deploy them by 2017. The company is also expanding into the expanding machine-to-machine (M2M) market which is currently its fastest growing segment.

The company reports 1st quarter earnings later this month, and investors should expect to see pleasant results. Iridium has reported an upside surprise for the last three consecutive quarters with an average beat of more than 15%.

Looking at its chart reveals good news as well. 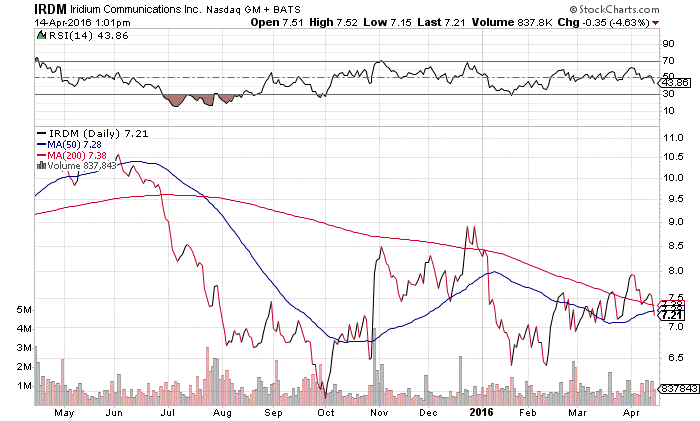 Fundamentally there's a lot for investors to like as well. The stock trades at just 9.5 times earnings – well beneath the industry average of 18 and has a long-term EPS growth rate of 12.5%. The book value of the stock is $12.87 per share making it highly undervalued at its current price.

For investors looking to take advantage of SpaceX, Iridium could be a good play. The new developments in rockets like the Falcon 9 helps lower launch costs and reduce risks associated with putting a satellite into orbit. As SpaceX continues to grow and improve efficiencies, Iridium should benefit.

Looking forward, the stock looks fairly valued at around $13 per share – a staggering 80% potential

One thought on “A Value Stock That's Out Of This World”