U.S. oil inventories have increased by 20 million barrels since OPEC’s cut went into effect. Preliminary estimates of imports from OPEC members reveal an increase in the four-week trend of 77,000 b/d thus far in January from end-December. The largest increase, 148,000 b/d, was from Saudi Arabia. 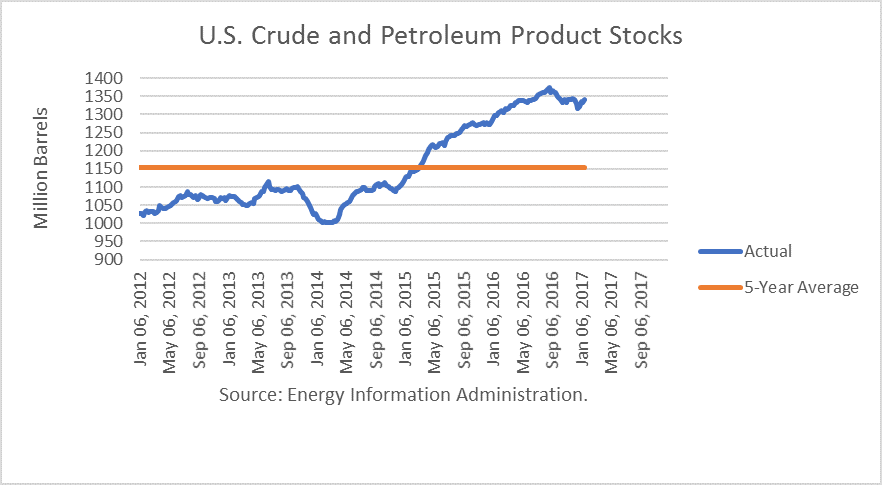 I also observed that Saudi Arabia and Russia have masqueraded seasonal declines as their cuts. The Saudi cut of 486,000 b/d is a typical decline from production in the summer, when its domestic demand peaks. This year, instead of reducing its production after the summer, as it normally does, it waited until the OPEC meeting. (The graph below shows the seasonal decline in production from summer peak to the autumn in each year.) 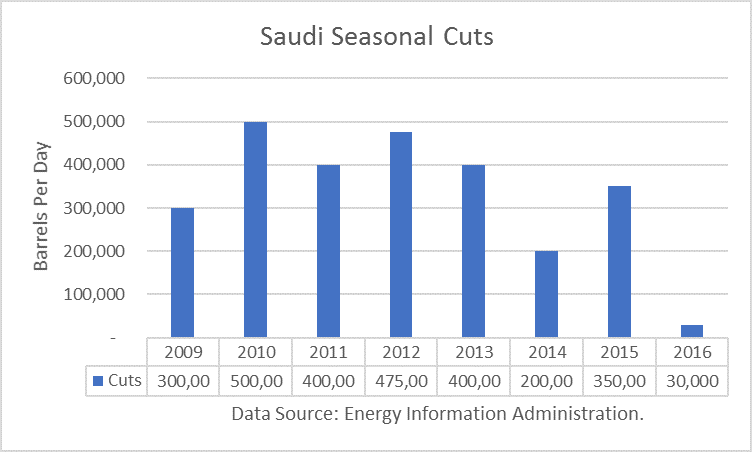 Russia’s production peaks in the winter due to the freezing-over of producing areas in Siberia. Russia agreed to reduce production by 300,000 b/d over the first half of 2017, which is about as big as the normal seasonal decline expected by the Energy Information Administration (EIA).

Furthermore, the Saudi energy minister, Khalid Al-Falih, and the OPEC Secretary General have boasted that the cuts will be enough to drain OECD stocks in six months back to their 5-year averages. Mr. Al-Falih went so far as to say the cuts might expire after six months because they do not want to create a shortage.

OPEC’s words have set false expectations and have raised, and for the most part kept, oil prices to artificially high levels. According to CFTC data on the Commitments of Traders, speculative long positions have reached new highs. 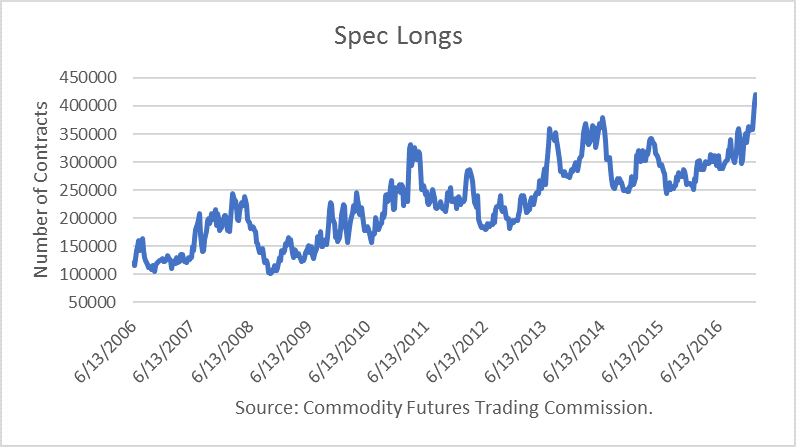 This raises doubt about the capacity of new buying to continue to push prices higher. And implies that a bearish catalyst could set-off a long liquidation. A possible bearish catalyst could be little or no impact of the OPEC cut appearing in U.S. crude imports, frustrating OPEC’s attempt to push OECD levels down.

According to my analysis, U.S. crude imports from OPEC averaged about 3.0 million barrels per day in 2016. In the table below, I provide the average imports for the first quarter of 2016 from OPEC countries. I have multiplied that by 10% as the maximum expected cut. (The production cuts were 4.7% across-the-board but long-term contracts with oil companies generally allow for a 10% variance at most.) The cuts total about 200,000 b/d.

I do not expect voluntary cuts from Venezuela or Nigeria. Nigeria is exempt from OPEC’s agreement, and the new Venezuelan oil minister has said that his country’s exports will remain “steady” to the U.S.

The U.S. is the third largest petroleum exporting country in the world behind Saudi Arabia and Russia. Petroleum product exports have risen to about 5.2 million barrels per day and have been rising sharply.

Net petroleum imports have recently fallen to under 5 million barrels per day. This implies that the U.S. is importing more about 5 million barrels of crude for the sole purpose of processing it into products for a profit.

The level of imports will therefore be largely impacted by U.S. refining margins. The more profitable it is, the higher imports, and vice-versa.

Therefore, even if OPEC members reduce their exports to the U.S. by 200,000 b/d, oil refiners would likely make up the difference by importing from other sources, such as non-OPEC producers if the economic incentive justifies it.

If imports are not reduced, I believe we will see a sizable stock build over the next few months, and that may be a strong bearish catalyst to the market because OPEC is not meeting its goal even with cuts. In the table below, I provide my base case U.S. forecast for this quarter, which implies a large build in total U.S. inventories. 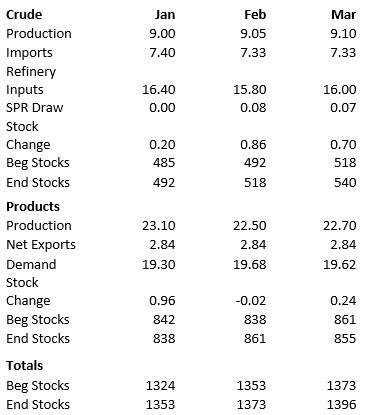 Note: I have included the Energy Department’s estimates of drawdowns from the Strategic Petroleum Reserve. Late in 2015, Congress authorized almost 200 million barrels in sales over the next 8 years to fund different bills as shown below.