Facebook Inc. (NASDAQ:FB) is due to announce earnings on July 26th after the market closes. Facebook tends to be volatile after earnings are announced and typically pop to the upside as Facebook’s earnings have continued to post robust growth. Back on June 2nd, 2017, I authored an article “Facebook Will Hit $175 By Year End” and with five more months to go before the end of the year, I think Facebook has a good chance of breaking through this number. Facebook has been on an uptrend heading into earnings and currently sits at $160 per share and while the stock is up 39% YTD. These numbers may seem staggering, and some would state that buying at these levels would be cashing the stock. Normally I would agree with this approach. However, I think Facebook is an exception to this situation. Even at these levels and YTD appreciation, factoring in Facebook’s projected growth with tech comparators such as Alphabet Inc. (NASDAQ:GOOG), Netflix Inc. (NASDAQ:NFLX) and Amazon.com (NASDAQ:AMZN), collectively known as the FANG stocks, Facebook is superior with a lower risk profile. Facebook’s projected growth is greater than Google’s and just shy of Amazon’s yet has a P/E ratio that’s lower than Google’s and a fraction of Amazon’s and Netflix’s. Regardless of the upcoming earnings announcement, this will be an immaterial event to the long term narrative for Facebook investors. I feel that Facebook represents value even after this massive run YTD and continue my long thesis.

Facebook’s ecosystem includes its flagship Facebook social media platform, Instagram, Messenger, and WhatsApp while the company is making inroads into virtual reality via Oculus. All these digital platforms are ubiquitous as society migrates to social, mobile and cloud as the primary means of conducting business and personal communication. Facebook and its properties have dominated the social media landscape for years and will likely continue its dominance.

Facebook has posted robust growth in all metrics pertaining to user growth and engagement while monetizing has moved in lock-step, the latter more specifically in the last few years. Facebook's earnings growth has been tremendous and has posted accelerating revenue growth over the past 4 years. EPS has increased from $0.02 at the end of 2012 to $3.56 at the end of 2016. For such a large capitalization company such as Facebook, this growth is very impressive. Utilizing the previous 4 quarters as a barometer, this growth doesn't appear to be slowing down anytime soon while silencing rivals such as Snap Inc. (NYSE:SNAP) in its path. Facebook makes acquisitions to drive the business now with Instagram and WhatsApp and into the future of virtual reality with Oculus. Based on my analysis, Facebook provides the most durable growth out of all the other FANG stocks with a lower P/E and PEG ratio and thus provides a margin of safety. Facebook has plenty of room to appreciate into the years ahead given its growth, and even if the stock appreciates to ~$200 range later this year, it will still be inexpensive on a relative basis. Facebook makes a compelling case that it is the superior choice for long term growth with a low-risk profile.

Facebook and its properties have witnessed a virtual monopoly in the general social media space logging more than 2 billion users worldwide. Instagram has witnessed phenomenal growth over the past few years as well logging 700 million users. Recently, Snapchat was projected to be a major threat to Facebook and its social media dominance. Snapchat was met with strong resistance when Facebook launched a direct competitor with Instagram Stories. In August of 2016, the launch of Instagram's clone of Snapchat's Stories coincided with a substantial decrease in Snapchat's growth. By October of 2016, Instagram Stories had 100 million active users, just shy of Snapchat's total number of 153 million at that time. Now Instagram stories has over 250 million daily active users far exceeding Snapchat's user base of 166 million.

It's clear that Facebook has out-competed Snap at its own game while potentially arresting any future growth. I think Snap was the most legitimate potential competitor in the social media space and now it's clear that Facebook retains the title of the go-to platform for users and advertisers. To further substantiate this thesis, recent data has demonstrated plummeting app downloads for Snapchat. SensorTower a firm that tracks app analytics showed Snapchat's year-over-year downloads had dropped 22% in the first two months of the second quarter in 2017. All this while Instagram downloads have grown and WhatsApp released its own version of Stories to further the arresting of Snapchat's growth.

Now that Facebook has cloned nearly all of the Snap features, it's also targeting Snap's bottom line. It was reported that Facebook is offering free trials and credits for many of its advertising options in an effort to sequester advertisers and decrease the likelihood of deploying advertising dollars into the Snap platform. I think it's clear that Facebook is trying to obliterate Snapchat to further its dominance and send a message to others that may be attempting to encroach on Facebook's turf.

Morgan Stanely (MS), Snap's lead underwriter for its IPO recently downgraded the stock to $16, a $1 below its IPO price. Morgan Stanely cut its rating to equal-weight from outperform and slashed its target price from $28 to $16. Morgan Stanley also cut its expectations for daily active users by 1.6% to 182 million for 2017. Additionally, Snap could see a fresh row of selling following its July 29th expiration of the stock's lock-up period. At this point, insider investors will be allowed to unload their shares on the open market creating additional supply. Snap currently sits at $15 per share, a 50% haircut from its ~$30 high post-IPO. Collectively, Facebook appears to have successfully de-risked the threat from Snap, and perhaps this is revenge for not accepting Facebook's $3 billion offer. 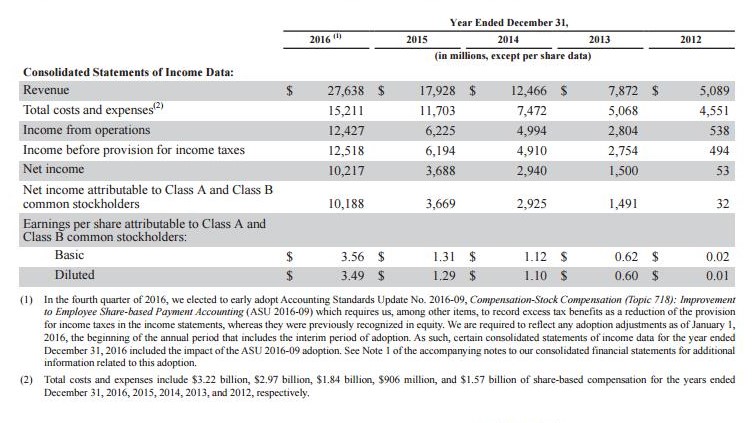 Facebook trades at ~$160 per share with a P/E ratio of 40 and a PEG ratio (P/E ratio divided by growth rate) of 1.57 suggesting an annual growth rate of 25% in EPS. Typically any value less than 1.5 is a good indicator that stock is attractive if the growth is robust. EPS the end of 2016 was $3.56 thus factoring in a 25% premium we arrive at $4.45. Assuming Facebook continues to trade at a P/E of ~40, this translates into a stock price of $178 per share. I think Facebook could post earnings closer to $5.00 per share this year so this may be conservative. Currently, similar high growth technology companies such as Google, Amazon, and Netflix currently have P/E ratios of 33, 189 and 212 and PEG ratios of 1.85, 6.86 and 3.58, respectively (Table 1). Facebook's projected growth is greater than Google's and just shy of Amazon's yet has a P/E ratio that's lower than Google's and a fraction of Amazon's and Netflix's. On a relative basis, Facebook is inexpensive as compared to other large growth tech companies that make up the FANG cohort.

Table 1 - Comprehensive valuation and growth overview of the FANG stocks

The upcoming earnings for Facebook Inc. (NASDAQ:FB) are a non-event in my opinion as Facebook represents value even after this move YTD. It's the most compelling high-growth tech stock as compared to its cohort that's comprised of Amazon, Netflix, and Google. Facebook and its properties are clearly the go-to social media platform for both users and advertisers now that Snap appears to have met its demise. Facebook has shown gangbuster growth in revenue, EPS, and free cash flow and has continued this trend through Q1 2017, posting double digit growth across all metrics. Any competitive threats from Snap have been put to rest in my opinion with Instagram Stories not only arresting Snap's growth but eclipsing Snap's daily active users by a wide margin. Assuming Facebook continues to trade at a P/E of ~40, this translates into a stock price of $178 per share by year end. It's noteworthy to point out that Facebook's projected growth is greater than Google's and just shy of Amazon's yet has a P/E ratio that's lower than Google's and a fraction of Amazon's and Netflix's. On a relative basis, Facebook is inexpensive as compared to these other large growth tech companies, and I feel Facebook is the superior stock with a lower risk profile regardless of earnings next week.

Disclosure: The author currently hold shares of Facebook (FB) and is long FB. The author currently has a covered put contract on FB with a strike of $160 and expiration of 28JUL17 for a premium of $8.00 per share. The author has no business relationship with any companies mentioned in this article. He is not a professional financial advisor or tax professional. This article reflects his own opinions. This article is not intended to be a recommendation to buy or sell any stock or ETF mentioned. Kiedrowski is an individual investor who analyzes investment strategies and disseminates analyses. Kiedrowski encourages all investors to conduct their own research and due diligence prior to investing. Please feel free to comment and provide feedback, the author values all responses. The author is the founder of stockoptionsdad.com a venue created to share investing ideas and strategies with an emphasis on options trading.