The Energy Information Administration (EIA), International Energy Agency (IEA) and Organization of Petroleum Exporting Countries (OPEC) each released their monthly global oil assessments and projections. They agree that the global oil glut will not be whittled down to anywhere near OPEC’s target of the 5-year OECD average by year-end. Their numbers also imply that global inventories in 1Q18 will build.

The EIA numbers indicate that stocks will be 130 million above the average, just slightly below September’s estimate at end-March. 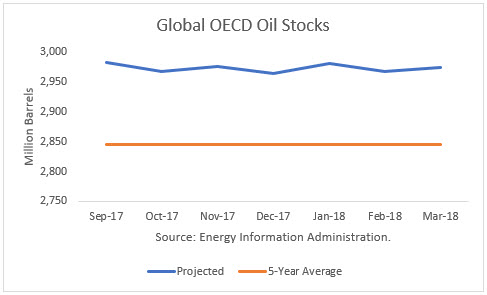 OPEC does not project its own production, and it, therefore, does not produce future global inventory levels. But assuming September OPEC production for 4Q17 and 1Q18, stocks will drop by 51 million barrels in 4Q17 and rise by 74 million in 1Q18, a net gain in inventories from September. 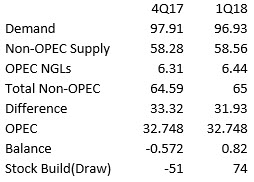 The IEA also projects that inventories will rise by 800,000 b/d in 1Q18. That is the same as the OPEC figures above.

Therefore, based on all three projections, OPEC will fail to meet its target by the current ending date of the OPEC deals (March 2018). Russia has indicated that it will wait until March to assess market conditions to determine whether it will extend the deals longer. An extension through 2018 has been floated. 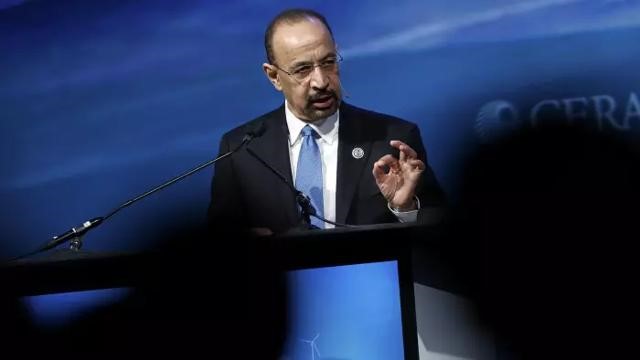 In March 2017, Saudi Energy Minister Khalid al-Fahil made it clear that the production cuts were designed as a short-term tool, not a long-term strategy:

The Saudis would have to, in effect, go against its own conclusion that long-term market intervention is ineffective. In particular, this time around, the elasticity of supply has proven to be higher than ever before due to short-cycle shale oil. In addition, a record number of “drilled-but-uncompleted” wells (DUCs) are in inventory.

The outlook above suggests that if OPEC does not extend the deal, a massive “slug of oil” will return to the market, even if it is phased-in, as suggested by the Russian energy minister.
But a new uncertainty of potentially significant magnitude is now in the mix. President Trump has threatened to end the Iran’s nuclear deal if a better solution is not found. 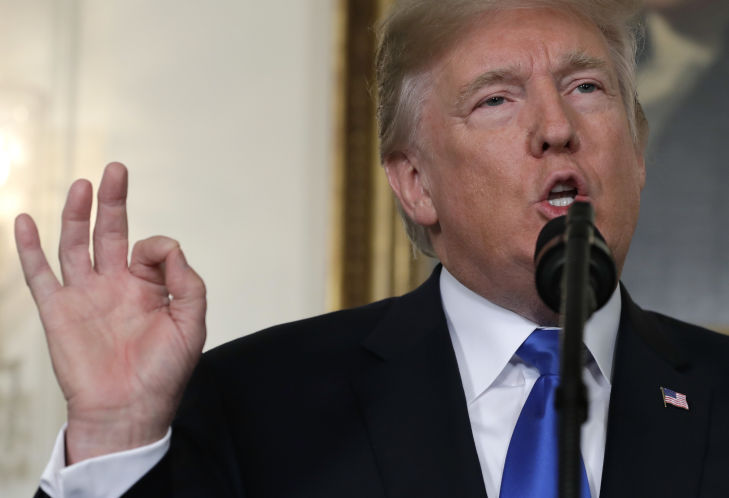 In his speech on October 13th, President Trump stated:

“Congress has already begun the work to address these problems. Key House and Senate leaders are drafting legislation that would amend the Iran Nuclear Agreement Review Act to strengthen enforcement, prevent Iran from developing an inter- — this is so totally important — an intercontinental ballistic missile, and make all restrictions on Iran's nuclear activity permanent under U.S. law. So important. I support these initiatives.

“However, in the event we are not able to reach a solution working with Congress and our allies, then the agreement will be terminated. It is under continuous review, and our participation can be canceled by me, as President, at any time.”

According to The Washington Post, “U.S. law requires Trump to waive nuclear sanctions regularly, so he could simply not do anything, and nuclear sanctions come back. In effect, that would terminate the deal, whether the other partners like it or not.”

Congress has 60 days from October 15th to develop a new solution. Trump has into January to decide whether to waive the sanctions.

Market conditions appear to be more supportive for oil prices going into the year-end. Lower inventories and a ‘risk premium’ due to the uncertainty surrounding the Iran nuclear deal argue for higher prices. Also, the latest CFTC Commitments of Traders data show that American oil producers are lifting hedges rather than adding them to futures prices over $50/b, which removes (or raises) the ceiling that had kept prices in a trading range.

In the first quarter of 2018, the market shifts back into an oversupply situation. But oil prices will depend on how the U.S.-Iran tug-of-war plays out.