Crude prices bottomed in the current price cycle during the third week of June. Subsequently, there has been a surge to the highest crude prices in two years. My theory is that the market has priced-in a geopolitical risk premium given the de-certification of the Iran nuclear deal by President Trump as signaled by the White House on October 5th.

Another factor has emerged. It has become increasingly clear that the DOE’s estimates of weekly U.S. crude production have overestimated the actual monthly figures, as reported two months in arrears. The errors since April have been large. Some have concluded that American shale oil production is not as big of a countermeasure to rising oil prices as had been believed.

A closer look at the underlying production data reveals that an underperformance of shale oil production was not a major cause of the overestimation of weekly production. Unscheduled maintenance in the Gulf of Mexico (GOM) and other variations also contributed to a lull in production. 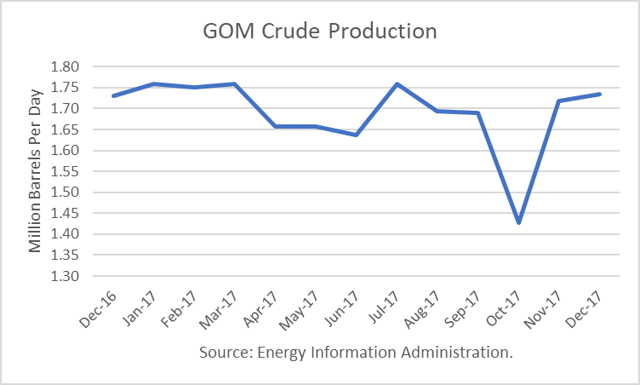 GOM production experienced unscheduled maintenance in April through June, had normal maintenance in August and September, and was impacted by Hurricane Nate in October. The DOE projects a return to levels seen in January through March during November and December. 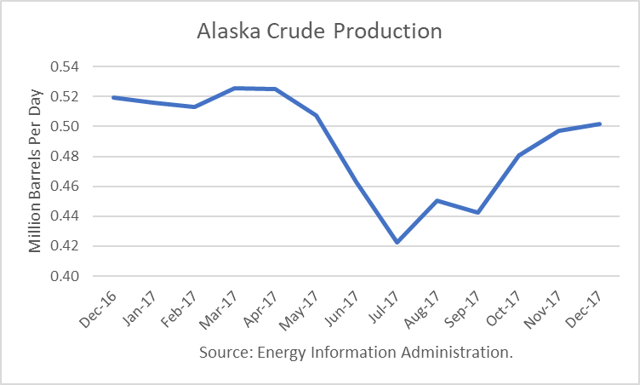 But according to DOE estimates, shale production growth has been fairly consistent, though off, some most likely due to a lagged effect of lower prices experienced in March through June. 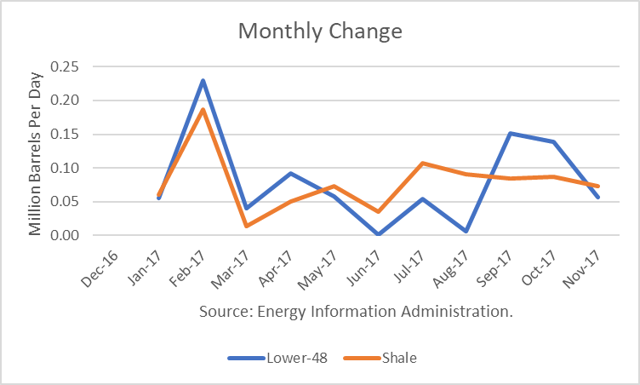 In their Short-Term Energy Outlook (STEO) for November, the DOE projects stronger growth in production for November and December, as maintenance issues dissipate. For the first week of November, it estimated crude production at 9.620 million barrels per day (mmbd), the highest one-week figure in the database going back to 1983. 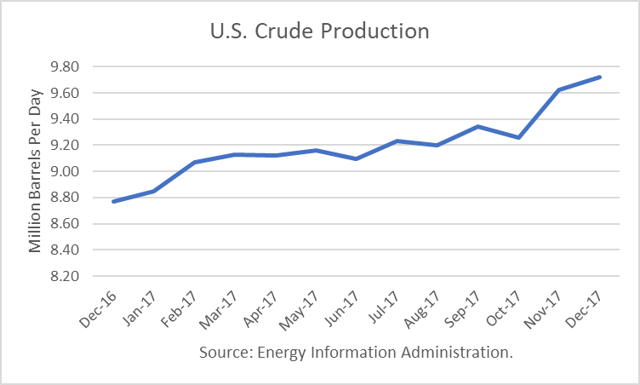 The Baker-Hughes oil-directed rig count had bottomed in May 2016, following the collapse in oil prices. Since then, it had been in recovery mood until August 2017. Lately, it has been dropping off, giving the market greater confidence that future shale production growth would not perform as has been expected. 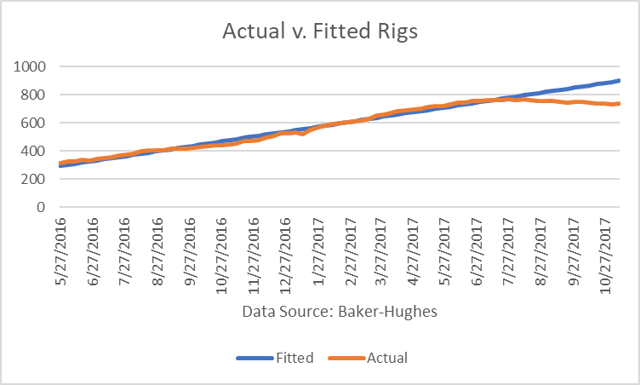 However, with the rise in prices since June 2017, the rig count responded (with a lag) in the week ending November 10th with a rise of 9 to 738. Though only a one-week change, this development may signal the start of a new upward surge in rigs. 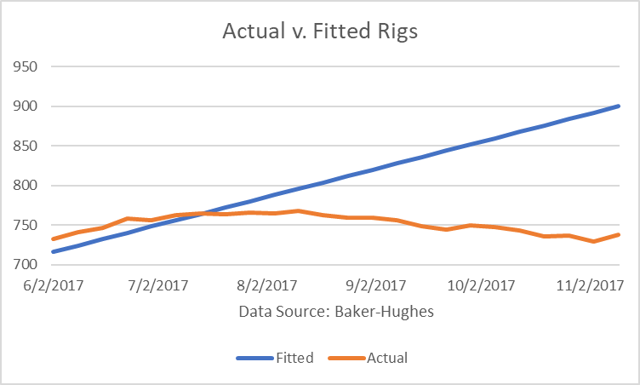 U.S. producer hedging had played a role as a substantial headwind to any sustained or significant oil price recovery. Hedge shorts had, in fact, increase significantly over the period from June 2014 through the spring of 2017. 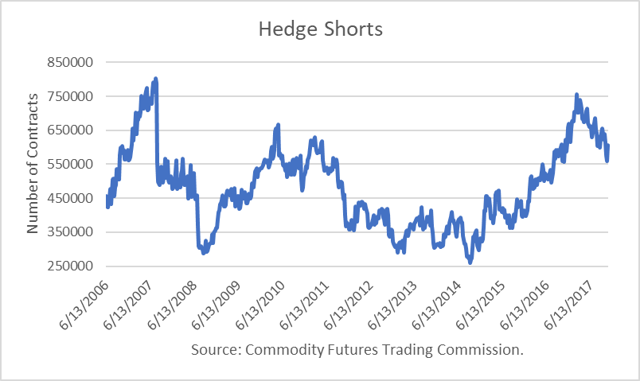 But since mid-July 2017, producers have liquidated (bought) over 100 million barrels of its hedges back. The buying frenzy was particularly strong between the weeks ending September 19th and October 24th. But in the week ending October 31st, producers sold 48 million barrels. Perhaps crude futures prices are now high enough to induce much more hedging. 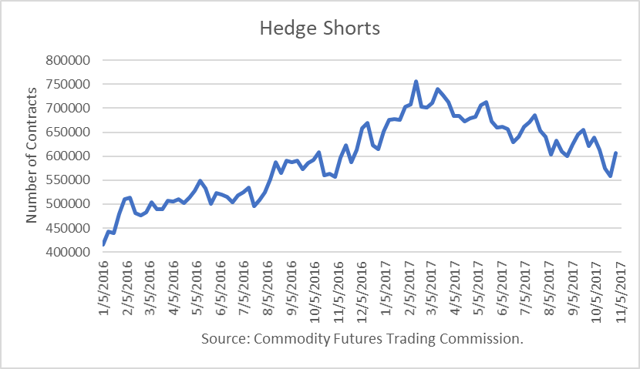 According to OPEC’s annual World Oil Outlook (“WOO”), it projects U.S. tight crude production will rise every year through 2022. At the same time, it projects the demand for its crude to be constrained not only through 2018 but for the next five years. 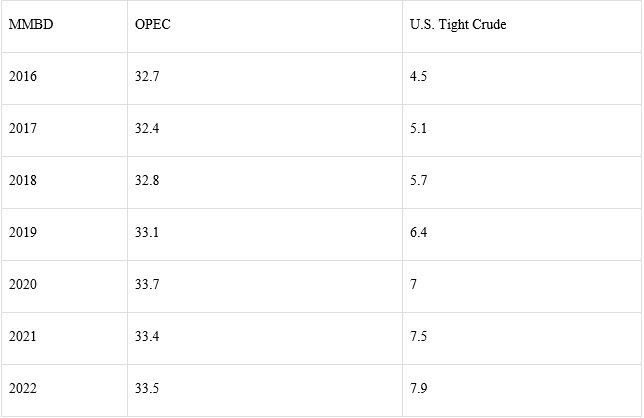 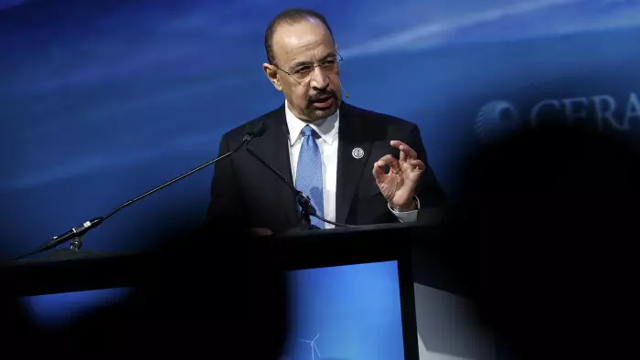 Khalid Al-Falih: 'I am optimistic about the global market outlook in the weeks and months ahead' © Bloomberg

In the speech he stated:

“Saudi Arabia will not allow itself to be used by others. My colleagues have heard that privately, and I am saying it publicly. This is for the benefit of all and needs to be achieved by the contributions of all," he said. "But this time around, we made it clear that we will not bear the burden of 'free rides,' and both groups are reinforcing one another through voluntary management of their production."

He made it clear that the production cuts were designed as a short-term tool, not a long-term strategy.

And so his statements and OPEC’s outlook begs the question of whether KSA would favor limiting OPEC production over the next five years (as implied by demand) while allowing shale oil producers to capture a significant growth in market share.

The recovery in oil prices, which had its highest close on Monday, has created a euphoria among investors and columnists who had lost a great deal of their capital in oil equities since 2014 or were proven to be wrong as prognosticators. A good example of the latter was an article published Monday announcing that the bull trend in oil prices "had just begun."

The upcoming OPEC meeting and a showdown between the U.S. and Iran on the nuclear deal can keep prices from dropping much through year-end. But assuming the U.S.-Iran issue is resolved peacefully, and the seasonal decline in demand takes hold in January, coupled with inventory builds, producer hedging, higher rig counts, and rising shale oil production, the price bubble is likely to burst.