It’s been an eventful couple of months for Hasbro Inc. (NASDAQ:HAS), the third largest toy maker in the world with Toys R Us filing for chapter 11 bankruptcy and a rumored acquisition of rival toymaker Mattel Inc. (NASDAQ:MAT) all while the stock has been trading erratically in the backdrop with 10% swings in the stock price. As a result of the Toys R Us bankruptcy filing, Hasbro had to lower its guidance through the holiday season, and as a result, shares initially tumbled 9% on the news. Recently, Hasbro had witnessed a huge sell-off from its 52-week high of $116 to $88 or a 24% slide after reporting its most recent quarterly results with lowered guidance due to the Toys R Us bankruptcy filing. Hasbro develops toys for many of the multi-billion dollar movie franchises such as Marvel Universe, Star Wars, Disney Princesses, Frozen, Transformers and Jurassic World. Hasbro has many catalysts in the near term with major movie franchises coming into the fray with upcoming Disney releases: Thor: Ragnarok and Star Wars: The Last Jedi to round out 2017. It's noteworthy to point out that Thor: Ragnarok has topped $675 million thus far at the international box office and closing in on the $750 million mark in theatrical release rising to the 10th highest grossing movie in 2017. In 2018, Black Panther, Avengers: Infinity War, Star Wars Han Solo spinoff and Ant-Man and The Wasp to highlight a few major movies. Taking into account Hasbro’s growth, the potential acquisition of Mattel, Q4 2017-Q2 2018 catalysts, trading at a P/E of ~20, boasting a 2.4% yield and initiatives within Hasbro Studios to propel growth further presents a compelling buy after this recent sell-off below $100 per share.

Toys R Us sent shock waves through the toy makers after it announced that it was filing for chapter 11 bankruptcy before the biggest holiday season in calendar Q4. Hasbro was hit particularly hard on the news especially after the company lowered guidance as a result (Figure 1). Hasbro is working with Toys R Us through this bankruptcy process and will continue to do business with the struggling retailer. Per CEO Brian Goldner, "It's taken us a month to get a plan together and a new agreement with them which we signed." To mitigate the Toys R Us impact, Hasbro has also built out its retail footprint and direct-to-consumer digital channels. It's expected that Toys R Us will emerge from bankruptcy and hopefully, this will only serve as a temporary headwind for Hasbro. Hasbro is managing this transition and aiming to circumvent any negative impact on revenue via opening more channels to its products and expanding its other business units.

Hasbro reportedly made an offer recently to acquire Mattel, the maker of Barbie and Hot Wheels. This acquisition would combine the two largest U.S. toy makers to create a massive umbrella of some of the biggest toy franchises. Per Mattel CEO Margo Georgiadis, 62% of the growth in the global toy industry over the next four years is expected to come from emerging markets, which is slated to add $20 billion in sales by 2021 with most of that growth coming from emerging markets. Hasbro and Mattel have been in talks before: In 1996, when Mattel was the would-be acquirer and early last year, with Hasbro as the would-be acquirer.

Mattel has been struggling over the past few years along with its plummeting stock price. All of Mattel's major business units saw steep sales declines in Q3. After earning nearly $1.4 billion in 2013 and $823.5 million last year, it's projected to deliver just $459 million this year. Mattel certainly isn't the powerhouse it once was, and a combination of the two companies may provide a great synergy.

Recently, Mattel has rejected Hasbro's latest takeover approach, casting uncertainty over the potential combination of the world's two largest toy companies. Mattel's rebuttal indicates that Margaret Georgiadis, who took over as the company's chief executive in February, is seeking a higher valuation in negotiations with Hasbro, even though Mattel's stock has significantly underperformed its rival Hasbro. Mattel has informed Hasbro its proposal undervalues the company and does not take sufficiently into account the potential for regulators to reject the deal based on antitrust concerns.

With Q4 underway (historically one of Hasbro’s strongest quarters), I think Hasbro can produce a strong quarter to round out 2017. It’s noteworthy to point out that Hasbro has exclusive rights with Disney to produce Marvel Comics and Star Wars toys which last through 2020 and Hasbro is also the licensed doll maker for the Disney Princess line (Moana and Frozen are included) which started on January 1st, 2016 (Figure 2). 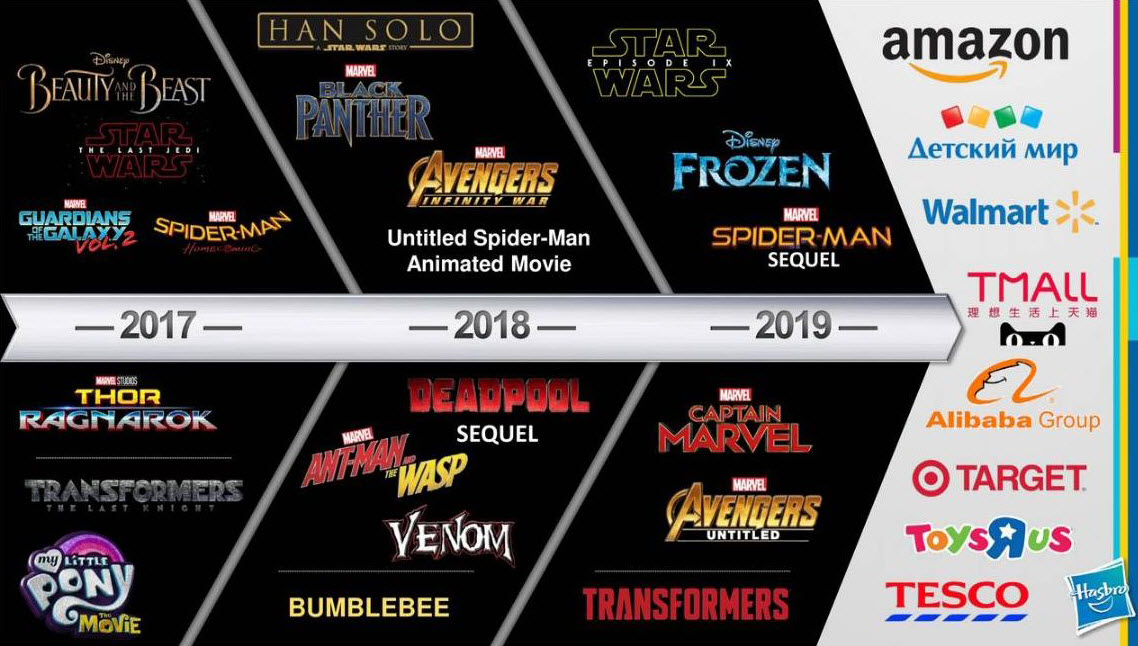 Specifically speaking to Disney’s release schedule of Thor: Ragnarok and Star Wars: The Last Jedi to round out 2017 and Black Panther, Avengers: Infinity War, Star Wars Han Solo spinoff and Ant-Man and The Wasp coming in the front half of 2018 bodes well for Hasbro’s relationship with Disney.

Hasbro Studios has made a major push into original content as of late. Hasbro released its first movie with My Little Pony: The movie in October and is projected to accelerate revenue in the digital and merchandise channels. Thus far the movie has grossed just over $50 million at the international box office. Hasbro has also created a new animated series, Stretch Armstrong which will premiere on Netflix (NFLX). Hasbro Studios will reimagine the classic Stretch Armstrong into a new teenage superhero animated series into a relatable kids adventure.

Recently, Hasbro Inc. (NASDAQ:HAS) filed a debt securities shelf registration with an undisclosed offering to grow its future business. "As we seek to grow our business in entertainment, licensing and digital gaming, we will continue to evaluate strategic alliances, acquisitions and investments, like Hasbro Studios, Boulder Media, the Network and Backflip, which may allow us to build out our competencies around the brand blueprint, such as in storytelling and digital, complement our current product offerings, allow us entry into an area which is adjacent or complementary to our toy and game business." These Hasbro initiatives will ensure growth and diversification beyond their core toy business.

Hasbro reported its Q3 2017 numbers that beat on EPS and revenue with $2.05 (beat by $0.11) and $1.79 billion (beat by $10 million), respectively. The stock subsequently dropped from $100 to $88 or a 12% decline shortly after that. This was on top of the $116 to $100 drop after last quarter's earnings. The latest decline was largely due to the lowered guidance as a result of the Toys R Us bankruptcy filing. Hasbro grew its business across all categories such as Franchise Brands, Hasbro Gaming, and Emerging Brands as well as geographies. I think this sell-off presents a great buying opportunity for a high-quality growth company that consistently beats quarterly EPS estimates at any level below $100 per share (Figure 3). 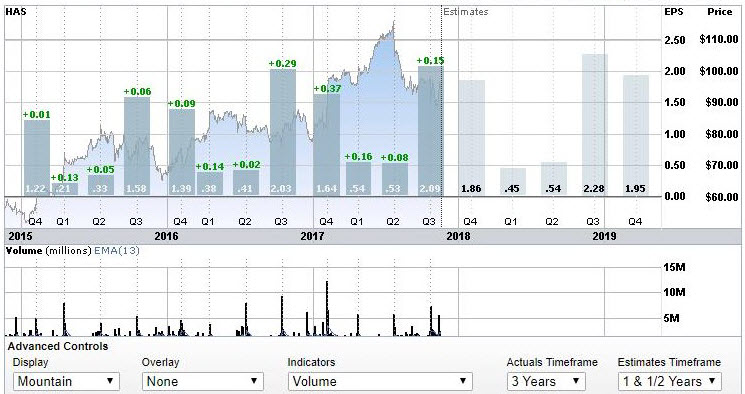 Hasbro Inc. (NASDAQ:HAS) has many catalysts on the horizon such as the potential acquisition of Mattel, Q4 2017-Q2 2018 movie slate, trading at a P/E of ~20, boasting a 2.4% yield and initiatives within Hasbro Studios to propel further growth presents a compelling buy after this recent sell-off below $100 per share level. With the stock trading 20% off its highs with an attractive yield I think this presents a compelling long-term buying opportunity. With inroads into film via My Little Pony and Stretch Armstrong and a slew of major blockbusters though 2018, I think Hasbro has a great growth runway ahead of itself especially into weakness as of late. Despite the Toy R Us bankruptcy filing, Hasbro looks to be managing this relationship with further penetration into digital and footprint channels of distribution to mitigate this factor. Additionally, any potential deal between Hasbro and Mattel will be a long-term growth catalyst with added franchises and synergies between the proposed combined entity.