Last October I focused on the rare case when the price of palladium, for the first time in many years, could surpass the usually dominant platinum price. Both, common sense and chart analysis of the palladium price suggested that the triumph of this metal could be temporary. In the charts below, we can see if this conclusion turned out to be right. 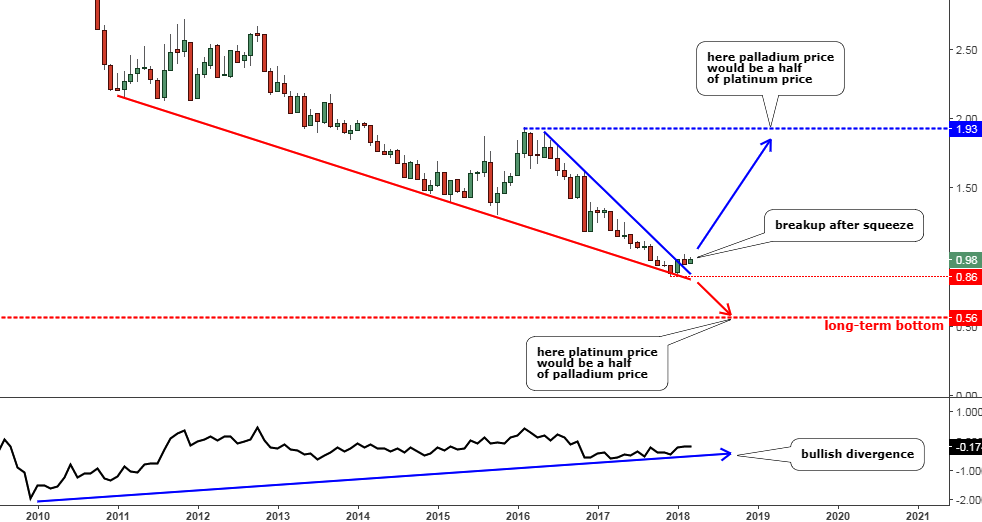 This time I would like to start with the chart of the relative strength of the two metals which is clearly traceable through the platinum/palladium ratio. This ratio is falling sharply from the 2009 high at the 6.09 oz showing the dramatic weakness of platinum compared to palladium. In the chart above, I only show you the period when the drop started to decelerate, and the trend turned flat.

The red downward trendline has several touch points offering support for the price. Last time the ratio tested it was last December, but the support held well. The blue trendline resistance has a sharper downward angle compared to the red trendline support. These two trendlines squeezed the price within and right by the end of 2017 as the pressure became just intolerable and the price broke out to the upside at the start of this year.

The momentum indicator in the sub-chart supported that break up as a bullish divergence that has accumulated since 2010 has finally played out.

If the current explosion could gain further traction to the upside, then the ratio would target the earlier major top at 1.93 oz. where the price of palladium will cost just a half of a platinum price.

On the other hand, below the recent low at the 0.86 oz. there is a risk for the ratio to dive deep to the long-term bottom at the 0.56 oz. ratio where the platinum price would stand only at a half of a palladium price.

The platinum chart has no significant changes, and you can find it here. The price is still within the orange box between the $890 and the $1045 levels. Watch the support area closely as the consolidation could break down soon as platinum approaches the edge. The first target is located in the area of the previous major low at the $752 level.

The price of palladium performed a somersault over the former top (blue dotted horizontal line) as I suggested in my earlier post. It was all done in January, and that’s why its candle showed the strong downside pressure at the end as it has a long upper wick and a bearish body as second resistance rejected the price. This candlestick is called a “Shooting Star,” and it has a reverse effect, which played out immediately.

Currently, the price is drilling the red trendline support. The breakdown of it would terminate the growth structure started in 2016. The first target for the possible drop is quite ambitious as it is located on the back of the orange downside support in the area of $590-600 level. Don’t miss this “Shark Feast” as sellers are around smelling the bleeding palladium.

2 thoughts on “Platinum Could Restore Its Supremacy Soon”