Last September I posted a monthly chart of Copper futures to warn you that the metal has been approaching the area of strong multi-year resistance. In that very same post, I set specific triggers to watch for further price action.

Recently, one of those triggers was broken, and now it’s time to update the chart. 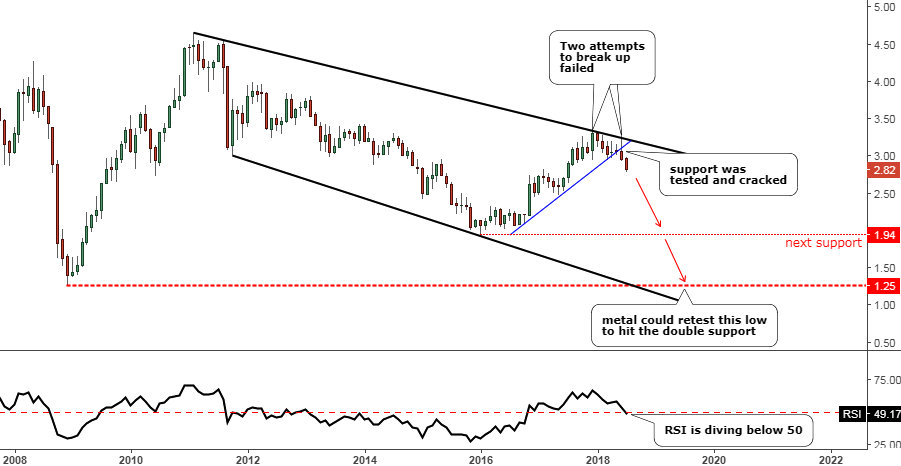 The global chart structure hasn’t changed, and I posted its full reconstruction adding some new annotations to highlight the most recent price action.

Usually, we can’t predict tops and troughs of the market, but that alert about the possible failure of copper ahead of a multi-year resistance paid well. The trend’s touching point was predicted precisely to the cent at $3.32. Just amazing!

The bulls failed to break above the black resistance in two short attempts, and then the bears took the ball to push the price below the crucial support (blue) set last September.

Now a game of probability has been changed into a real trading opportunity. And those who had enough patience, which is a key to successful trading, can take their chance to enter the market after a crucial confirmation. Without it, it could be a seesaw trap, which not all of us could stand for a long time as the market spent half a year within a $2.94-$3.32 range.

Copper could retest the nearest support at $1.94 where the earlier low was established. If bulls cannot protect that support area, then the real catastrophe would emerge sending copper to a major bottom at $1.25. The RSI confirms the breakdown as it is diving below the 50 level.

Those who sold on the trigger could enjoy a paper gain at the current level. If you are not in yet, then the following plan is for you.

As it is a monthly chart above, we should go down to the daily time frame and wait for the correction as this recent drop was too fast and it can’t just drop without a pullback. Once this correction occurs, then there will be a selling opportunity at a higher level to avoid excessive risk. The rules are the same as on the monthly chart, wait for the pullback and draw support beneath (it should look like a blue vertical support that was triggered on the monthly chart above), then sell on the breakdown of it.

The invalidation area for the short is above the $3.32 top.

2 thoughts on “Copper To Retest $1.94 After Breaking Support”