Please look at the chart below, all in all, the invincible metal has scored 29% and hit the top of the chart again in the second place. The lumber futures are also in green as it gained 13%, but it was not enough to beat the palladium. The latter kept resistant to the Pendulum effect this time.

I am very grateful to all of you as you supported this traditional experiment again and again with votes and comments under those posts. 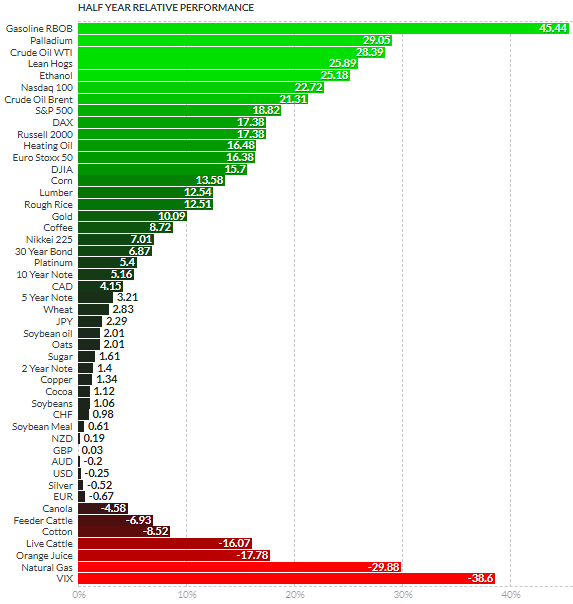 Let us push the pendulum again as we have new names this time, although Palladium was close to being there again and then we should shut down the “shop” for at least another half of a year.

The leader among futures of the past half of the year is Gasoline as it has scored a 45% gain to beat all others with a considerable margin, even palladium. On the opposite side, all in red are VIX futures with minus 39% loss. In my earlier post, I explained why I will never put it on the swing again. So, the next worst performer is Natural Gas, which has lost 30%.

Interestingly, we got two instruments on the race both from energy sphere. Brothers’ battle is to be started here; I think better say nephew vs. uncle as gasoline is a product made from crude oil. Let’s see, in the charts below what we have there.

The champion is the first, so let’s look at Gasoline futures weekly chart.

Gasoline futures have the same chart structure as crude oil. We can find the same breakdown of the red trendline support and a further classic pullback in a retest of it. The red down arrows show us the way the price was expected to move after the completion of a pullback. The former bottom should be retested.

But all of a sudden, the price reversed quite sharply from the $1.663 level and last week it reached a very deep Fibonacci retracement level of 61.8% (not shown). It’s an alarming situation. If the price would break back above the retested red trendline and the former top of $2.156, then the scenario with blue arrows could play out. The price could build a new bullish move to hit the $2.574 target. So, watch both edges of the range between $1.663 and $2.156 for further clues. 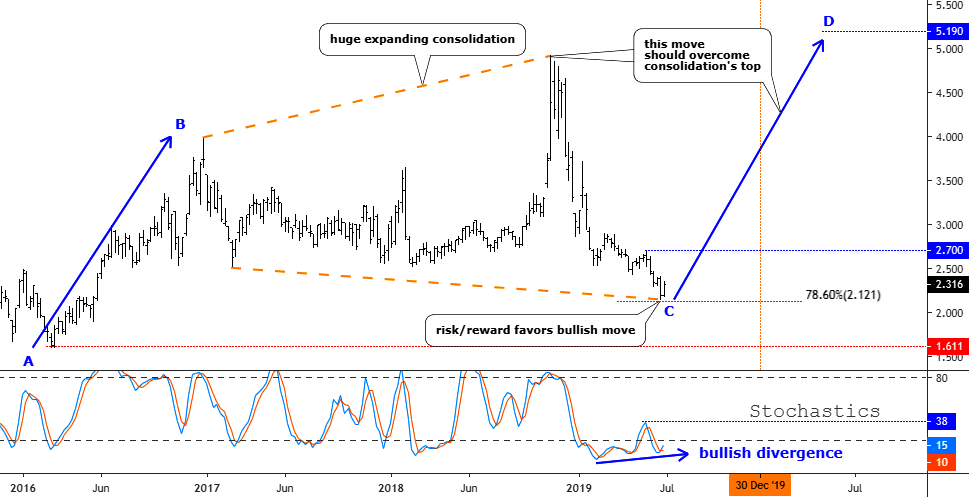 I didn’t follow natural gas, but now I think I should watch it more carefully as there could be a huge profit opportunity in the making. Crude oil, gasoline, and natural gas all have one common bullish move, which started at the beginning of 2016. In the chart above, I marked it as AB segment; the natural gas price more than doubled then from $1.61 to $4. After that, the price dropped in 2017 down to $2.5. Then the sharp zigzag followed in 2018, which managed to break above the former top to hit the $4.93 area. The next even sharper zigzag to the downside has sent the natural gas price heavily down close to the $2 area.

All these crazy moves have shaped the huge expanding consolidation (orange dotted trendlines) after the first move up (AB). It retraced the latter very deeply to the 78.6% Fibonacci retracement level. It took the price more than two years to reach there. So, it is twice as long as the preceding move up, but it is natural for consolidations.

It’s yet to be confirmed that we already reversed to the upside. We got only the first alert on the Stochastics sub-chart. The indicator shows a Bullish divergence amid a strong oversold situation. Higher lows on the Stochastics contradict with the lower valleys on the price chart. I added blue signal lines, both to the price chart ($2.70) and the indicator’s sub-chart (38) on the closest tops for confirmation.

The CD segment should break above the top of consolidation beyond $4.93, and, therefore, its length should exceed the size of the AB segment to do so. I applied the 1.272 Fibonacci ratio to forecast the possible minimum target. It is located at $5.19. This gives more than 90% gain above the confirmation line ($2.70)! What should happen to make the natural gas price rocketing?