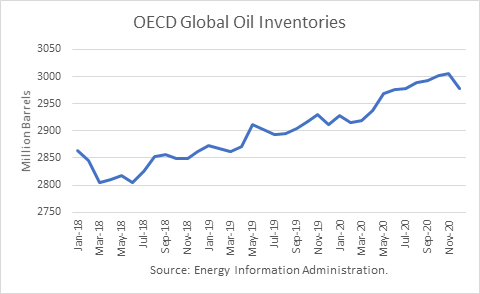 The EIA has confirmed that OPEC production edged higher (23,000 b/d) in August v. July. It is also estimating that OPEC production will average about 29.6 million in 2020, and that figure is about 400,000 b/d higher than OPEC’s August estimate of the call (demand) for OPEC oil in 2020. 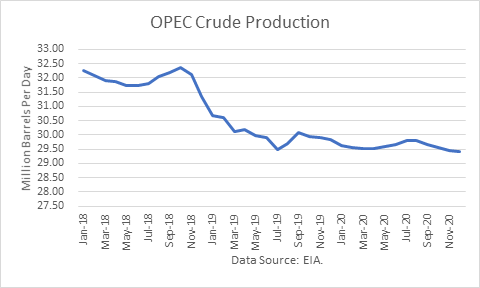 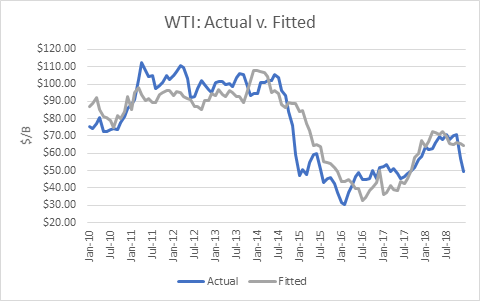 I used the model to assess WTI oil prices for the EIA forecast period through 2019 and 2020 and compared the regression equation forecast to actual NYMEX futures prices as of September 27th. The result is that oil futures prices are presently overvalued for much of the forecast horizon.

After April 2020, it shows the valuations dropping down to where NYMEX futures prices are below $50/b. 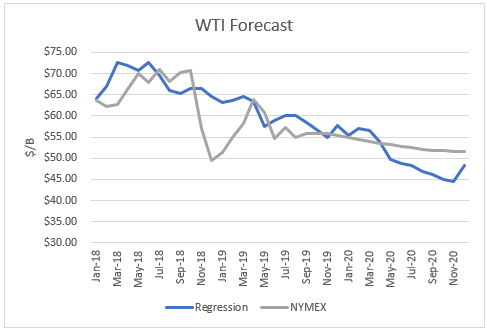 On September 14th, Saudi Aramco’s (ARMCO) Khurais field and Abqaiq plant came under attack, briefly reducing production by 5.7 million barrels per day. However, they reported restoring production by about 50 percent within a couple of days and projected full restoration by the end of September. According to reports from both Reuters and Bloomberg, full production has been restored to pre-attack levels ahead of schedule.

Questions remain whether there will be some kind of response by Saudi Arabia to Iran, or whether Iran will stage another attack, assuming it came from them, and whether a war risk premium will be factored into oil futures prices. The market’s verdict as of September 27th has been to almost totally remove the premium from futures, possibly as a result of Aramco’s proof that it is high resilient even if attacked.

Another uncertainty is whether the U.S. and Iran can find a solution that would lead to an end of sanctions, thereby resulting in a flood of Iranian oil back into the market. Iranian President Rouhani offered a surprising “olive branch” in his speech at the United Nations, and it seems clear President Trump would like to resolve the stand-off to allow the oil market to be flooded to lower gasoline prices prior to the 2020 election season.

Another key uncertainty playing out is the trade war with China. With the presidential election coming in November 2020, it seems likely that China will just wait-to-see if Trump is re-elected before making any meaningful concessions. However, the drop in the value of the yuan has muted the impact of the tariffs on US prices of Chinese goods.

Finally, Venezuela remains a key uncertainty. EIA estimated its production at 750,000 b/d for August. However, it was reported that a Chinese firm has agreed to help the country restore its refinery operations in a trade for oil. The restoration is expected to take six to twelve months and again would frustrate U.S. attempts to bring that country to its knees.

Based purely on the model, oil prices are overvalued for much of the forecast horizon as September 27th. The key uncertainty is a new deal with Iran, which could lead to the reduction or end of sanctions.