The time has come to see if any top currency could rival gold, which established the new all-time-high this year in this traditional yearly post.

Before we jump to the results of 2020, let us see below how you predicted the future back at the end of December 2019. 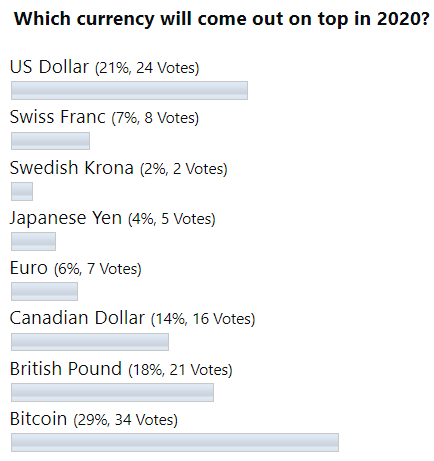 The majority of you bet that the "rookie" Bitcoin would beat all others, including the regular favorite U.S. dollar in 2020. The latter was the second choice a year ago. The third pick was interesting as it was the British pound, which was not in the shortlist of your bets before, but it managed to rank #3 last year.

Let us look at the diagram below to find out the results.

Year-to-date dynamics of top currencies versus gold (as of the close of December 24, 2020): Is crypto here for longer? 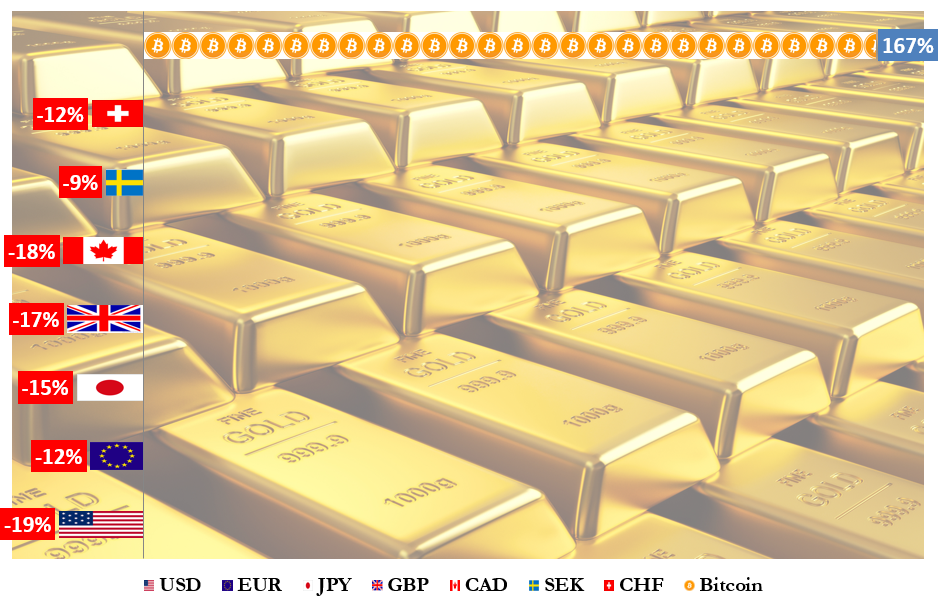 Gold was one of the main headliners this past year, and none of the top currencies could come close to it. Only one intangible rookie could outshine the top metal with a considerable margin. Bingo! You had made an accurate prediction as you chose Bitcoin as the top "currency" this year. You are the most accurate predictors I have ever seen.

Indeed, the crypto "gold" hit all the charts as it gained more than 240% year-to-date vs. dollar, and this month it recorded the new all-time high above $24k. It far surpassed its last year's results with a 167% gain vs. gold compared to +66% booked before. Are cryptocurrencies here for longer? Please share your opinion below.

The "dark horse" of this year, which gained the least of your attention with only two votes, ranked #2 to open the pack of fiat losers. It is a Swedish krona. It was the weakest underdog in recent years as it ranked the last. This time it swapped ranks with the Canadian dollar, which was #2, and now it is #6 where the SEK was last year. At least three factors helped the krona this year: no cuts of the policy rate, no link to the weaker oil and G10 cyclical currency peers, and the "no lockdown" policy, which did not wound the economy so severely as in other European countries.

The Swiss franc and Euro shared rank #3. Both currencies improved their positions from #4 and #5, respectively. The former was considered a safe haven during the turmoil, and with "such a year" like this, the demand for franc was not a surprise. The single currency (EUR) looks good because the U.S. dollar doesn't, as Europe has its big problems.

#4 is the Japanese yen this and last year as there is no change for it in the ranking. The yen gained against the U.S. dollar, and the interest rate gap narrowed due to FED cuts. Besides, the Asian region shows signs of recovery earlier led by China.

#5 rank goes to the British pound as it lost its former third position this year. The gloomy COVID prospects in the Kingdom and Brexit uncertainty put the pound on the "roller coaster" this year as it dropped huge at the start of the year and now recovers just above the breakeven against the dollar.

#6 is the Canadian dollar this time. It lost four positions compared to the last year. CAD resembles the down and up moves of the British pound, but the reason is different. It just followed the crude oil price, which crashed in the first half of the year and now is leaking wounds as it is still in the red with a -21% loss year-to-date.

And the top loser this year is the King currency U.S. dollar with #7 rank. It is not a surprise if you follow me on the Blog. I see further weakness to a multi-year low of 87-88 in the U.S. dollar index. The U.S. economic recovery is slowing while other leading economies gain traction. This hammers the King's currency. Moreover, the FED cuts narrowed the interest rate gap with peer economies, and the U.S. dollar's attractiveness is fading.

Let's see what the next year will bring us.

Thank you very much for your warm regular feedback and strong support this year.