As you know, if you've been visiting here over the past year, we've had a ton of fun looking at how some of the biggest financial powerhouses are approaching cryptocurrency and blockchain investing.

Most recently, investment banking behemoth Goldman Sachs said that Bitcoin (BTC) was likely headed to $100K and above in 2022. When I used a similar calculus to what they did, my numbers were even higher.

We also looked at the bombshell crypto report from Bank of America that said in no uncertain terms that crypto was "too large to ignore." And we also did a deep dive into what consultancy giant Deloitte found when it asked businesses how they felt about the crypto and blockchain space. And the bottom line from that report was that if you're in business and you ignore crypto, you do so at your own peril.

Now, banking giant Wells Fargo has thrown their hat in the ring with what they think about the future of cryptocurrency for investors. And I think you'll be as surprised as I was when I looked under the hood of the report.

So, let's get down to business!

It’s Early But Not Too Early For Crypto

Wells Fargo's crypto report Cryptocurrencies – Too early or too late? does a deep dive into answering two questions about crypto: Is it too late to invest in crypto? Or is it too early to invest in crypto? And as the backdrop for their arguments, they looked at technology adoption rates.

Is it too late to invest in crypto? According to Wells, Bitcoin has compounded at an annual rate of 216% since its inception in 2010. Meanwhile, the S&P 500 has compounded 16% annually over the same period. 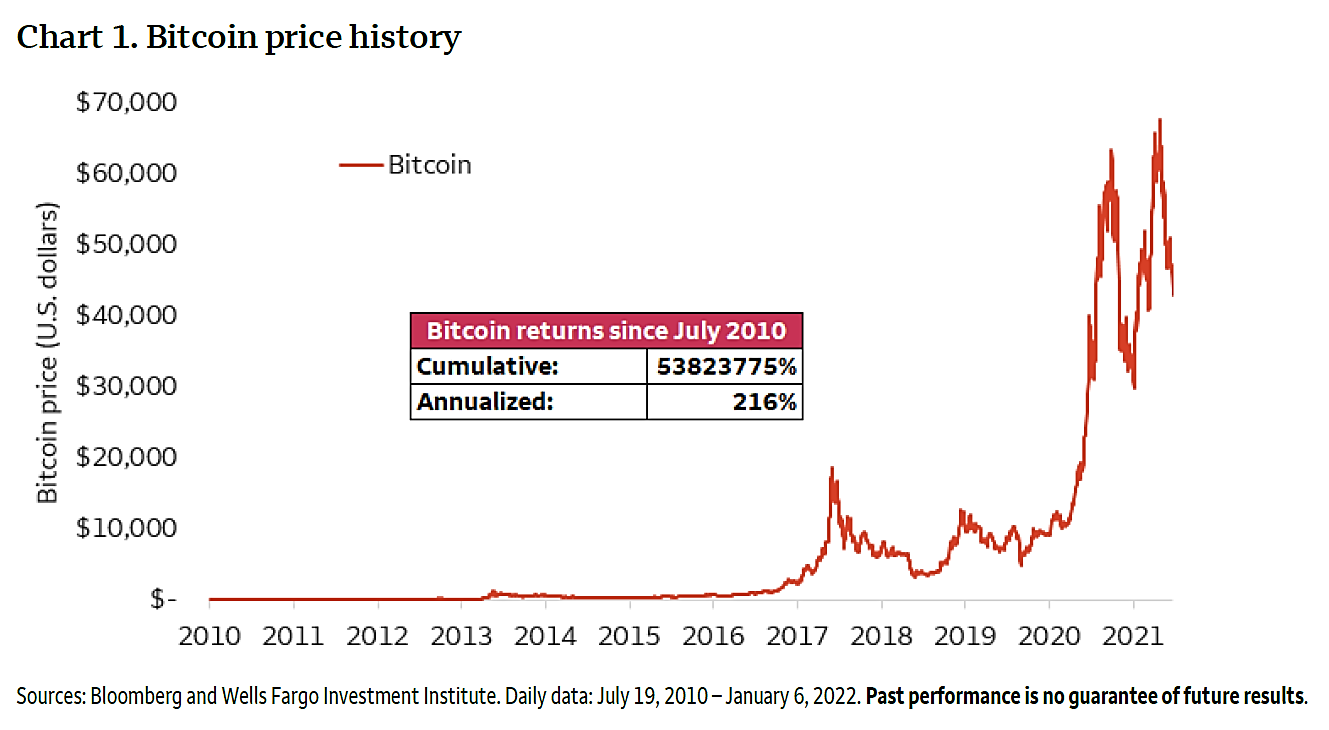 But that doesn't mean it's too late to invest in crypto. In fact, it's not unlikely that new investments make parabolic moves early on as speculators and investors fight it out. Over time the non-believers are shaken out, and prices normalize.

In addition, the crypto investment space is still very young. And that's going to promote more volatility as investors figure out which players are going to make it and which aren't.

Another factor is that crypto – unlike other assets – is more difficult to understand than many other investments. All told, this means even more volatility. According to Wells:

We understand the “too late to invest” argument but do not subscribe to it. We believe that focusing to much on past performance, especially with cryptocurrencies, can be misleading to new investors.

Ok, so if it's not too late, is it too early to invest in crypto? Not according to the report. It's early, but not too early.

Like a ton of other technologies, it takes time for consumers to get their heads around what a technology is, what it does, and how it can have real value. Adoption rates can be slow in the beginning. In fact, some adoption rates can take decades between the initial introduction of a new technology and when it becomes widely used. Take a look: 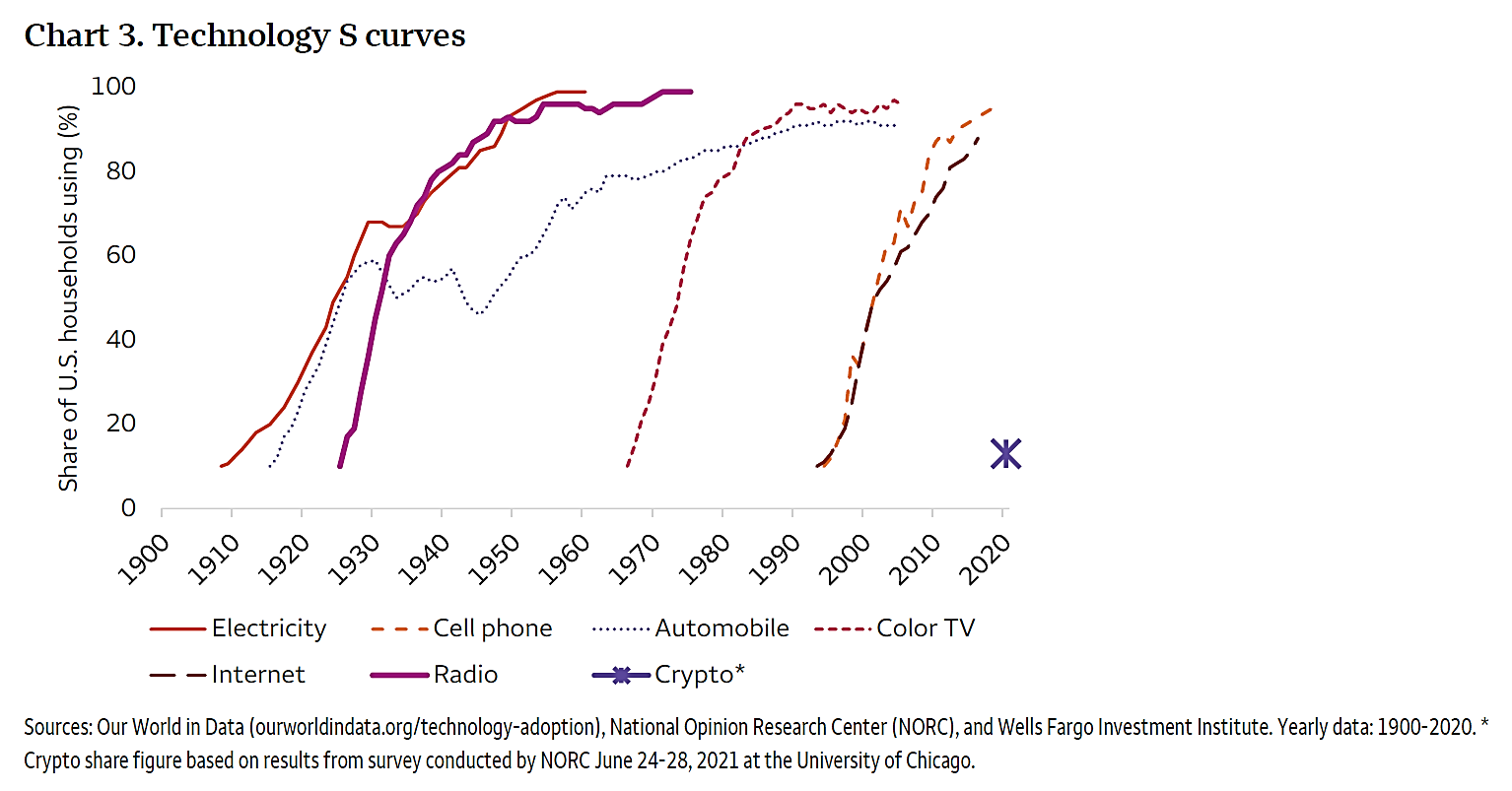 As you can see from this chart, adoption of various technologies takes time. That rate of adoption is called an "S Curve." And that means that early adoption of a technology is slow. After that, adoption can be followed by a steep curve and inflection point when adoption is rapid. Finally, a technology reaches maximum adoption, and the S curve flattens.

The chart also shows that in the early going, some technologies, like electricity, for example, take longer to get into the mix. And that's indicated by a flatter S curve. Meanwhile, other technologies, like cell phones and the internet, have very steep S curves. And that means that the early adoption is rapid, followed by a faster maximum adoption rate.

Right now, it looks like crypto is following a similar adoption rate to the rate of the internet. And that's likely to translate to a steep S curve for crypto adoption and a rapid rise to a maximum adoption rate.

Cryptocurrency adoption rates look to be following the path of other earlier advanced technologies, particularly the internet. If this trend continues, cryptocurrencies could soon exit the early adoption phase and enter an inflection point of hyper-adoption, similar to other technologies.

And if you dig into the report, you find Wells' logic to be pretty solid behind why crypto and internet adoption scenarios are so much alike.

First off, early adoption of the internet, like crypto, was awkward, clunky, and not very user-friendly. Remember the early stages of web browsing in the 1990s? Not exactly the most satisfying or productive experience.

Second, like the early internet, consumers and businesses are trying to figure out the best use cases for crypto and blockchain. At first, the internet was certainly a cool thing to play around with, but it took years for most of us to figure out what it could really do. When that inflection point happened, it was off to the races.

Third, there's a good case that adoption rates for crypto will likely outpace other technologies, like electricity and cars, and perhaps even the internet itself. And that's because new digital innovations can build on innovations of prior technologies. In the end, that means a higher adoption rate and a steeper S curve.

Another important consideration is that internet adoption, once it hit its inflection point in the mid-to-late 1990s, rose at a faster rate than the other advanced technologies.

And like I've said here before, Wells also points out that regulatory structure will make investing in crypto assets less scary for just about every investor. And that translates to even wider adoption.