It is time to update the crypto charts as I spotted one strong alert in a major coin for you.

Let me start with the charts showing the balance of power in the crypto-sphere. The two majors will be first. 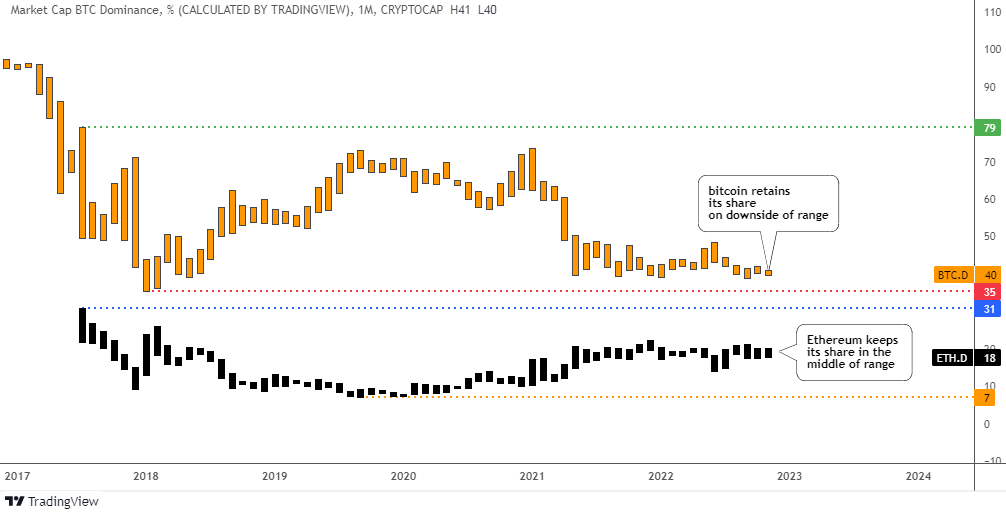 In spite of the so-called “crypto-winter” in the market, these two mastodons have kept their stranglehold on both individual and combined market share.

Bitcoin’s market share (orange bars) remains stable at 40% of the market no matter what. However, it is located on the downside of the range as other coins have taken their place in the sun. The all-time low was recorded at 35% in distant 2018.

Ethereum’s dominance (black bars) is also solid at 18%. It saw a high market share of 31% at the beginning of its life. Currently, it is exactly in the middle of the range. It's worth noting that moving to a new proof-of-stake (PoS) mechanism didn't add power to the second largest coin so far.

The combined market dominance is solid, hovering around 60%.

Let us move on to the rest of the top ten list excluding stable coins.

Binance's native cryptocurrency (BNB, green line) hit the charts as it rose to #4 spot despite not being a crypto-coin in a traditional sense since it is used as a "fuel" for exchange transactions. Its market dominance of 6.3% stands at the highest close reading ever. The rise of Binance's exchange and the activity of its traders are driving the demand for this coin, which is beyond the reach of the remaining cohort.

Ripple (XRP, black line) had its best year ever with a market share of 18% in 2018. Since this coin is backed by banks, its fame evaporated quickly. Its dominance dropped like a rock to the valley of 1% at the end of 2020. The current rise to 2.6% looks like a dead-cat bounce.

Last month, Dogecoin (DOGE, orange line), the meme-currency, was ranked #8 captivating the news radar after scoring more than one hundred percent in less than a week amid Twitter's (TWTR) takeover. The coin was pumped and then dumped back down to 7 cents from a peak of 15 cents. However, the recent tweet of David Gokhshtein, “I feel that we’ll all see Vitalik and Elon working together to somehow upgrade $DOGE” has turned the tables again as the new pump of Dogecoin is underway with price soaring above 10 cents. The market share is at 1.7%.

Cardano (ADA, blue line) had a promising future, however, the high of 4.5% last summer was the best market share level ever and the current dominance of 1.4% shows the fading popularity.

Polygon (MATIC, purple line) takes the share of “falling angels” and prominent Ethereum killers that turned to zombies now. Its market share reached the all-time high of 1.2% this month.

Now, let’s get down to the alert spotted on the Bitcoin weekly chart below. 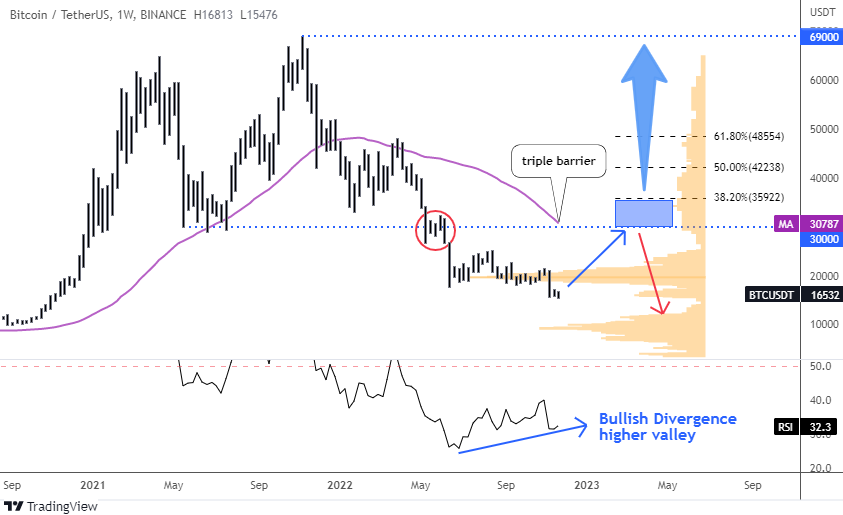 You were ultra-bearish on the main coin all the way down since I called for the “Crypto Apocalypse” this May. Your latest largest bet was to see Bitcoin collapsing to $10k, the next volume profile support on the chart. The lowest valley was recorded this month around $15.5k.

However, our trusted assistant the RSI indicator didn’t update the valley. On the contrary, it has established a higher valley, which is clearly visible on the sub-chart. This could pump the Bitcoin price anytime soon.

How high could it jump? I mapped possible scenarios on the chart above to answer this question.

At $30k, the price would almost double to reach the triple barrier (blue dotted line). It is composed of the purple moving average, the valleys of Y2021, and the consolidation area prior to the further drop to $20k (red circle). The bounce could extend further upside to hit the blue box a 38.2% Fibonacci retracement level at $36k.

It is still too early to consider a total reversal to the upside, so we could assume that the price could drop again after this projected bounce.

Assuming an optimistic scenario, at least $69K will be retested. We may be able to determine the premises in future updates since it won't happen in one day.