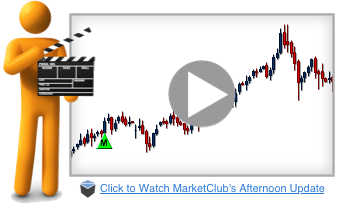 Hello traders everywhere!  Adam Hewison here, co-founder of MarketClub with your 1 p.m. market update for Thursday, the 28th of July.

Let us not overlook the the importance of the dramatic fall in equity prices yesterday.  We do not believe that it was a one day event.  Certainly a move of over 2% in one day to the downside cannot be seen as a positive in anyone's book.

I could go on and on about the debt ceiling crisis or the lack of resolve, but it seems pointless.  I think the market is just going to generally roll over to the downside.  I do not see any strong rally today.  I think even when they come out with a resolution it's going to be viewed as negative and not enough and we will see the market once again be on the defensive.

The pressure on Silver and Gold earlier today is the first sign of profit taking that we have seen.  However, both markets remain in an upward trend.  Crude Oil continues to be trapped in the broad trading range that we discussed in previous broadcasts.

Let's go to the Markets!

END_OF_DOCUMENT_TOKEN_TO_BE_REPLACED

Hello traders everywhere! Adam Hewison here, co-founder of MarketClub with your 1 p.m. market update for Wednesday, the 27th of July.

It really upsets me when we export US jobs overseas. Case in point: General Electric just shipped a ton of jobs out of Wisconsin to China. I can understand some things, but the person who is in charge of creating jobs for the President of the United States is Jeffrey Immelt, who just so happens to be the president of General Electric. So here we have someone who is “The Official Job Creating Czar" shipping good American jobs overseas to China. Does that make any sense to anyone? Oh, and I might also point out that General Electric paid zero taxes in the U.S. last year.

How much did you pay in taxes?

How are the markets reacting with just 2 days left before the end of the month? The equity markets are remarkably flat so far for July. It's a different story for Gold and Silver which had the biggest gains last month with a 9% move up in Silver, and a positive gain over 7% for Gold. Crude Oil was up 2.47% in July, which closely mirrored the Reuters/Jefferies CRB Commodity Index which managed to move up 2.67%

Let's go right to the markets!

END_OF_DOCUMENT_TOKEN_TO_BE_REPLACED

Hello traders everywhere!  Adam Hewison here, co-founder of MarketClub with your 1 p.m. market update for Tuesday, the 26th of July.

Just when you thought it couldn't get any more bizarre... The markets are now totally perplexed at the direction Washington has taken and the lack of any decisive action.

I'm not sure if you watched the presidential address and the Republican rebuttal last night, but what an example of two houses divided!  It was painfully evident that each man was just playing to their political bases.  Pure Kabuki theater.

I always enjoy a good comedy, but this D.C. comedy has gone beyond a joke and is no laughing matter.  It's turning into a tragedy not just for the American economy, but also for America's mystique overseas.  How these two parties can honestly look themselves in the mirror and say they're doing the right thing for the country is beyond anyone's belief.

One of my technology heroes is Steve Jobs, the leader of Apple.  Steve coined the phrase "reality distortion field" (RDF).  It was Steve's ability to convince himself and others to believe almost anything with a mix of superficial charm, charisma, bravado, hyperbole, marketing, appeasement, and persistence.  Unfortunately, neither the President nor the speaker of the house, John Boehner could pull off a reality distortion field last night.  Too bad for both of them, and too bad for the country.

So without further ado let's get off this rant and go right to the markets!

END_OF_DOCUMENT_TOKEN_TO_BE_REPLACED

Hello traders everywhere!  Adam Hewison here, co-founder of MarketClub with your 1 p.m. market update for Monday, the 25th of July.

Well, here we are again with no end in the debt ceiling problem.  I think the markets are just waiting to get this thing resolved one way or another.

When this problem was not resolved over the weekend, the Gold market acted in dramatic fashion and jumped to $1,624 in the Asia.  Not exactly a resounding vote of confidence for the US markets or the government.

This is a "flip a coin" type market where whatever comes out of Washington will have an effect on markets.  However having said that, we may be coming to an area in the S&P where we are going to have natural technical problems.  The S&P 500, in my humble opinion, needs to move over the highs around the 1370 level to really get going on the upside.  I am not so sure that's going to happen.  Let's see how the market performs today and how Gold and Silver close.

Now, let's go to the markets and see how we can protect and grow your money in 2011.

END_OF_DOCUMENT_TOKEN_TO_BE_REPLACED

Hello fellow traders everywhere. Adam Hewison here co-founder of MarketClub with your weekend trading update for the week ending on 7/22/11.

Out of the six markets we track every trading day, five markets were in positive territory for the week. The only market that did not end up in the plus column was the dollar index which fell 1.19%.

The percentage winner for the week was crude oil which moved up 2.32% and is on the verge of breaking out on the upside. The markets continue to wait and wonder as to what is going to happen with the debt ceiling talks.

It would seem like neither the democrats or the republicans give a hoot about the country, all they seem to be interested in is political gamesmanship and preserving their own power. We are as of today's taping no closer to getting a debt ceiling deal in place than we were a week ago. UGH!!!

Europe is still in a quandary even though the politicians are trying to save face and save the no win situation in Greece. Imagine the first bailout to Greece didn't work, so now we are going to loan Greece even more money to pay back. Does that make any sense to anyone?