Hello MarketClub members everywhere. The back and forth between the two presidential nominees is quite extraordinary, and I believe it is reflecting its uniqueness on the market itself. No one quite knows what to expect or what the outcome is going to be. Some polls show Hillary in the lead and others show Trump leading. Then we have this whole FBI and Homeland Security looking into protecting the integrity of the voting system - I never thought I'd see this in my lifetime, but we are living through an extraordinary time in history. 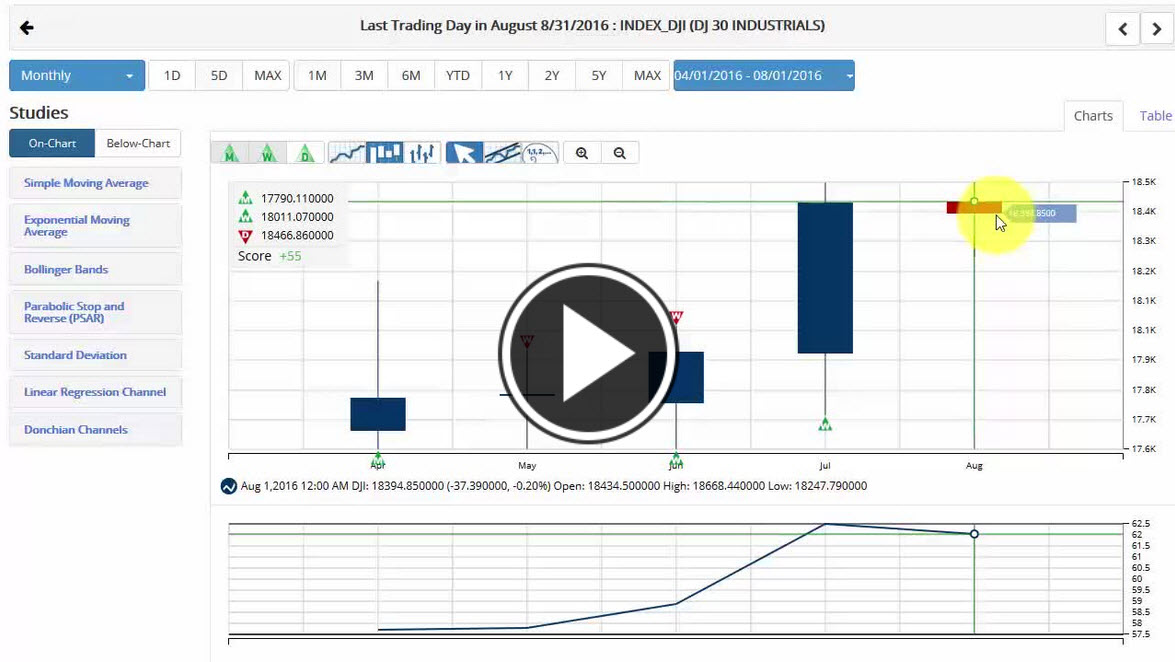 Having said all that, let's take a look at the markets and what they are doing.

Today is the last trading day in August. It is also "Hump Day" and the middle of the trading week. I always like to look at the end of the month as a reassessment period as to where the market is closing in reference to last month's close. I will be doing that in today's video. END_OF_DOCUMENT_TOKEN_TO_BE_REPLACED

Hello MarketClub members everywhere. World bankers met at their August retreat this past weekend in Jackson Hole Wyoming and I am convinced that this is just party time for the bankers and a waste of money as nothing was resolved. There is a reason why nothing was resolved at this meeting and that is because the Fed headed by Janet Yellen has no clue about what to do with the U.S. economy. I have been harping on this for the past several years and believe the Fed is up the creek without a paddle and clueless about what to do. All this after printing trillions of dollars. Remember Helicopter Ben throwing money everywhere? That is Ben Bernanke the former head of the FED; his thesis was to do everything the opposite of the great depression when money was tight. Looks like it didn't work out too well for you Ben. 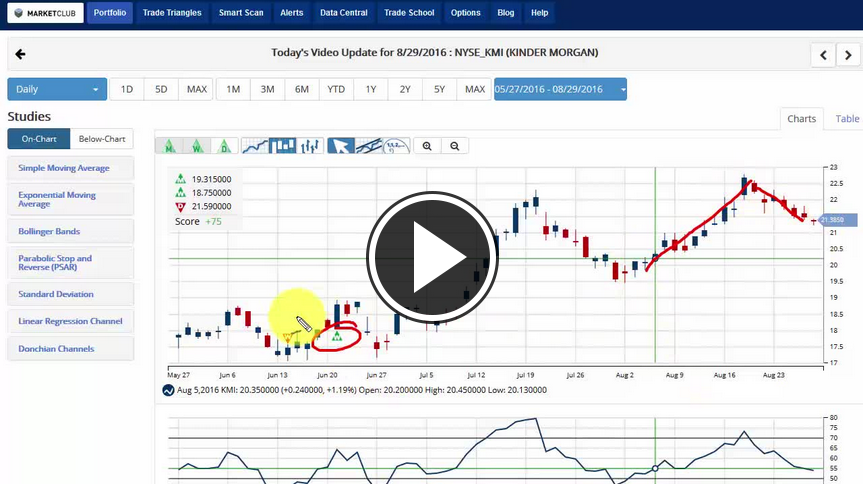 The only way I can see the Fed making its way out of this remarkable self-made disaster is by inflating the economy. That would take the onus off them and help stimulate businesses and production.

Is that likely to happen? At this point, your guess is as good as mine. As I stated earlier, the Fed is like a deer in the headlights and their actions are frozen in time. Plus, the FED is all out of options.

Let's begin today by looking at the major indices and where they are currently trading. END_OF_DOCUMENT_TOKEN_TO_BE_REPLACED

Hello MarketClub members everywhere. It's Friday and the big winner for the week is Crude Oil which is up 8.34% for the week and in turn my recommendation to buy Kinder Morgan Inc. (NYSE:KMI). 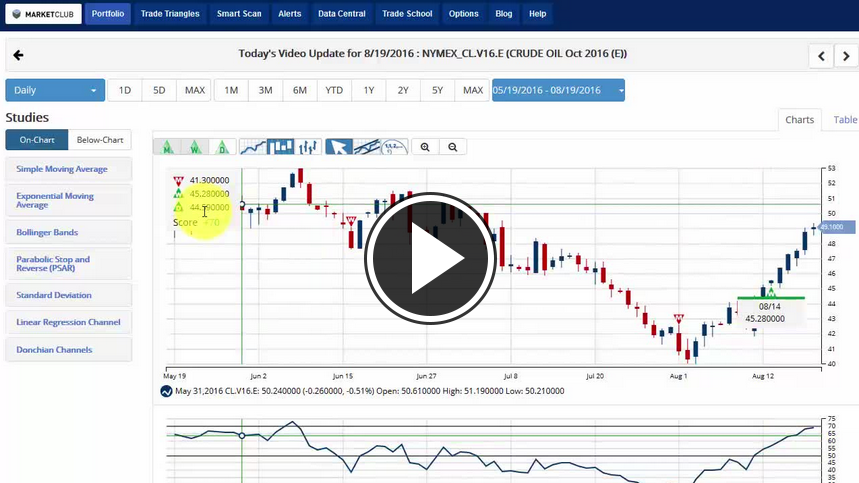 Looking at the major indices here are the changes so far this week (Thursday Closes): END_OF_DOCUMENT_TOKEN_TO_BE_REPLACED

Hello MarketClub members everywhere. As we plod through the dog days of summer and the oppressive heat that we have been experiencing along the Atlantic seaboard, we have to remember that there's an end in sight. What I mean by that is Labor Day is rapidly approaching and it signals to all the traders out there that summer is over and it's time to get back to work and making money in the marketplace. 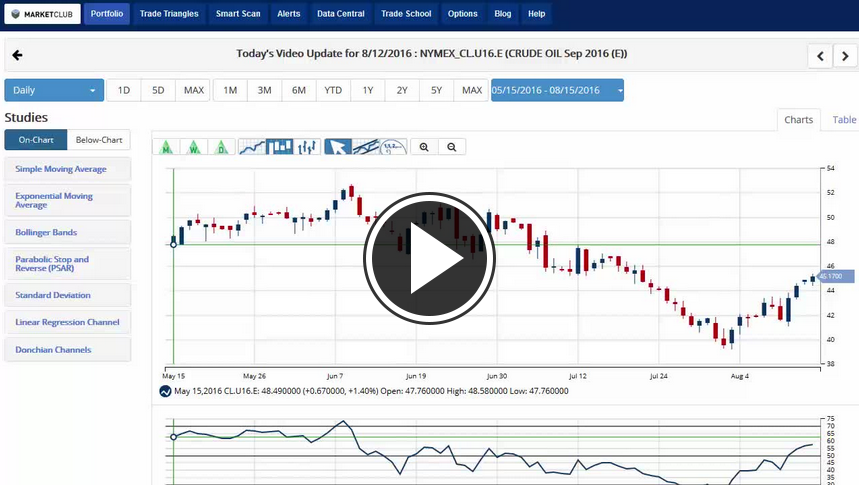 It is amazing how attitudes change or become reinforced after Labor Day.

In addition to Labor Day, this is the final week of the Olympic distraction, if that was not enough we will also soon be getting bombarded by political messages for the general election on November 8th.

So what's a trader to do? Here are 5 suggestions to keep you on the right track in 2016. END_OF_DOCUMENT_TOKEN_TO_BE_REPLACED

Hello MarketClub members everywhere. It has been quite a week with gold, stocks and oil all moving in the same direction and that is higher. I have said this before; it is sometimes best to just to go with the flow and not try to overthink or inject what you may feel fundamentally about the market. 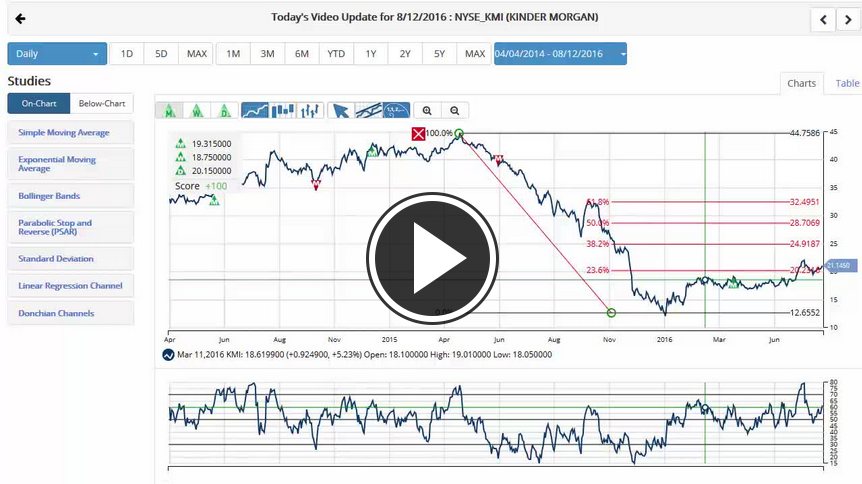 I thought I would do something a little different this week by including some questions from the MarketClub members blog. END_OF_DOCUMENT_TOKEN_TO_BE_REPLACED