Today I'd like to welcome back Mark McRae from SureFireTradingChallenge.com. I personally have known Mark for over three years, with Adam knowing Mark well over 5, and Adam and I both agree that Mark is truly an innovator and one of the hardest working traders we know. His latest project, SureFireTradingChallenge.com, kept him holed up with charts and traders from all around the world to find some of the best methods in the world for trading. Check it out here.

Now his blog post today is more applicable now then it ever has been...support and resistance! Let me let Mark teach you a bit more:

I have found a double use for my method of identifying these points - They are also Swing Points!

You may think you know where Support and Resistance is, but do you really?

How do you know where support and resistance really is?

The problem with Support and Resistance (S&R) is that it is not a definite number. It is not an exact point on the chart at which price will, without any hesitation stop.

In fact S&R is actually an area - it is not an exact number as we would all like to think.

Try telling your broker that you want a stop loss at somewhere between 50 and 55 and watch him burst a blood vessel.

This is what I want to concentrate on in this lesson. This is a technique I have found to be particularly good at not only identifying strong S&R points but also swing points.

In order to find S&R we must first identify market swing points. There are various ways of doing this but I am going to use the one I have used for years.

For the purpose of swing points we are not interested in the open or close of the bars only the high and low.

This can be particularly useful if the market is trading sideways and you are trying to determine the breakout point. There may be many peaks and valleys but for me there is only one real point - that is the most recent swing up or swing down.

Look at the next diagram

You can see that although there were a few highs and lows that you could have taken as support or resistance, but it wasn't until bar (M) that a definite swing point had been identified and you could mark bar (K) with an (S).

To work out the swing down point - take any bar on a chart and think of that bar as your start point - bar (S). If the next two consecutive bars make lower lows than the previous bar then that is a swing down e.g. bar (1) has a lower low than bar (S) and bar (2) has a lower low then bar (1). If there are not two consecutive lower lows then it is not a swing point and you move to the next bar.

Just as in the example above you can see exactly the same thing with the swing down. Even though price made a few highs and lows it wasn't until bar (M) that you could mark bar (K) as the (S) point.

Only once we have clearly marker swing points can we go on to identify our support and resistance points.

Marking the support and resistance points using this method of first identifying the swing points will give you definite points on a chart from which to calculate your stops, limits and projections.

Please take some time to visit Mark and see his new project: SureFireTradingChallenge.com.

Today I'd like to welcome back Gary from Biiwii.com. I've asked Gary to teach us a bit on divergence.

I want to have a look at divergence by the lower panel indicators and the valuable clues they can provide when used in conjunction with price activity, support/resistance levels and of course fundamentals of a given stock, commodity or other asset.

Divergence can be used to help define bullish or bearish setups. With my M.O. as a 'bottom feeder', today I will focus on a chart that sports most of the components I like to see when setting up for a swing trade; it is the etf UNG (the United States Natural Gas Fund) which has been declining relentlessly from a manic high in June and mercilessly punishing anyone innocent enough to buy into this mini-bubble under the incorrect assumption that it was 'commodities to da moon'. But as "what goes up comes down" so too does the reverse eventually assert itself. 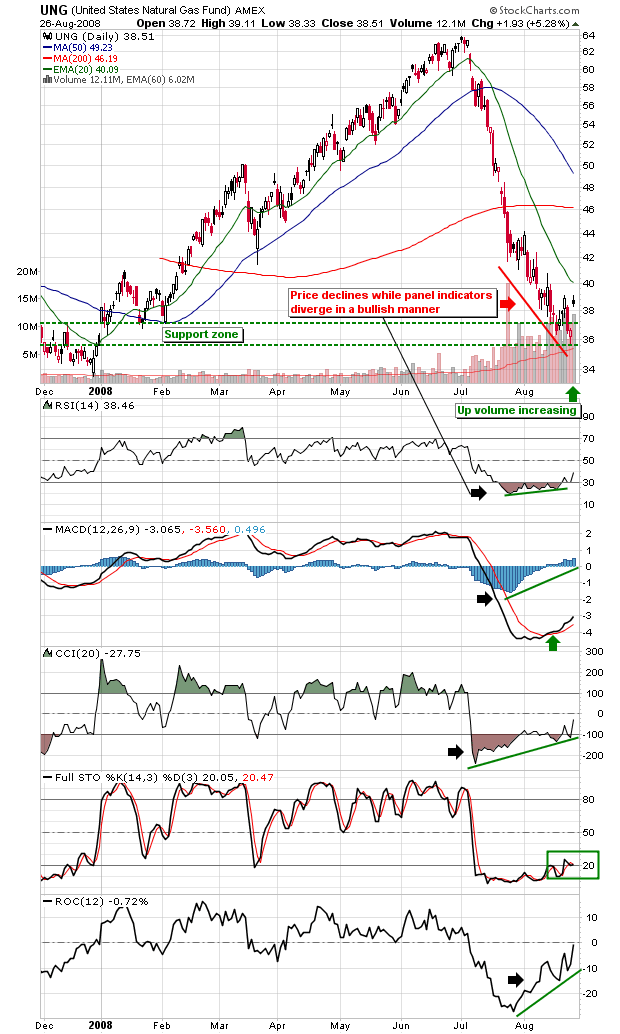 In looking at NatGas, I like the fundamentals much better from a seasonality and value perspective (thanks to a 40% decline) if only for a swing trade into the fall or winter. Fundamentals are the first priority. Check. Next, the decline has brought the price down to a notable area of lateral support. A decline like this is simply not going to be arrested until support can be defined. Check, we are at noticeable support.

Finally, what I like to see in a bottom feed is relentless and and dispiriting price action down to said support with bullish divergence by the indicators. We have that in spades with RSI, MACD, CCI and Rate of Change all nicely divergent even as bubble participants give up the ship (fresh lows in price). Right at support. I have included the full Stochcastics which have also diverged but more importantly are on the verge of 'triggering' above 20. That would be another important cross reference to a bullish case.

So there you have it. A simple bottom feed amid terrible price action down to support and bullish divergence. Nothing but NOTHING in this market is 100% and it is all about risk vs. reward. This trade in my opinion has a good risk profile. The risk is certainly better for Natty than back in July, wouldn't you say? I have my own money in this trade and speaking of risk, if the noted support fails so too will the trade and I will book a loss. It won't be the first time. But the key is to always understand your risk profiles and control same.

Edit (10:00) At the time this post was written (pre-market 8/27/08) I was expecting UNG and NatGas to continue hammering out a painful bottom (those are the best kind for sustainability). But during normal market hours we appear to be getting quite excited and gappy. If UNG registers a manic over bought condition directly off of the low I am going to sell it. Please use the above as a chart study on indicator divergence only.