The less you watch, the more you see the whole picture. The last time I posted a Silver update was three months ago, and nothing much has happened in the market, but the attitude has changed with a fresh look. Let's take a look at the details on the chart below. 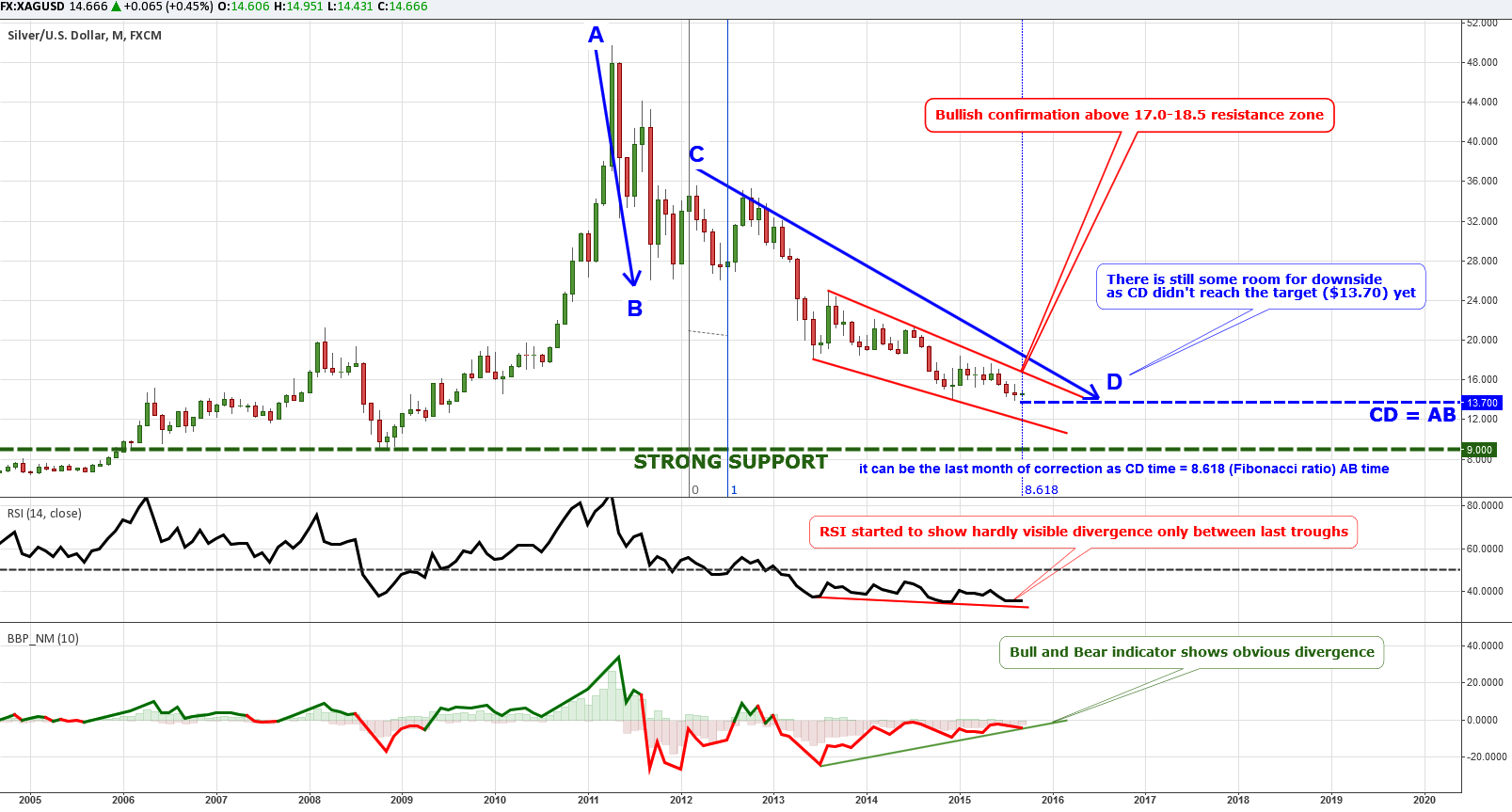 In my last Silver update, I had said that in the current downtrend it was preferable to take short positions with good protective stops just above resistance and the range had been defined within the $15-18.5 margins. Indeed, the price had broken below the $15 support level and dipped lower, testing the December 2014 low at the $14 level which would open the door to interim support at $12 level. This attack was repelled in the previous month and the market closed almost in between the $14-15 level at $14.60.

According to my AB/CD concept, I measured the distance of the first decline that started in April of 2011 down to the September 2011 low (blue AB segment) and then have subtracted it from the beginning of the new downfall that started in February of 2012. The target of the CD segment, which is equal to the AB segment is at the $13.70 level, which just one dollar from the current price of $14.67.

But what has changed from the last update? I clarified the target for the ongoing correction. The close distance to the target coincides with the signals coming from indicators that I put beneath the price chart. I think that we are close to the exhaustion of the downtrend. The RSI indicator shows a hardly visible bullish divergence: the price has made a new low at the $14.96 level, but the RSI didn’t and this is the first worrisome signal for bears.

For the first time, I added an experimental bull and bear indicator (BB). Its graph looks similar to the RSI indicator, but it shows one interesting difference between them. The RSI has started to show divergence over the last few months, in the meantime the BB indicator has clearly signaled the divergence last December. Another useful observation is the distance to the reversal zone. Unlike the RSI, the BB indicator’s signal line has been approaching the reversal level at 0 which tells us about the soonest (monthly charts) change of the trend from bearish to bullish on the breakout. The RSI is still too far from the 50 swap level.

So another tick down to the $13.70 level is expected and it could happen this month. For the first time, I used another interesting instrument with the Fibonacci ratio – Fibonacci time zone extension (vertical lines). The use of it is to identify the time period of price action. I have measured the AB segment period and then have cloned it to the right starting from the C point. The current month is sitting exactly at the 8.618 Fibonacci ratio; it's amazing for two reasons:

1) The Fibonacci ratio is right on this month, so we can expect a trend reversal in September.

2) The much longer CD segment period is compared to the AB segment period – it's 8.618 times longer, but the outcome on the contrary, is smaller. We still haven’t reached the target thanks to market indecision.

At the end we have four figures to watch:

2) The $12 level – the falling wedge pattern’s downside (highlighted in red).

2 thoughts on “Silver Update: The Time Has Come”