The Energy Information Administration (EIA) published its Short-Term Energy Outlook (STEO) for January, and for the first time provided its projections for 2018. After all of the hype about the OPEC production cut, it may come as a surprise that the EIA is projecting a rise in global oil inventories in 2017 and 2018.

The rise in U.S. output is largely expected from the Gulf of Mexico. The EIA has yet to forecast much of a supply response from American shale oil. But I think we may have already seen the start of a response. The EIA reported the production from the “Lower-48” (excluding Alaska and the Gulf of Mexico (offshore) rose by over 100,000 b/d in October. (The more accurate, survey data of production lags by a few months.) This was the first meaningful rise in this data since production had peaked. 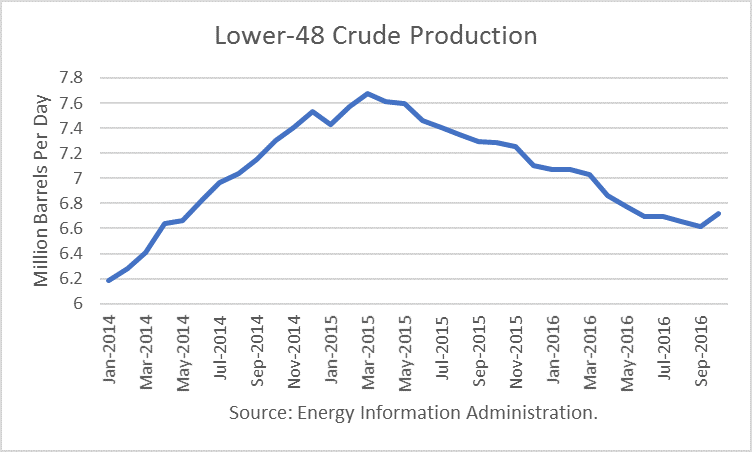 The rise was mainly due to an increase of 72,000 b/d in North Dakota. Continental Resources (CLR) is the largest producer in the Bakken basin and reported to investors that it had added two crews to complete “Drilled But Uncompleted” wells (DUCs). It also said that it would be doubling its completion crews by end-2016. Furthermore, it said it had built-up its DUCs inventory to 195 wells, and that did not include 15 well that had been completed and would start pumping in 2017. This is concrete evidence that American shale production is responding to higher crude prices.

OPEC has managed to get the market excited about its production cuts. But a more detailed analysis shows that the oil glut may still grow through 2018. There are many uncertainties on the supply side, but the vast majority of them are unsupportive for oil prices.

One thought on “Global Oil Glut To Build Through 2018, EIA Says”