The U.S. dollar is the primary benchmark for the expense of the time value of the money around the world. It affects all asset classes, and I want to analyze it to see if the speculation about the coming cycle of the rise in interest rates is valid or not.

The wise trader once said; “if you want to know the market trend just squeeze the chart to see the perspective.” I used that advice to focus on the long-term perspective, and in this post, I would like to share the result of my research in the three graphs below.

Chart 1. The Yield Of 10-Year U.S. Treasury Notes Quarterly: Downtrend Could Be Over Soon 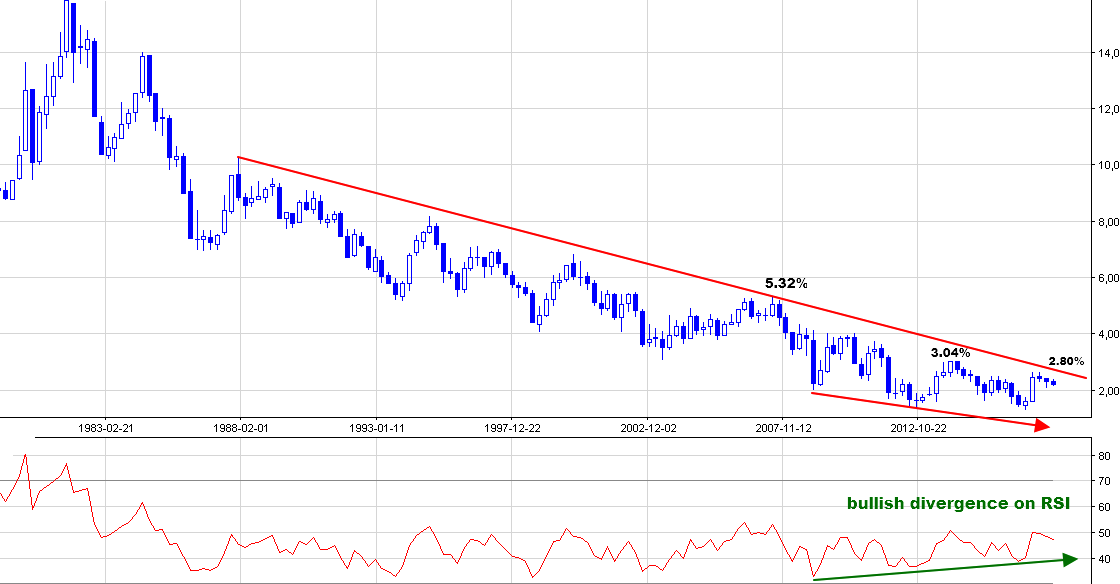 The chart above shows the history of the yield on the 10-Year U.S. Treasury notes (UST) from 1980 to present day. I chose that period to highlight the whole move down of the yield from the top in 1981 at the 15.84%. I chose this instrument as it is a benchmark showing investors’ sentiment about the future interest rates for the U.S. dollar.

We can see how sharp the drop of the yield was during the decade until the late 80’s when the rate lost half of its value down to 7% within a large zigzag. Another period of the lowering yield had started after a good correction in the area of 10% in October 1987.

I added the red resistance line right from that time and put it through the peak of June 2007 at 5.32%. It covered 30 years of the falling yield. And this resistance could be broken soon as even the longest day has an end.

I added the RSI indicator in the sub-chart to see if it shows any alert. Bullish Divergence was detected as the series of lower lows on the yield graph in 2008-2012-2016 (red down arrow) don’t match with the series of higher troughs on the RSI chart (green upside arrow). The divergence is just an alert, not a signal, but we could see a break of the yield rate to the upside at any time.

The bullish candle of the last quarter of 2016 was powerful, and it broke above the 2015 rate peak. But the red line is still intact, and we need to see growth passing over 2.8% to get the breakout. Now I understand why some large banks comment about the 3% area as the target for future rate growth. As you can see, the next significant resistance is located at the December 2013 peak of 3.04%. I think this would be the area of the real battle between bulls and bears. Let’s see who will win.

The rising yield implies the drop of the price of UST, and in the next chart, I posted an analysis of the futures of the UST on the shorter time frame to see if we have a technical confirmation there for the long-term chart above.

Indeed, the proof is found. The Head & Shoulders reversal pattern (orange) was detected on the chart above. Moreover, we already had a breakdown of the Neckline, which is significant evidence that the pattern is valid.

We’ve seen this pattern before, and the target calculation should be an easy task for you besides I added the critical measurements to the chart for your convenience. We should subtract the height of the Head ($16.08) from the Neckline’s break point ($127.39). The target is at the $111.31 mark.

Currently, the futures have made a corrective pullback, which could bring the price back to the broken Neckline. It is reflected in the first chart as the last three-quarters also show a correction of the yield to the downside after a substantial rise.

The medium-term chart already has signs of the rising yield/falling futures prices. And this is a worrisome alert for the gold bulls. In the next chart, you will see why.

Both UST and the gold are the haven instruments where investors could wait out the market storms. It should be quite natural that these instruments have a good correlation between each other. To show it, I posted the chart above, which covers 10 years of the price history of gold (orange, right axis) and the UST (black, left axis).

I didn’t add an annotation here as the picture speaks for itself. At least for the past decade, we’ve had a strong correlation between the metal and the notes. Gold has a smoother line. We can also see that in 2014 gold became weaker compared to UST as we have a divergence of the lines, which narrowed only last year when the drop of the notes was harder than that one for gold.

Currently, both instruments are reaching higher and we can’t exclude that gold would catch up with the consolidating notes in the $1500-1600 area. But if the anticipated growth of the yields ( a drop of the notes) will continue after this consolidation, hard times for the gold can’t be ruled out.