Together, these trends have reduced U.S. inventories by 40 million barrels since the week ending September 8th. Global OECD stocks have dropped about 51 million barrels from May through September, though this is largely due to normal seasonal trends.

One major factor holding prices down had been the U.S. oil industry response to higher oil prices early in the year. But production trends have slowed, and the oil-directed rig count has dropped 31 in the U.S. since early August to 737. More importantly, it is 147 below the linear uptrend. The implication is that U.S. production growth poses less of a downside risk to prices. 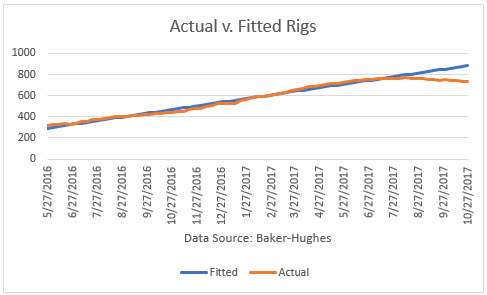 Recent data from the Commodity Futures Trading Commission (CFTC) in its Commitments of Traders (COT) reports show that oil producers have reduced their hedge sizes as prices moved higher, rather than increase them. The lack of hedge selling has enabled prices to move higher. In addition, speculative long positions have been increasing, reflecting a greater confidence by traders that prices will go higher. And speculative short positions remain relatively high, creating the possibility for much more short-covering (buying) by this group to limit their losses.

Following the Kurdistan region’s referendum for independence, which Baghdad does not recognize, Iraq’s forces seized control of all oil fields in the Kirkuk region from Kurdish forces. The result has been a disruption in oil flows of about 200,000 b/d. The issues involving the Kurds, and their potential effects on oil flows, have yet to be resolved.

President Trump decertified Iran’s compliance with the nuclear power agreement. If a new solution is not found by January, U.S. sanctions may be imposed on Iran. While I do not expect a military conflict to ensue, I believe that the issue is adding a risk premium to oil prices.

When the King of Saudi Arabia made the first-ever trip to Russia by a Saudi king, President Vladimir Putin said, “Russia is open to extending a deal with OPEC to curb oil supplies to the end of 2018.” Putin added that he would wait until March, the deal’s current termination, before finalizing Russia’s decision.

Saudi Arabian Crown Prince Mohammed bin Salman said he would “of course” back an extension on the deal beyond March. Saudi officials had not previously stated their intentions, only that all options were open.

Saudi Energy Minister Khalid al-Falih said that the group would consider how to taper the restoration of production once the deal terminates. “When we get closer to that (level) we will decide how we smoothly exit the current arrangement, maybe go to a different arrangement to keep supply and demand closely balanced so we don’t have a return to higher inventories,” he said. 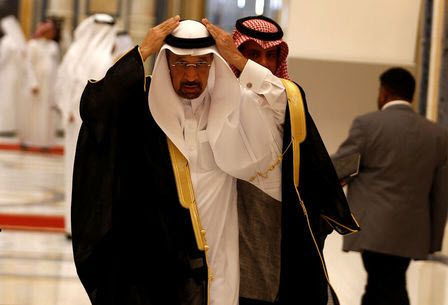 The breakout of oil prices from the trading range, experienced for much of 2017, appears to be justified for now. After the OPEC meeting in late November, the market will face a new test when the seasonal slowdown in demand gets underway, probably enabling global oil stocks to begin building again.

One thought on “Oil Prices Break-Out of Trading Range”