The bulls have been trampling the bears in a near orderly uptrend for the past ~10 straight months now. The bear thesis couldn’t have been more wrong despite the markets facing a trifecta of rising interest rates, an unknown delta variant backdrop, and the Federal Reserve tapering later this year. The major indices are in unprecedented territory breaking through all-time high after all-time in what seems to be a daily occurrence. With Q4 2021 coming into the picture, the S&P 500 is up over 20% and places the market in rarified air.

The S&P 500 index recorded its 53rd record high on September 2nd, which makes 2021 the 5th-ranked year over the past century in terms of record highs, per Bank of America. This significant milestone has been achieved with four months remaining in 2021. The other major indices, such as the Nasdaq and Dow Jones, are showing similar patterns as measured via QQQ and DIA, respectively.

Stocks are overbought and at extreme valuations, as measured by any historical metric (P/E ratio, Shiller P/E ratio, and Buffet Indicator). Valuations are stretched across the board, with the major averages at all-time highs and far away above pre-pandemic highs. 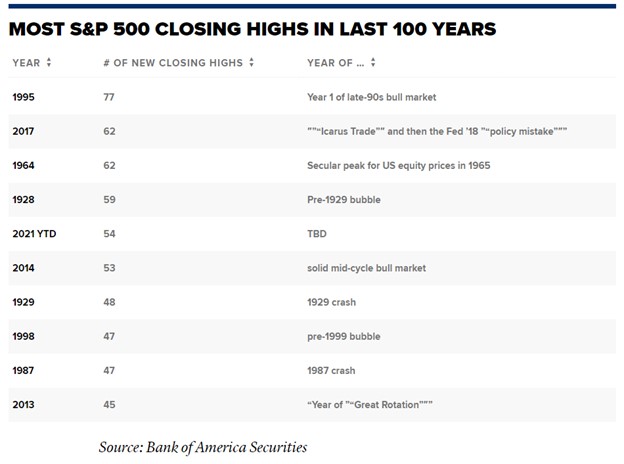 When the Fed Taper and Inflation Hit

As the Consumer Price Index (CPI) continues to push higher in conjunction with better-than-expected employment numbers, the Federal Reserve may be compelled to finally not only entertain the idea of raising rates but implement a rate increase. Although interest rate risk disproportionally impacts fixed-income investments such as bonds and annuities, stocks will undoubtedly be impacted as well. This is especially true for highly leveraged companies such as tech and super-charged growth companies. Even the prospect of higher rates hit the Nasdaq in March for a sharp decline, albeit that decline was quickly erased. This is a case in point of how quickly the markets can turn negative with the hint of rising rates which may be exacerbated in an already very frothy market.

Federal Reserve Chairman Jerome Powell indicated that the central bank is likely to begin withdrawing some of its stimulatory monetary policies before the end of 2021. However, the Chairman did note that he still sees interest rate hikes off in the distance. In the Fed’s annual Jackson Hole, Wyoming, symposium, Powell said the economy has reached a point where it no longer needs as much monetary policy support.

Thus, the Fed will likely begin cutting the amount of bonds it buys each month before the end of the year, so long as economic progress continues. Based on statements from other central bank officials, a tapering announcement could come as soon as the Fed’s Sept. 21-22 meeting. Despite this pivot, it does necessarily mean rate increases are looming.

This pivot in monetary policy by the Federal Reserve sets the stage for the initial reduction in asset purchases and downstream interest rate hikes. As this pivot unfolds, risk appetite towards equities hangs in the balance. The speed at which rate increases hit the markets will be in part contingent upon inflation, employment, and of course, the pandemic backdrop. Inevitably, rates will rise and likely have a negative impact on equities.

Warrant Buffet coined the indicator, which is the ratio of the total US stock market valuation relative to GDP (Figure 2). The current Buffet Indicator is over 243%, currently, over 95% (3.1 standard deviations) above the historical average, suggesting the market is strongly overvalued (Figure 2). 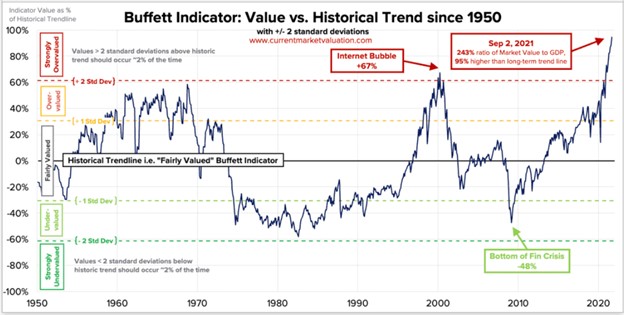 Price-to-Earnings ratios are largely discordant with the economic backdrop and at historically lofty levels. Outside of the tech bubble in 1999/2000 (which set the all-time high at a 44.2 reading), the current Shiller P/E ratio of the S&P 500 composite is the highest on record, exceeding that of the Roaring Twenties by a comfortable margin, currently sitting at over 39.1 (Figure 3).

All the major averages are setting new all-time highs after new all-time highs through the initial week of September. Although various outlets have been beating the overvalued drum, these narratives have been noting but wrong as the markets chug higher and higher. Once the fiscal and monetary stimulus is removed and inflation rears its ugly head, markets will inevitably turn lower. These markets are at frothy levels as assessed by any historical metric. Investors should heed these historical comparators as 2021 continues to appreciate at a blistering pace, already up over 20% year-to-date and leaps and bounds above the pre-pandemic highs.

Tapering is now in the cards between now and the end of 2021. It’s going to be a tug-a-war between inflation, employment, and the delta variant backdrop. CPI reports will become more significant as these readings are used to identify periods of inflation. The recent CPI readings are resulting in a much stronger influence on the Federal Reserve’s monetary policies hence the taper guidance. Investors are speculating on when, not if the Federal Reserve will curtail their stimulative easy monetary as inflation, unemployment, and the overall economy continues to improve. Inevitably, low-interest rates will not be here indefinitely, and bond purchases will need to subside, thus pivoting to a scenario of higher rates in the intermediate-term. As investors grapple with the prospect of downstream rate increases, pockets of vulnerabilities throughout the market will be exposed when rate hikes are deemed on the horizon. As real inflation enters the fray, these frothy markets will come under pressure and possibly derail this raging bull market and introduce some systemic risk in the process. Thus, investors can expect increased volatility as a function of key economic data, specifically the CPI readings.