As seen on the above monthly chart, Platinum spent a pretty quiet season inside of a narrow $100 range, sitting on the 61.8% Fibonacci level around $1200, trading with a discount to Gold. February closed lower at $1185, with the monthly low at $1155 and touched the falling wedge pattern's support. Price couldn't accumulate enough momentum to fulfill the pattern so far. The pattern is bullish and to bring the bullish track the white metal would need to overcome the wedge's resistance at $1500 and two Fibonacci levels at $1203 and $1340 on the way to it, difficult but still a possible task.

I don't rule out that with such an unconvincing performance, the bears would try at another chance to break below the wedge's support at $1150. That will negate the model and the price could quickly reach the last Fibonacci support at the $1034 level. I don't want to be too cruel and imagine what would be next after that. END_OF_DOCUMENT_TOKEN_TO_BE_REPLACED

The gold-silver ratio was in a downtrend for 10 years, falling from the hard-to-imagine 1991 level's high of 100, to the 1998 local low at the 46 level. The ratio then shaped a reversal double bottom pattern and the price started to elevate firmly after it managed to pass the pattern's neckline at the 60 level. Later, the ratio came up to very strong resistance of the downtrend, which kept the price below resistance from six previous bullish attacks. The price tried its 7th attempt, but failed and only at the end of 2001 it managed to break up the trend. The ratio spent another year in consolidation and then rocketed above the 75 level, reaching 1990 and 1996 peaks. 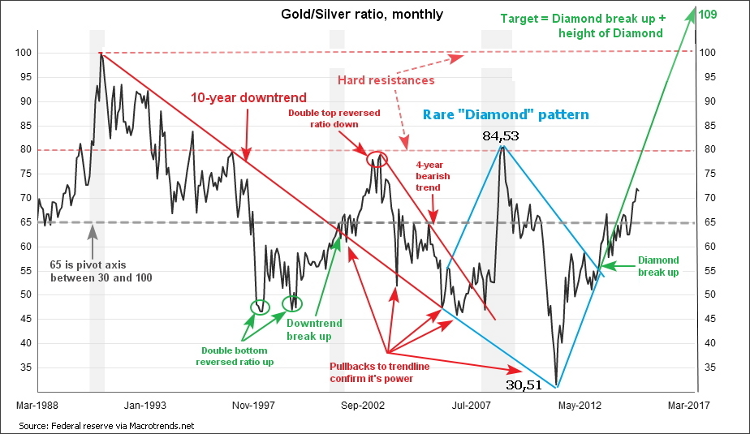 In 2003, the price retraced twice from those highs at the 80 level, drawing a reversal double top pattern. The price quickly crashed like a falling jet and lost an impressive 27 troy ounces, touching the former trendline resistance, now acting as support. Right after that in 2004, the ratio pushed up for a considerable 15 troy ounces, gaining more than half of what was lost in the fall. The price couldn't hold upside and fell into a 4-year medium bearish trend again.

2008 brought the crisis into the world and gold started to be in high demand. It seems like the market forgot about silver during those days, as the ratio charted an almost 90 degree vertical line, soaring like a spaceship. But again and again, the magic 80 level stopped the hysterics and the price softly landed down to the 65 area. The ratio consolidated for two years and in 2010, the price finally broke down with inconceivable acceleration and reached this century's low at the 30 level.

One can notice that the ratio can't hold its gains on both sides of the extremes. Another area worth mentioning is the midpoint between the above mentioned extremes located at the 65 level. We can call it an axis or meridian of the ratio. Price usually holds above or below this level and every time it passes the axis in either direction, the ratio charts small volatility zigzags confirming the power of this meridian.

After the price touched the 30 level low, the bulls entered the market and quickly bought the gold up to 60 level. The ratio then tumbled in consolidation, taking a rest for another shift up to the current 72 level.

Now let's get down to "dessert." I would like you to focus on the "Diamond" pattern, which is drawn in blue to emphasize the rareness of this pattern. Diamond patterns are sculpted by the following price actions: sideways consolidation, extreme development, reverse from extreme, opposite extreme development and again sideways consolidation. All of these market phases happened between 2006 and 2012. "Diamond" is a reversal pattern and the price reversed from this century's low which notably touched the multi-decade downtrend line. The height of the "Diamond" and the breakout point are the most important points of data for target calculation.

In my opinion, the target can be hit if we see substantial worsening of the world economy, then gold demand will outweigh silver. There are two main obstacles, first is the usual peak of effective range at the 80 level, as price usually stalls there. The second is the psychologically important 100 level, as it was last time seen in 1991, or 23 years ago, and our target just above this level.

Any pattern is not a dogma. Once price fails to progress upside, we will enter either sideways consolidation or even a downtrend. Below the current level the following supports are important: first is the meridian at the 65 level and the second is the bottom of the effective range at the 45 level.