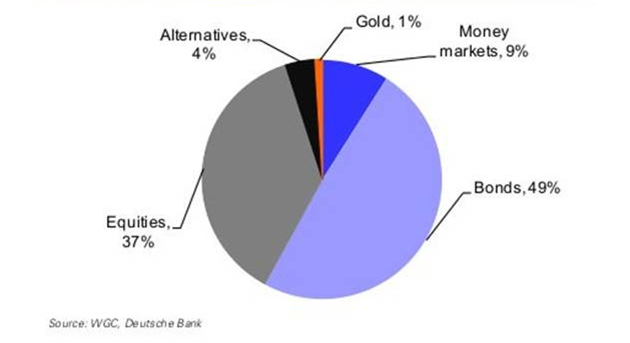 This week George Soros once again came out with his very large directional "bets" for the SP 500 and for gold and, needless to say, Mr. Soros is once again shorting the SP and buying gold and gold miners, joining Ray Dalio, Stanley Druckenmiller and Michael Ballanger (just kidding) in a decidedly unpopular stance. Carl Icahn came out in agreement during a CNBC interview this week that left the interviewer near-speechless and groveling in the mud of anti-Wall Street rhetoric.

In the meantime, some of the smartest investors I know are SOOOO bullish on gold that they are buying huge baskets of penny explorers under a nickel because of the leverage contained when the public finally decides to re-allocate to include gold (and mining stocks). A fund manager I know said to me, "Must be the top!" in reference to this, but it really can't be the top after a five-month rally representing the largest recorded quarterly advance in mining shares since recordkeeping began.

Look at the chart above and think what would happen if we were to get a shift from bonds to gold; 49% of global asset allocations reside in bonds while 1% reside in gold. Now, consider these two facts: END_OF_DOCUMENT_TOKEN_TO_BE_REPLACED

Hello traders everywhere! Adam Hewison here, President of INO.com and Co-creator of MarketClub, with your mid-day market update for Thursday, the 15th of August.

First, Carl Icahn tweeted that Apple shares were "undervalued" and shortly after, George Soros disclosed he was accumulating more shares of Apple, while at the same time dumping his gold ETF shares.

Here we have two Wall Street titans whose average age is 80 years old. You have to love that these two guys are really shaking up the tech world showing traders around the world how it is still possible to trade at their age. Now, I'm sure they don't actually make the trades themselves, but like many traders they have others to pull the trigger. They are both doing a great job and I congratulate them both for showing the world that life begins at 80! END_OF_DOCUMENT_TOKEN_TO_BE_REPLACED

There's no doubt about it, these are crazy times in the market.

My business partner, Dave Maher, came up with the new name for one of the most volatile days in market history ..."Crazy Columbus Day." I think many of us in the industry will always refer to Columbus day with a crazy in front of it.

This is the time to remain cool, calm and collected. Looking back, how did this all happened? It was like a snowball rolling down a hill, gradually building over a period of time and turning into a huge problem. Now that we are sitting in the dust of the crash we ask, who's to blame? It doesn't matter if you're on the Democratic side of the aisle or the Republican side, both parties are to blame for the mess we are in now.

Felix G. Rohatyn, the man who saved New York from financial catastrophe in the '70s, calls them “hydrogen bombs.”

They are all referring to the non-transparent derivatives market. All of these well known financiers figured out the dangers of these toxic financial instruments years ago, yet the Chairman of the Federal Reserve insisted that everything was fine and that the risk in the derivatives market was well spread out.

There was one woman that the CFTC who could have prevented this financial mess. However, this woman left the agency after being verbally beaten down for warning of the possible crisis. Could she have stopped the snowball before it began rolling?

I recently read an article in the New York Times newspaper (online) that I think you'll find fascinating, as I know I did.

Having been a member of several futures exchanges I know that transparency is without a doubt the key to a healthy and vibrant market. The lack of transparency for the past 12-15 years in the derivatives market is nothing short of criminal.

The lack of transparency allowed large banks to make unusually big profits as no one had any idea of what they were actually trading. It all sounded so good on paper. Structured investment vehicles (SIV), collateralized debt obligations (CDOs) all of these looked great in the derivatives modeling world. Unfortunately in the real world, financial modeling does not always work out. And when it comes to big money, the element of greed always comes into play. Greed is something you cannot model into an equation.

Here is the link to the New York Times article I hope you find it interesting, informative and eye-opening.