Precious metals expert Michael Ballanger assesses the gold-silver ratio and its ramifications for the market.

I want to go on the record and state categorically that, in my opinion, technical analysis is of limited value when trying to predict the short-term movements of precious metals. However, there are millions of traders and investors out there who believe that it does work despite interventions, manipulations, and the ability of the bullion banks to fabricate a surrogate for actual physical gold by way of paper futures. In light of that, the short-term technical set-ups for gold and silver and the miners are all different in that after Friday's month-end bombardment, which originated in the London options market, that formidable uptrend line that began in December 2015 has finally been vanquished. The ramifications could be nasty next week because for the second year in a row, the seasonally strong month of September failed to shine (at least for gold). The big question is now whether or not we get a follow-through to the 200-dma at $1,252 before resuming the uptrend or will that large Commercial short position serve as a demand catalyst and limit any meaningful downside? END_OF_DOCUMENT_TOKEN_TO_BE_REPLACED 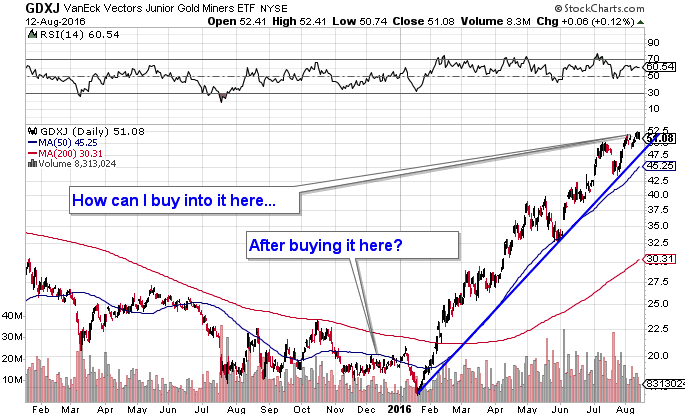 With the summer of 2016 passing by at an alarming pace, I think it is important to take a few moments away from the enchanting beauty of Georgian Bay and review a number of the key elements that have characterized 2016's breathtaking advance in gold, silver and the associated mining, development and exploration stocks. While gold bullion is ahead 26.6% year-to-date, the gold mining stocks have demonstrated their incredible contained leverage and why, when the market operates properly, they are vastly more rewarding than the physical metals themselves. However, the 2016 advance has had many analysts questioning the integrity of this latest move as the HUI (NYSE Arca Gold BUGS Index) and the XAU (Philadelphia Gold and Silver Index) have defied gravity, the laws of physics, the Law of Diminishing Returns, and just about every other law that historically pertains to the behavior of stocks. END_OF_DOCUMENT_TOKEN_TO_BE_REPLACED

Precious metals expert Michael Ballanger compares the Dec. 1, 2015 Gold COT Report with the latest one; the contrasts could not be greater. 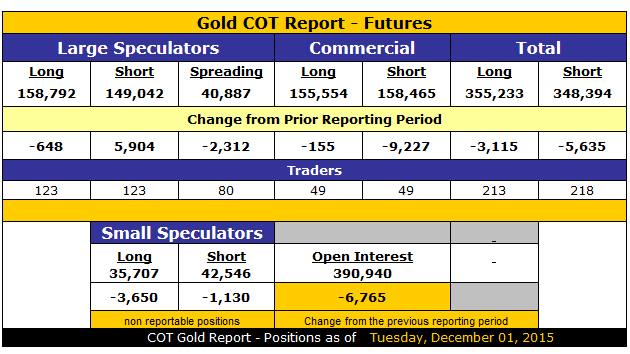 I have a question: "Does ANYONE have the foggiest recollection of just how incredibly bullish the Gold COT (Commitment of Traders) Report structure was back on Dec. 1, 2015?" END_OF_DOCUMENT_TOKEN_TO_BE_REPLACED 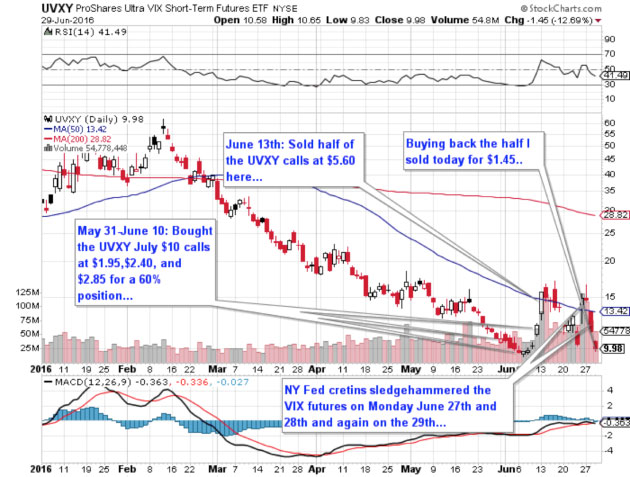 Over the weekend, I must have received three dozen "Emergency Email Alert" notifications by newsletter services and financial intermediaries that got absolutely obliterated Friday morning and were expecting more of the same on Monday, which they got in spades. This new generation of "wealth advisors" has, unfortunately, been living off the largess of Central Bank guarantees and the winks and nudges of the "Finance Ministers" and "Treasury Secretaries" and "Chancellors of the Exchequer," where they make investment decisions based not upon analyses of balance sheets or income statements but upon the collective wisdom of Champagne Socialists. I have been writing about this for about thirty-five years and while it has not yet manifested itself in the advance of the prices of precious metals to levels that would correspond to the level of coinciding currency debasement, especially in the United States and Europe, it is going to be the "Talk of the Town" here in 2016. END_OF_DOCUMENT_TOKEN_TO_BE_REPLACED 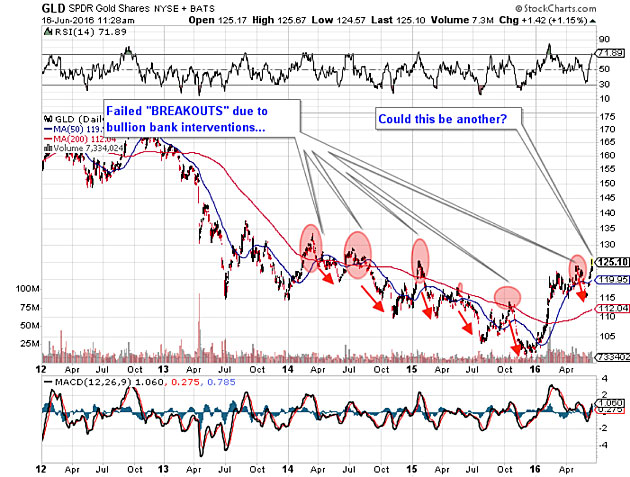 Janet Yellen just blew all remaining semblances of credibility believed to be still present at the U.S. Federal Reserve Board.

We have all heard for the past month or so that the Fed was going to hike the Fed Funds rate at today's meeting, the anticipation of which caused a rally in the U.S. Dollar (USD) and a surge in stocks - all while the bond market was rallying in response to weakness in the macroeconomic environment.

Well, they didn't raise as predicted back in March because of "China weakness," so today they didn't hike because of "soft exports" and "vulnerabilities in the global economy" and "Brexit worries" and a host of other totally clueless hypothecations. But the bottom line is that they didn't hike because the ensuing dollar rally would impair the collateral that underpins the massive debts owed by governments and homeowners to the banks that hold that debt. Stocks reversed lower when it became clear that the Fed has absolutely zero control over the U.S. economy, and is now truly caught in the headlights because banks are getting killed with the yield curve this "flat," and since the Fed's shareholders ARE "the banks," it takes on an aura of the surreal. END_OF_DOCUMENT_TOKEN_TO_BE_REPLACED