Last November I shared a promising trading opportunity to play on the Modern “Gold Rush” For Cryptocoins. Like the Great Gold Rush, I thought that those who sell equipment could benefit from new a “tulip mania” as this crypto buzz was called in the media.

I selected three chip makers, which were well known for the broad use of their products in the “mining” of cryptocoins. These companies are NVIDIA Corporation (NVDA), Advanced Micro Devices, Inc (AMD) and Taiwan Semiconductor Manufacturing Company, Limited (TSM). Firstly, I made the same comparative chart analysis of their stocks as I usually do for the classic mining stocks; it is funny that the word “mining” I used here has a totally different meaning.

We were on the right path as despite the market euphoria there was one stock, which lagged behind the others and the gap was significant. The laggard Advanced Micro Devices (AMD). It was the only one, which showed the negative price dynamics for the first ten months of 2017 with a -2.71% loss compared to +104.58% for NVDA, +43.94% for TSM and +14.62% for S&P 500. END_OF_DOCUMENT_TOKEN_TO_BE_REPLACED

There are two main types of suppliers to the crypto mining industry: electricity suppliers (up to 70% of all mining costs) and equipment suppliers. The massive demand for mining equipment attracts nimble middlemen, for instance, they resell the ASICs (application-specific integrated circuits, microchips) for 2x-3x of the original price tag, making relatively risk-free money on modern “diggers” that risk a lot. END_OF_DOCUMENT_TOKEN_TO_BE_REPLACED

So it's Friday and we have come to the end of another trading week and the question is, what positions will you be comfortable holding this weekend? Yes, I know there are lots of problems in Iraq and other parts of the world that can weigh on stock prices, but the reality is, there are always some stocks that are moving up in the world.

In today's video, I show you how to apply our "52-Week New Highs on Friday" Rules and how you can make money in the very short-term using this simple strategy. 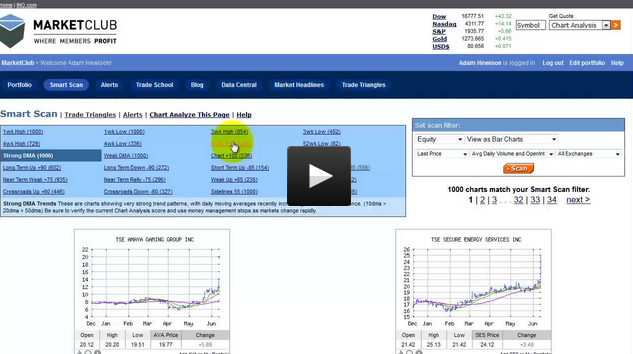 We have had a number of members use this strategy successfully and it is one that you should definitely look into. I will show you the exact steps that you want to take to make this happen for your own account. It's not complicated, it simply is a way to look at the market and determine whether you should be long a stock or short a stock over the weekend.

Every success this weekend with this technique,
Adam Hewison
President, INO.com
Co-Creator, MarketClub

Hello traders everywhere! Adam Hewison here, President of INO.com and co-creator of MarketClub, with your video update for Wednesday, the 26th of February.

What's Next For The Stock Market?

Are the markets going to continue moving higher or reverse and retest their lows again? There seems to be a disconnect in the indices with new highs mainly on the NASDAQ, thanks to Tesla, Netflix and some other tech leaders. The S&P 500 seems to be lagging and the DOW is in a funk. Many professional traders will be looking for the tone of the market today, does it seem positive or negative? One of the tricks they will probably employ is to give the market a half hour or even an hour to set its trading range for the day. Should the market move below the low of the first 30 or 60 minutes of the day, then there's a pretty good chance that you could see further selling come into the market later on in the day. Conversely, should the market break over the high of the first 30 or 60 minutes of the day, look for upside momentum to continue. Let’s see how events play out. 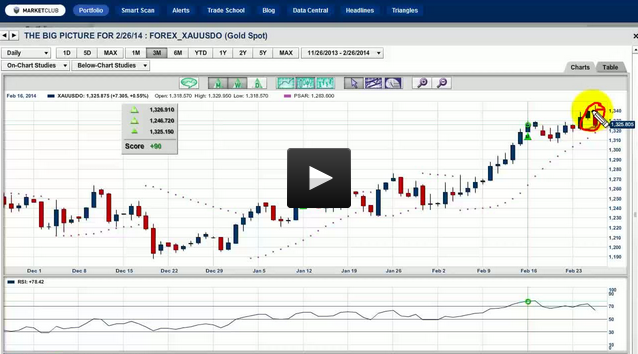 END_OF_DOCUMENT_TOKEN_TO_BE_REPLACED

Watch Adam discuss and tell you his target levels for the following stocks.