Last November I shared a promising trading opportunity to play on the Modern “Gold Rush” For Cryptocoins. Like the Great Gold Rush, I thought that those who sell equipment could benefit from new a “tulip mania” as this crypto buzz was called in the media.

I selected three chip makers, which were well known for the broad use of their products in the “mining” of cryptocoins. These companies are NVIDIA Corporation (NVDA), Advanced Micro Devices, Inc (AMD) and Taiwan Semiconductor Manufacturing Company, Limited (TSM). Firstly, I made the same comparative chart analysis of their stocks as I usually do for the classic mining stocks; it is funny that the word “mining” I used here has a totally different meaning.

We were on the right path as despite the market euphoria there was one stock, which lagged behind the others and the gap was significant. The laggard Advanced Micro Devices (AMD). It was the only one, which showed the negative price dynamics for the first ten months of 2017 with a -2.71% loss compared to +104.58% for NVDA, +43.94% for TSM and +14.62% for S&P 500. END_OF_DOCUMENT_TOKEN_TO_BE_REPLACED

There are two main types of suppliers to the crypto mining industry: electricity suppliers (up to 70% of all mining costs) and equipment suppliers. The massive demand for mining equipment attracts nimble middlemen, for instance, they resell the ASICs (application-specific integrated circuits, microchips) for 2x-3x of the original price tag, making relatively risk-free money on modern “diggers” that risk a lot. END_OF_DOCUMENT_TOKEN_TO_BE_REPLACED

This stock goes along with family, apple pie and the American flag. I'm talking about is Macy's, Inc. (NYSE:M). Every year for as long as I can remember Macy's has their annual Thanksgiving parade. It's quite a spectacle with marching bands, TV coverage and floating balloons. It all sounds wonderful and glossy and bright, but underneath the glitz and glamour, how is the business of Macy's really doing? 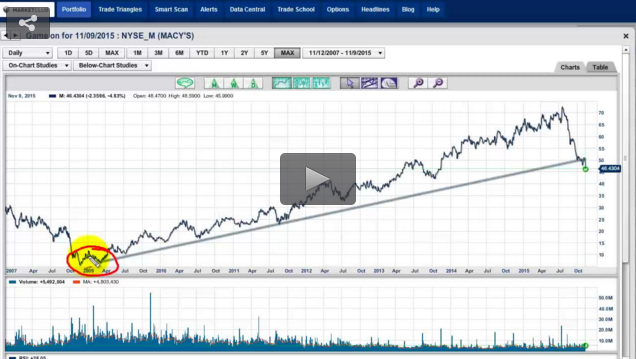 There are two months left in the quarter and the Fed continues to dither, and if anything, create uncertainty in the marketplace. I read this morning there's a 52% chance that they will raise interest rates in December. That means there is also a 48% chance that they will not raise interest rates in December. This uncertainty and lack of direction from the Fed is causing anxiety problems for the market. 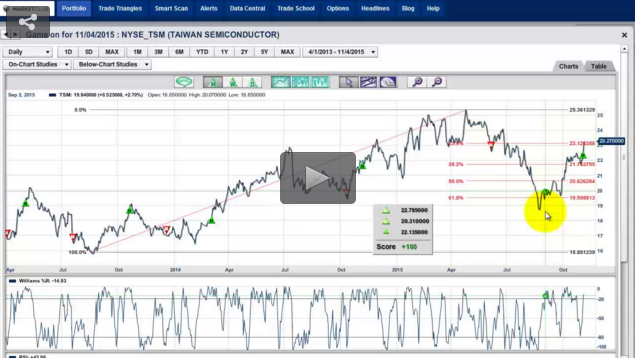 That aside, I do have a stock that I think will do well for the balance of the year. Taiwan Semiconductor Manufacturing Company Limited (NYSE:TSM) had a monthly green Trade Triangle trigger yesterday. The stock has the potential to move up as much as 20% in the next several months. In today's video, I'll show you why I think it can move up 20% from current levels. I will also share with you an important technical aspect that makes me believe that this can happen this quarter or early in Q1 of 2016. END_OF_DOCUMENT_TOKEN_TO_BE_REPLACED