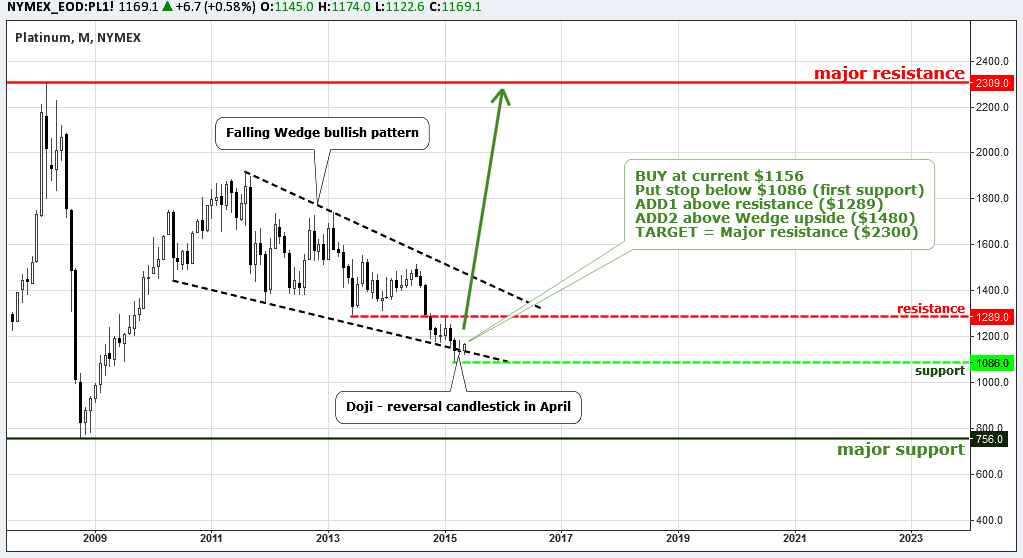 The old "Sell in May and go away!" saying is not working these days with precious metals. Both Gold and Silver did very well, moving upside beyond recently unforeseen levels in May.

As seen in the above monthly chart, Platinum is still in a long correction from the summer of 2011 after it hit $1918. Platinum lost almost half of its price, searching for the bottom for the last 6 months. It was a hard time for the traders, as stops were hit both in longs and shorts, but what is worse is that most traders could lose patience and belief in the metal. END_OF_DOCUMENT_TOKEN_TO_BE_REPLACED

Gold's decline was "pretty much forex related, and oil is coming down," said senior Commerzbank trader Michael Kempinski. "We need to see come stronger commodities in general, and a stronger euro, to push gold higher again."

The dollar rose to its highest level in a month against major currencies, pressuring bullion prices. Gold tends to move in the opposite direction of the U.S. currency, as it is often bought as an alternative investment.

Declining oil prices also dragged gold, as signs of weakening demand for crude and a rising dollar outweighed the supply threat linked to tensions in Iran and Nigeria. U.S. crude futures ended $2.54 lower at $122.19 a barrel.

Gold also dipped as U.S. stocks ticked up, dampening interest in the precious metal as an alternative investment.

"When crude oil goes down, gold also goes down with the stock market going up. Everyone is watching that correlation," said Adam Hewison, president of MarketClub.com in Annapolis, Maryland.

Hewison said gold should find support at current levels, but the $905 to $912 an ounce area represented a key support area. Should bullion fail to hold there, prices could test the lows set in June below $860 an ounce, he said.

Gold traders awaited release of U.S. economic data this week, including GDP numbers on Thursday and nonfarm payross, construction spending and auto sales data on Friday. These reports could have a significant impact on the dollar.

Traders also looked ahead to Wednesday's oil inventory data from the U.S. Department of Energy.

"The consensus is looking for another drop of crude oil inventories, which might provide some support for crude oil and thus also for gold," said Dresdner Kleinwort analyst Peter Fertig.