Other than President Donald J. Trump, Wells Fargo CEO Timothy Sloan has to be the most hated man in Washington, or at least he was this week.

On Monday, the New York Times published a story which said employees at the bank “remain under heavy pressure to squeeze extra money out of customers” despite “years [of] publicly apologizing for deceiving customers with fake bank accounts, unwarranted fees and unwanted products” and claims by top executives that they “have eliminated the aggressive sales targets that spurred bad behavior.” That was a reference to the 2016 scandal in which over a period of many years, thousands of bank employees opened millions of accounts without customers’ knowledge or consent.

But that proved to be only the beginning of the bank’s problems. Since then there has been a steady drip of one scandal after another, from forcing auto loan customers to buy insurance they didn’t need to allegedly overcharging military veterans for mortgage refinances.

Indeed, “each time a new scandal breaks, Wells Fargo promises to get to the bottom of it. It promises to make sure it doesn’t happen again, but then a few months later, we hear about another case of dishonest sales practices or gross mismanagement,” Rep. Patrick McHenry, R-N.C., told Sloan at a House Financial Services Committee hearing on Tuesday.

At the hearing, members of both parties lambasted Sloan and his bank. END_OF_DOCUMENT_TOKEN_TO_BE_REPLACED

So now President Trump has thrown himself into the discussion about Wells Fargo. Maybe now the bank will get the justice it deserves. And maybe now the message about Trump’s intentions about financial regulation will become less fake.

First a little background. Three months ago Federal Reserve Chair Janet Yellen made some pretty startling comments for a Fed chief, publicly criticizing Wells’ behavior toward its customers as “egregious and unacceptable.”

She was talking, of course, about the bank’s years-long practice of signing up its customers for checking accounts, savings accounts, credit cards and other products without asking their permission or even telling them. But since then there have been reports and admissions by the bank of several other excesses, such as charging auto loan customers for insurance they didn’t ask for, dunning mortgage customers for interest rate-lock extension fees when the bank itself caused the delays, overcharging military veterans on mortgage refinance loans, and allegedly closing customers’ accounts without telling them why it did so.

You would think that the Fed – which regulates Wells and other big banks – would have come down on the bank by now. Yet nothing’s happened since Yellen made those comments.

Then last week the president injected himself into the fray. END_OF_DOCUMENT_TOKEN_TO_BE_REPLACED

A few weeks ago Federal Reserve Chair Janet Yellen made some short – but very direct – comments about one of the big banks under the Fed’s oversight.

“Let me say that I consider the behavior of Wells Fargo toward its customers to have been egregious and unacceptable,” she said at her press conference following the Fed’s September monetary policy meeting. “We take our supervision responsibilities of the company very seriously. And we are attempting to understand what the root causes of those problems are and to address them.”

Now, for a person one of whose job requirements is to always speak cryptically, vague and ambiguously in public – Fedspeak, in other words – to call out one of the largest banks in the country and call its behavior “egregious and unacceptable” is pretty startling. That’s why I believe a major fine – at least $1 billion – against the Wells Fargo & Company (NYSE:WFC) by the Fed is coming.

Not only would it be justified, but certainly not out of line given past Fed penalties against other banks that committed far less “egregious” misdeeds. The fact that all of Wells’s transgressions were highly publicized and committed against consumers – millions of them – makes it even more imperative that the Fed let Wells have it between the eyes.

Let’s look at some recent big fines imposed by the Fed against the banks it regulates: END_OF_DOCUMENT_TOKEN_TO_BE_REPLACED

Hello MarketClub members everywhere. J.P. Morgan Chase & Co. (NYSE:JPM) quarterly earnings pushed well past analysts' expectations, helped by double-digit growth in deposits and record credit card sales. The company reported fourth-quarter earnings of $1.71 vs. estimates of $1.44 per share on revenue of $24.333 billion. It's stock price edged higher in intraday trading this morning, but has backed off the highs this afternoon.

"Our results this quarter were a strong end to another record year, reflecting our intense client focus and solid performance across our businesses," Dimon said in a release, citing a U.S. economy that may be building momentum.

Some in the media have dubbed it, "the best quarter ever for a bank". What do you think? 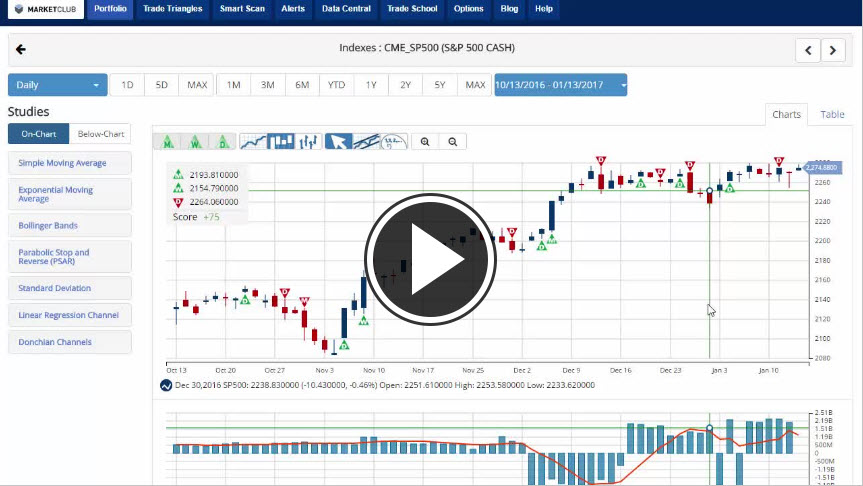 Key levels to watch the rest of the week: END_OF_DOCUMENT_TOKEN_TO_BE_REPLACED

Hello MarketClub members everywhere. Earning season kicks off with a trio of big banks, J.P. Morgan Chase & Co. (NYSE:JPM), Bank of America Corporation (NYSE:BAC) and Wells Fargo & Company (NYSE:WFC) are all due to release earnings on Friday. Wells Fargo will be in the spotlight after its high-profile stumbles in 2016, including the account-opening scandal that led to the ouster of its CEO and the failure to get its living will approved by regulators. Investors will be watching for how these issues are impacting the bank's financial results. 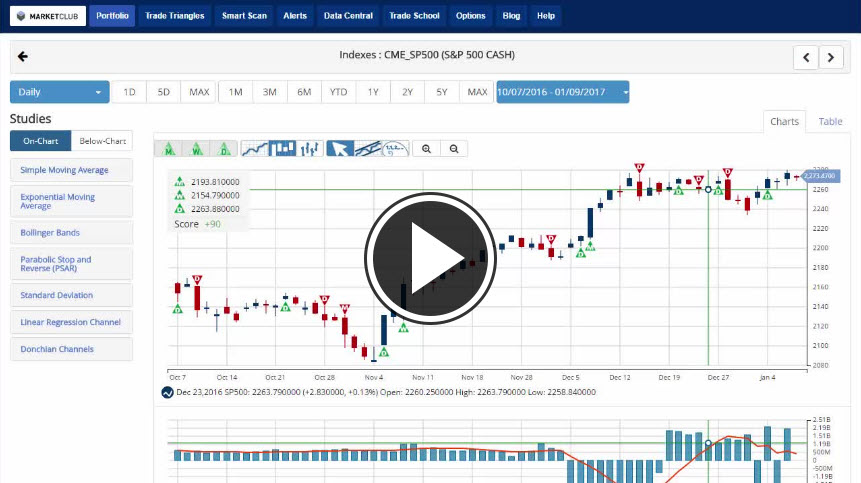 On the data side, retail sales will be eyed. The November data showed a slowdown from the previous two months. We'll see if higher consumer sentiment readings translate into a strong month for sales.

Key levels to watch the rest of the week: END_OF_DOCUMENT_TOKEN_TO_BE_REPLACED