What’s even more unusual is that they have set a record high at the same time as U.S. crude oil inventories. Usually, crude oil stocks rise as product stocks drop, and vice-versa, reflecting swings in refinery utilization, which simultaneously increase the demand for crude and output of petroleum products, and vice-versa.

One unexpected development giving rise to gasoline stocks has been a large, and thus far unexplainable, drop in U.S. gasoline demand. In the year-to-date, the Energy Department has reported demand is down 5.6% from a year ago. Such a drop might only be expected if a recession had hit, or perhaps a major spike in gasoline prices had occurred.

There are no signs of a recession. And retail gasoline prices are about 33% higher than a year ago, but the current U.S. average of $2.30/g is not so high as to cause a major drop in gasoline consumption. And prices have been pretty steady since last spring.

Winter storms can also temporarily reduce gasoline use. But the trend cited has been over a six-week period and the weakness started in December.

One other possibility is a miscalculation of gasoline exports by the Energy Department. If it estimates that gasoline exports are much higher than they actually were, it will underestimate domestic demand.

Whatever the reason(s), it is abundantly clear that gasoline being supplied is far out-of-balance with demand. U.S. refineries have begun cutting production to correct the imbalance.

But it appears that deeper cuts are coming. At least three more refiners have cut runs, according to a recent news report. But when refinery utilization drops, so does the demand for crude oil. And this is occurring even before OPEC’s production cuts have yet to reduce its exports to the U.S. And so crude stocks have been rising.

If refinery runs are cut even deeper, crude stocks could continue rising fast. My base case forecast shows crude stocks rising from their most recent level of 518 million barrels to 542 million by the end of the first quarter. 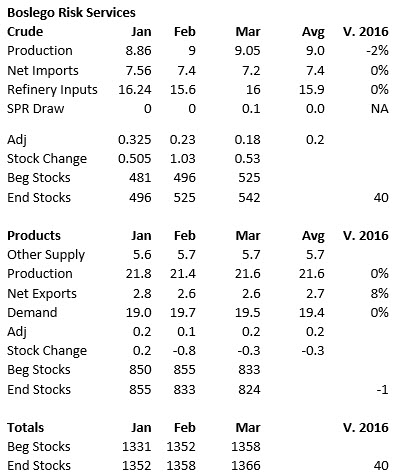 It remains to be seen how much OPEC’s exports to the U.S. will drop. But after seven weeks into the cut agreement, we should know very soon. Oil tanker transit time from the Middle East to the U.S. Gulf Coast is about 35-50 days.

I am estimating U.S. crude imports from OPEC countries will only drop about 10%, or 200,000 b/d from OPEC members excluding Venezuela and Nigeria. The oil minister from the South American producer has said they will keep their shipments to the U.S. “steady,” and Nigeria has not output quota as it struggles to ramp its production back up.

Unless the cut is much larger than what I expect, U.S. crude stocks are likely to keep building as indicated above. As a result, the OPEC cut will be ineffective at getting U.S. stocks to draw.

OPEC has stated that the goal of their cutback is to bring OECD stocks back down to their five-year average. The U.S. has the largest surplus of oil inventories, and so if OPEC does not cause U.S. stocks to draw, it will fail to meet its goal.

If OPEC’s cut is seen as being ineffective, the record high, long oil position of hedge funds is likely to drop due to selling. And a resulting price decrease could have a domino effect as traders seek to contain losses.

Traders should keep a close eye on crude stocks, gasoline stocks, crude imports and refinery utilization for signs of how this scenario is developing.