The crude oil price started the year off strong, as January posted the highest OPEC Reference Basket price ($66.85) since November 2014, the month in which the Saudis decided to wage an oil price war with American shale oil. But the market gave up its 2018 gain during the first week of January, as the Energy Information Administration (EIA) incorporated the huge November production surge into its short-term outlook and weekly time series data. To top it all off, Baker-Hughes reported the most significant one-week gain in its oil-directed drilling rig count.

Whether the market shifts back to bullish sentiment, or whether the bearish sentiment takes control this year, depends mainly on several key assumptions. The central hypothesis is how fast shale oil production will grow this year, and the second is what OPEC production will be, given the on-going risk to Venezuelan output. Based on U.S. production from August through November, the recent lagged response in drilling rigs, and the high prices experienced October through January; I expect that U.S. production will rise faster than either the DOE or OPEC assume in their forecasts.

The EIA released its outlook, revising its U.S. crude production estimates much higher. For the year, it now expects crude production to average 10.59 million barrels per day (mmbd) in 2018, and to exit the year at 11.13 mmbd.

The EIA’s estimate of production for February is 10.260 mmbd. That figure is 1.07 mmbd higher than August. If anything, EIA’s 2018 prediction seems low.

EIA also assumes that OPEC production will average 32.4 mmbd for the year. That figure is the same as EIA’s January estimate. Incorporating global supply and demand, it forecasts a build in global stocks of 45 million barrels for 2018. OPEC reported that ending December 2017 stocks were 109 million barrels above the recent 5-year average (2012-2016), which includes three glut years. 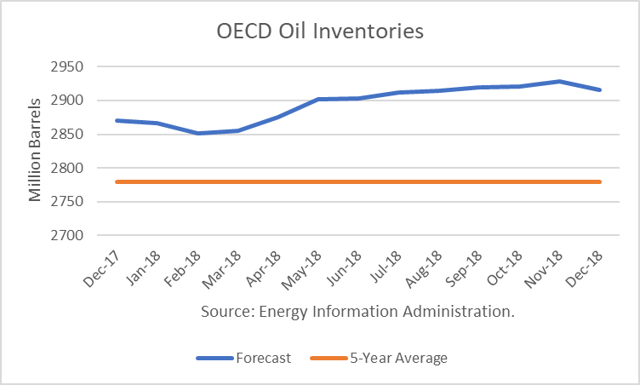 This is not where OPEC wants inventories to be when the deal is scheduled to end. But Saudi Energy Minister Khalid al-Falih had recently admitted in an interview that OPEC’s job would not be done at the end of 2018. So the question is, does it try to roll-over the deals for a third year?

The statistical team at OPEC was challenged to incorporate the February surprises reported by the EIA into its forecast with short notice. It increased its U.S. total petroleum liquids forecast by only 160,000 b/d, far short of the 350,000+ b/d increase by the EIA.

I created two scenarios for 2018 using OPEC’s own “call on OPEC oil” projections: the first uses OPEC’s own projection for its 2018 production of 33.2 mmbd, and the second uses the January estimate, 32.4 mmbd.

Under the first scenario, global oil stocks would rise by 109 million barrels for the year. This outcome would be extremely bearish. 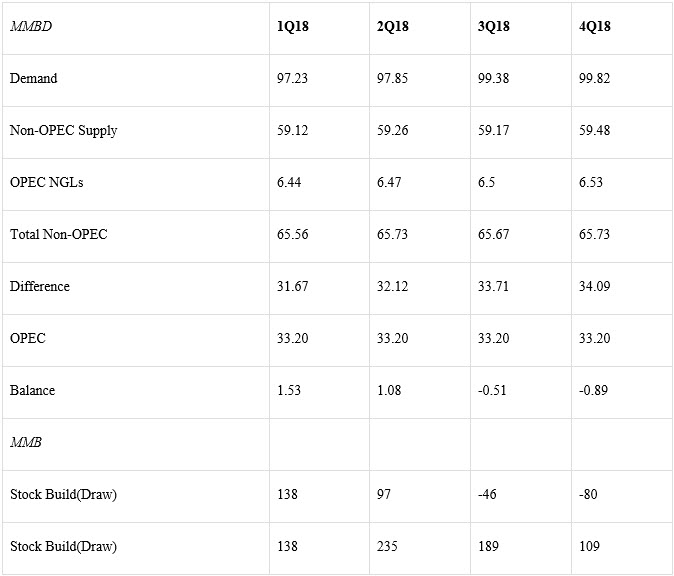 The second scenario produces the opposite outcome, a draw of 179 million. This result would be extremely bullish. If this scenario is on track, the production deals would be dissolved before year-end, in my opinion, because the resulting price surge would provide too much production incentive. 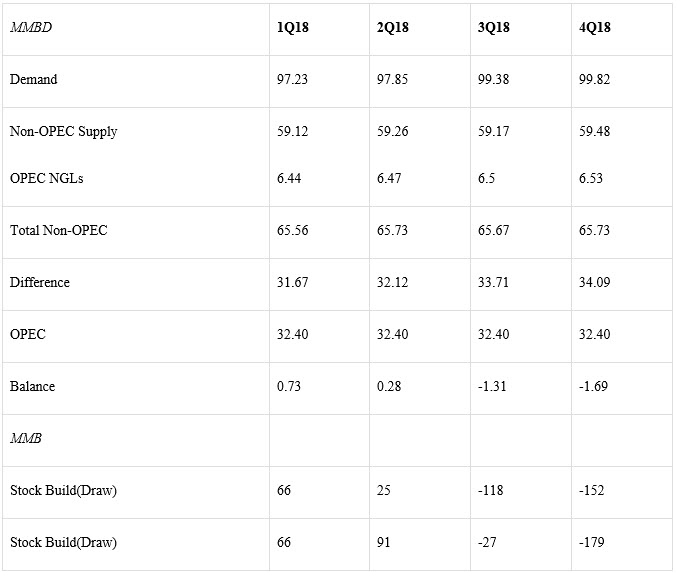 The wildcard in OPEC production this year is Venezuela. Output in that country has dropped to 1.61 mmbd, down from 2.0 mmbd in January 2017. Some analysts expect production to keep dropping, but John Kilduff thinks production has bottomed and could actually recover this year. It seems they would need more loans from China to accomplish that.

An issue right now is whether the Trump Administration will impose sanctions on PDVSA, the national oil company. The effect would be to exclude about 600,000 b/d of imports from the South American country. However, based on past experience, the 1973-74 oil embargo, the oil industry will find a way to re-route traffic, such that neither exports from Venezuela nor imports to the U.S. are affected.

The outlook for 2018 could shift in either direction, depending on how supply and demand trends develop. Right now, the best evidence implies that U.S. production growth will exceed expectations, perhaps by a large amount since the lagged effects of higher crude oil price from November through January have yet to be felt.

Given this is the soft demand part of the year, bearish sentiment is likely to rise in the weeks ahead. I expect the $50/b WTI level to be tested.

2 thoughts on “2018: Supply/Demand Trends Can Make Or Break Oil Prices”