This week we have a stock market forecast for the week of 5/2/21 from our friend Bo Yoder of the Market Forecasting Academy. Be sure to leave a comment and let us know what you think! 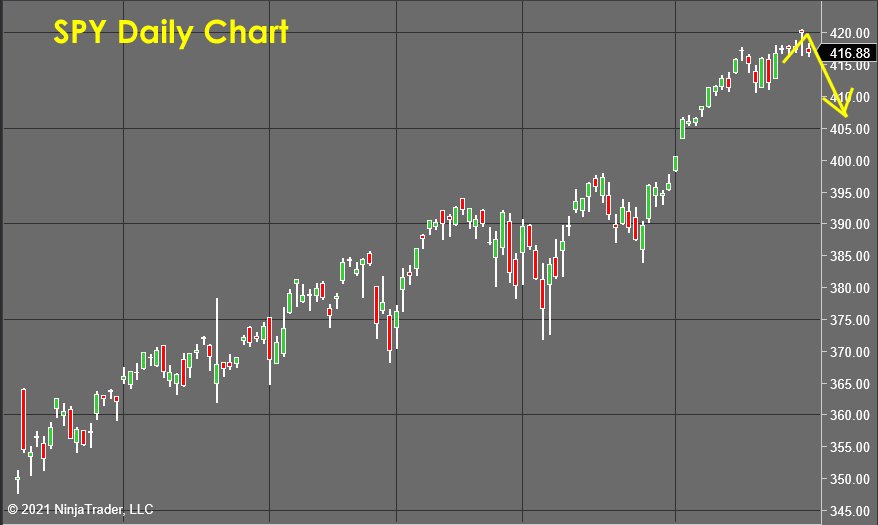 My short-term forecast hasn’t changed since last week and can be seen in the form of the yellow arrows on the daily chart here. I expect to see a correction to form next week and then another push back up to retest the highs over the next couple of weeks.

The patience we have had to exhibit over the last month or two is paying off as there are a lot of nice opportunities showing themselves in individual stocks this week... Let’s look at a few! 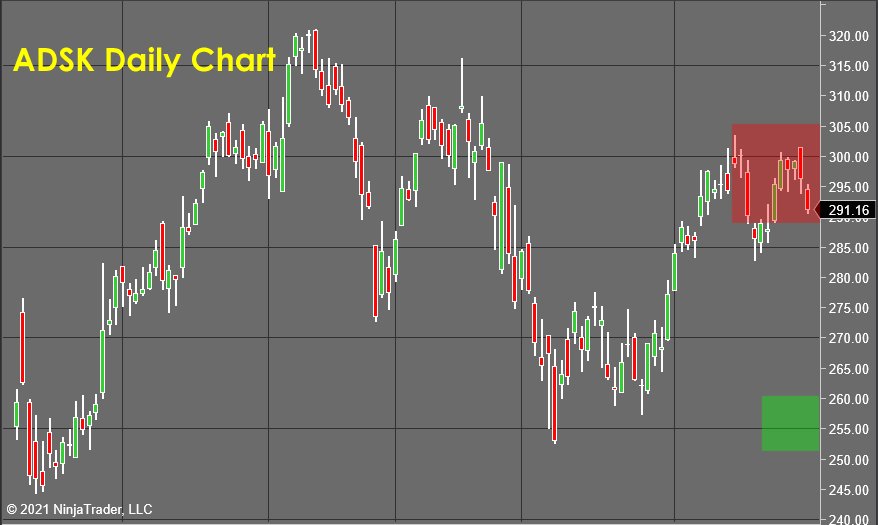 Autodesk (ADSK) has been fighting unsuccessfully to break out above the $300 per share level. Over the last few days of this week, the bulls were rejected, and the price looks like it’s ready to ping pong back down to the recent range lows near $285.

That bearish move would set this stock up for a more significant fall... Back down to explore the lows set earlier this year near $260 per share. This trade is attractive for short exposure anywhere within the red zone, with stop-loss orders set above that zones high.

My forecast would be for price to make its way back down to the green zone as the large liquidity pool near $260 per share is tested. 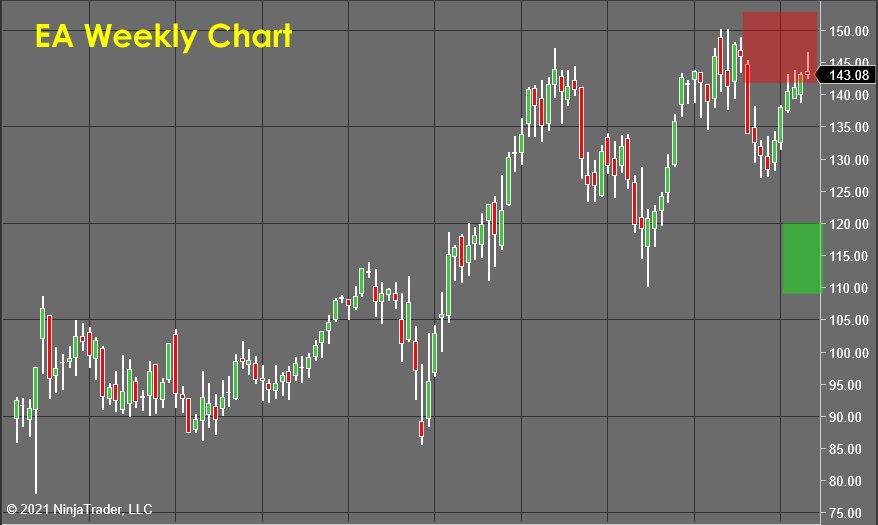 This action and the failure of the recent rally to even retest the highs will likely produce some bearish follow-through to the downside in the weeks to come. This new position opportunity is considered attractive as a short anyplace within the red zone, with stop losses set above that area.

My forecast would be for the price to drop down to test the area indicated in green near the $120 per share area.

Insiders at JPMorgan have come as close as humanly possible to a 100% trading record. Official documents show a 99.52% win rate for 6 years - with 3 years of ZERO down days. New research lets you "shadow" their trading desk and their awesome performance. 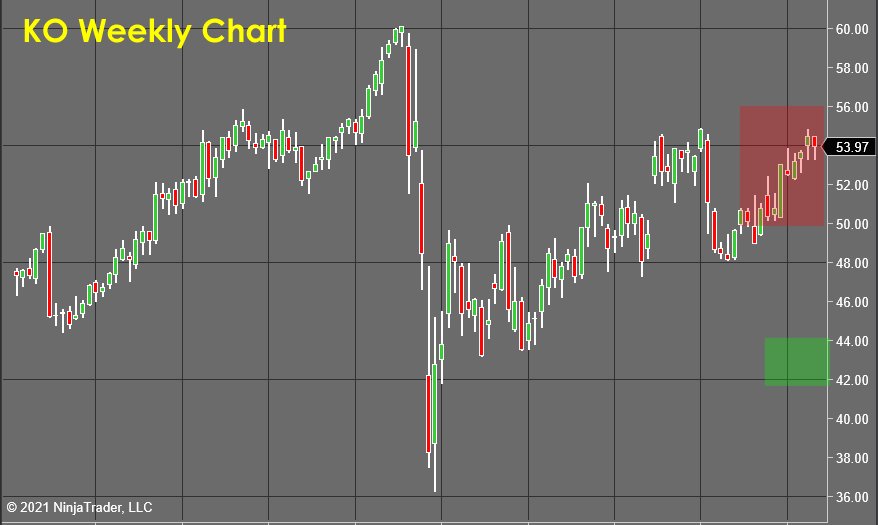 Coca-Cola (KO) confirmed a double top on its weekly chart this week and now needs to respond with relative weakness in the week to come as the market indexes drop back down into correction.

If it cannot confirm in this manner and instead holds on near highs next week, it would make me question “if not now... when” and start looking for an elegant place to exit the trade for a loss. 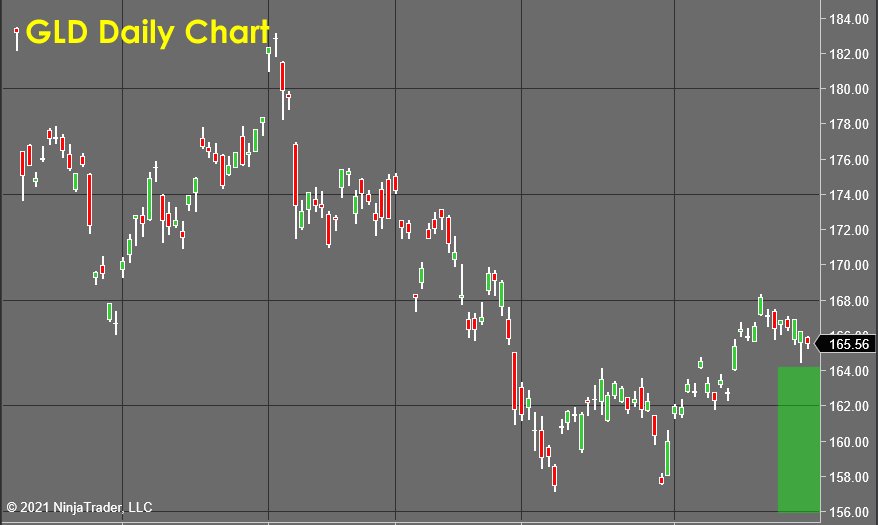 Gold (analyzed here using GLD) worked out a textbook “Breakout/retest” pattern as price came back in to retest the support near $164. This correction was clearly forecast last week, so it was NOT a surprise and therefore didn’t cause any undue stress or negative emotions.

Instead, this is a positive week for the position, as this correction will create new levels of support that will become the places that the bulls defend in the future, thus ratcheting up the price as the new uptrend builds up the bull’s confidence and energy. 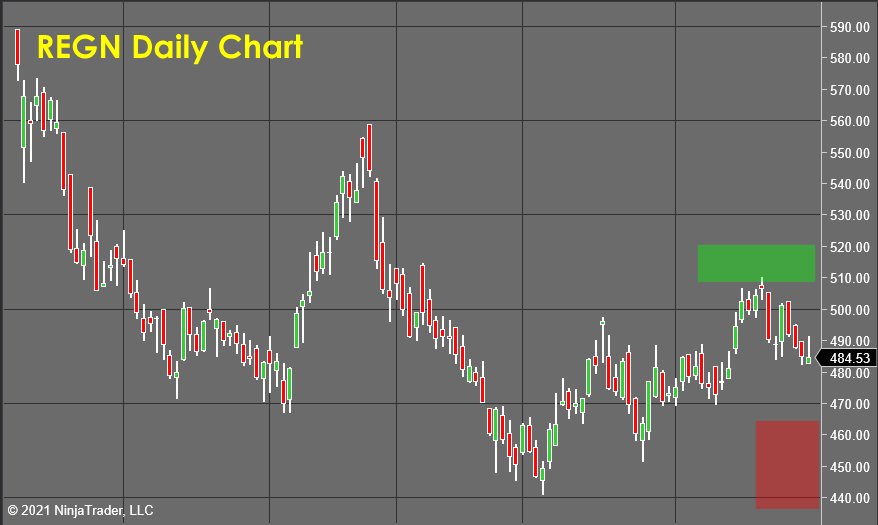 Regeneron Pharmaceuticals (REGN) is working its way through a complex correction after reaching the initial profit target last week. As the correction forms, the bears have been quite active. The tools I use to measure supply and demand forces are indicating to me that the odds are higher that this stock will remain channel bound for a while.

How things end up next week will be very important. If the correction ends and the highs near $510 are retested, then I would maintain exposure and let the trend unfold.

However, there are signs of increased bearishness in this correction, and if those persist through next week, it would be time to close out and move on, as there are likely better places for that risk that won’t waste so much time.

Eurodollar vs US Dollar 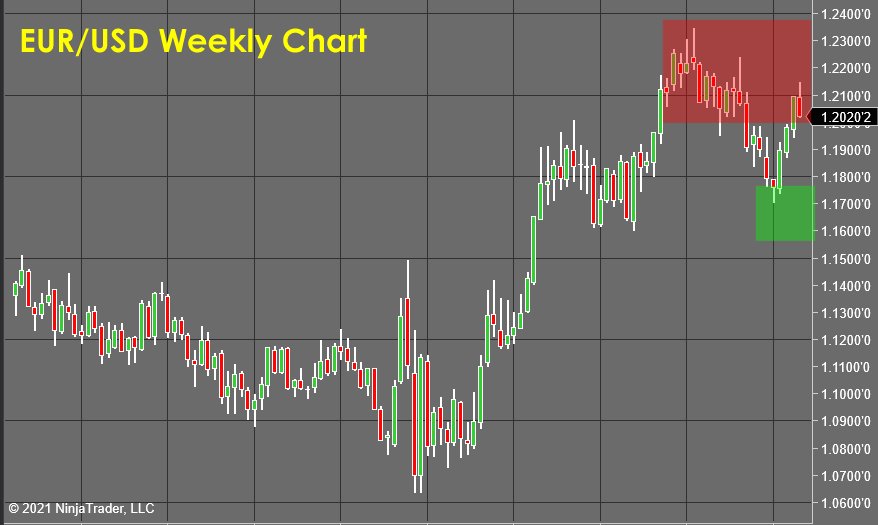 I brought the EUR/USD currency pair back into these forecasts last week because I could see a reversal starting to take shape. The supply was overwhelming demand, and as forecast last week, this market produced a false breakout on Thursday, which was the “multi-wave topping pattern” I spoke of in my last forecast.

Closing out the week with as much weakness as we saw confirms the weekly head and shoulders pattern, and I would expect that prices would begin pushing lower next week.

This offers a nice chance for some short exposure with a multi-month time horizon. This short is considered attractive anywhere within the red zone and should produce at minimum a retest of the lows near 1.1700.