Have you ever heard of the Super Bowl Indicator? Who do you want to win? Are you a Bear or a Bull?

I don't know about you, but I want the Seahawks to win.

There are two notable exceptions as of late:

2013 saw the Baltimore Ravens (AFC) win the Super bowl, and the DOW rose 26.5%. This should have been a bear market. END_OF_DOCUMENT_TOKEN_TO_BE_REPLACED

See what happens in the financial markets when the bears vanish

If Inspector Gadget or Maxwell Smart had lived in the digital age, their bosses would have used the smartphone app Snapchat to deliver their secret missions.

Snapchat is a popular app with about 8 million users that lets your smartphone send a photo that self-destructs seconds after your recipient views it. As of September 2013, users were sending about 350-400 million vanishing messages a day -- which compares with the 127.5 million shares that changed hands in the Dow on Jan. 27, 2014.

But when Evan Spiegel, the Stanford student who came up with the idea, unveiled it to his product design class in 2011, his classmates gave it a thumbs-down. Disappearing photos? Who will use it? Little did his classmates know how the app, originally called Picaboo, would go on to capture the attention of teenagers and young adults. And even a few older folks who want to connect with them, such as 51-year-old Senator Rand Paul, who recently signed up to woo younger voters.

The idea of the disappearing photo applies beautifully to the situation in the stock market today. Pessimists on stocks are disappearing quickly. And so are bearish analysts. Not in 10 seconds, but they are still doing a version of a Snapchat disappearing act. Here's how The Elliott Wave Financial Forecast describes it (emphasis added) in this excerpt from our just-released 2014 State of the Global Markets report: END_OF_DOCUMENT_TOKEN_TO_BE_REPLACED

In failing to take a “healthy” correction to the equivalent of SPX 1350 to 1450 from the upside target zone of 1550 to 1590, the market is now running on policy and momentum. Hence we now dub thee Young FrankenMarket; Ben Bernanke’s creation, sustained by government and legacy MBA debt, following Alan Greenspan’s monster that was stitched together with artificially low interest rates that ultimately manifested in a huge commercial credit bubble.

Payrolls came in at 165,000 and an over bought, over loved* market popped its cork and exploded into blue sky. It had to be more than an okay ‘jobs’ report that did the trick. It was likely the combination of a still inflating Fed (and ECB, Europe popped hard as well) with some data that was good enough, but not so good as to call into question the Fed’s systematic inflation regime. This is Bernanke’s FrankenMarket, created by policy.

After making bearish patterns and/or negatively diverging from the Dow and S&P 500, the Russell 2000, Nasdaq 100 and Semiconductors all broke to new all-time (RUT) or recovery (NDX, SOX) highs on Friday. This left one notable holdout, the often-watched Transports. Since I normally do not give much weight to Dow Theory, I’ll not do so now. But it should be noted that the Trannies are not at new highs… yet [edit: They are now].

So it appears that recent writing I have done about a topping process may have been incorrect or at least, early. The current period reminds me a lot of Greenspan’s monster that emerged from the credit bubble early last decade, FrankenMarket as I called it in the first public article I ever wrote. END_OF_DOCUMENT_TOKEN_TO_BE_REPLACED

Silly season is coming to a close very soon and it's time to get back to serious trading.  We were wondering....

As always, we welcome your comments. 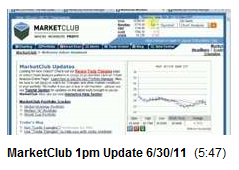 Here is your 1p.m. update for Thursday, June 30th. Today Susan reviews the very bullish market that we seem to be trading in this week. Susan also gives you some pointers on how to follow the "52-week new highs on Friday rule." If you have forgotten what those rules are, we have posted them here as a refresher. Watch today's update now!

These are the only three rules you need to trade with “The 52-week new highs on a Friday rule” successfully.

So, there you have it!