Last February I called for a long position in Freeport-McMoRan Inc. (NYSE:FCX) amid temporary weakness within a consolidation phase. Later on in March when the expected weakness reached support I posted an alert for you to catch the opportunity and set the target area with a $19.78-26.30 range. At the start of this month, the initial target at the $19.78 level was hit, producing a 55% profit for the year. My congratulations are to all who took the longs!

I also mentioned Southern Copper Corporation (NYSE:SCCO) for those who prefer larger market cap companies. That trade produced a good profit of almost 39% in the same period. However, it doesn’t compare to the 55% profit from FCX even though it set the new record high at the $50.90 breaking above the previous long-term top ($49.82).

Below are the poll results where you voted for these two stocks last March. END_OF_DOCUMENT_TOKEN_TO_BE_REPLACED

Last month in my post I warned you that the market for copper and Freeport-McMoRan Inc. (NYSE:FCX) entered the consolidation period, which meant that it was good to let the market drift lower and wait for better price opportunities. As you could see in the chart below patience indeed is a key to everything.

Copper was a hit at the end of last year. The price has gained more than 30% at the top of $2.74 from the end of last October. And then the players started to book the profit pushing the price down to the $2.4 area. It’s wise and natural to save such an incredible gain. END_OF_DOCUMENT_TOKEN_TO_BE_REPLACED 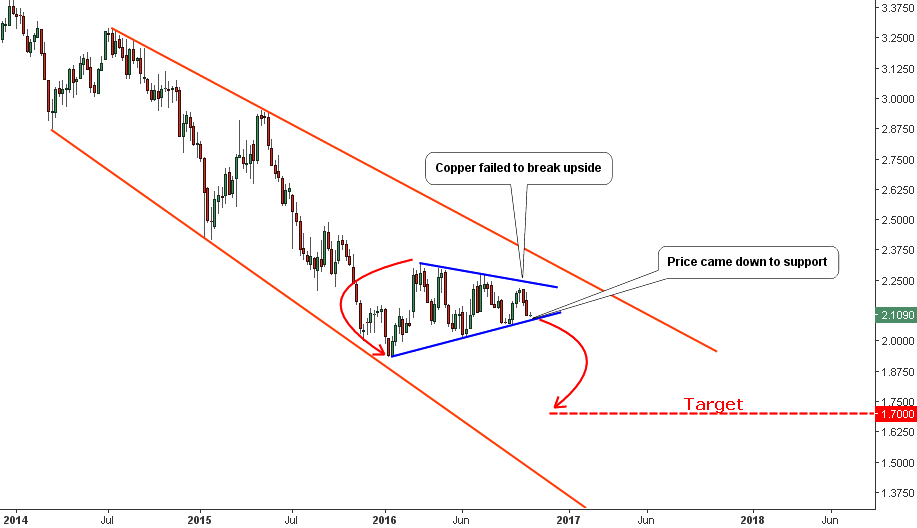 Copper’s price has been descending within an orange expanding downtrend for the past two years. The Contracting Triangle pattern (highlighted in blue) reflects the sideways structure of the market this year. END_OF_DOCUMENT_TOKEN_TO_BE_REPLACED