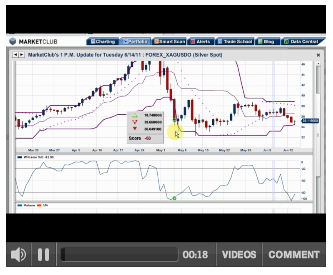 Good afternoon and thanks for stopping by for the 1PM Afternoon Update.

Adam Hewison here, co-founder of MarketClub, with your 1 p.m. market update for Tuesday, the 14th of June.

The Relative Strength Index, or RSI, is a popular indicator developed by Welles Wilder, and was first introduced in the book New Concepts in Technical Trading Systems. RSI is a momentum indicator used to measure changes between higher and lower closing prices. END_OF_DOCUMENT_TOKEN_TO_BE_REPLACED

Born of a marriage between technical analysis, physics and pattern recognition, the pH-Indicators are elastic and focused on the future, like today’s broadband electronic markets. Static terms such as ‘overbought’ or ‘oversold’ force traders to make decisions with two-dimensional road maps in three-dimensional real time. These new indicators provide equity and forward market traders with tools that accurately reflect the market environment. The indicators help traders construct the appropriate three-dimensional map, showing first where the market itself wants to go and second, how to build a position ahead of and within the trend of those markets. As CAT-SCANs are to X-rays, these indicators offer a brand-new view of market internals. Boundaries imposed upon traditional concepts of momentum are no longer applicable.

In this session, Richard explains his unique outlook on pH-Indicators and how he uses them to achieve financial success. Richard uses these indicators to successfully manage money and he carefully considered the time and place to present them to the public. He chose TAG 20 as the appropriate forum because he felt it is where real traders come together in search of new methods to make real money. Workshop attendees were the very first traders ever to have access to Richard’s unique work; now you can share his insights, as well.

Saturday Seminars are just a taste of the power of INO TV. The web's only online video and audio library for trading education. So watch four videos in our free version of INO TV click here.

The stochastics indicator created by George Lane measures the relative position of the closing price within a given time interval. This indicator is based upon the premise that prices tend to close near the upper portion of a trading range during uptrends and near the lower portion of a trading range during downtrends. When prices close in the middle of a range, this suggests a sideways market. There are two components to this calculation, the %K value and the %D value. The %K is calculated as follows: %K= (C-Ln / Hn – Ln) x 100 where C = closing price of current period, Ln = lowest low during n time periods. Hn = highest high during n time periods and n = number of periods.

These formulas produce two lines that oscillate between a scale of 0 and 100. As with the other oscillators, a stochastic value below 30% suggest an oversold condition, while a value greater than 70% suggests an overbought condition.

Some simple trading rules apply in the use of the stochastics indicator. A sell rule would be to sell when the fast (%K) crosses over the slow (%D) and both are pointing down, but are still above the 70% level. A buy signal would be triggered when the fast crosses the slow, and both point up, but are below the 30% level.

Another type of signal occurs when the stochastics indicator diverges from a price move similar to momentum and RSI.

You can learn more about the Stochastics and George Lane by visiting INO TV.