In this post, I would like to share with you the comparative dynamics of gold and top gold stocks starting from the date when the recent local bottom of gold was set at $1241 on the 7th of October, 2016 to see how top gold stocks reacted to the recent gold reversal.

Chart 1. Gold And Top Gold Stocks: Not All “Birds” Flew To The North

I put the chart the gold together with the 5 top gold mining stocks by market cap, which I started to cover this August. These are (ranked by market cap): END_OF_DOCUMENT_TOKEN_TO_BE_REPLACED

Back in March in my major gold update I warned you that what was being billed as a New Bull Run could easily turn out to be a complex correction. In that post’s chart, I didn’t put the small Fibonacci retracement level at 38.2% as I was impressed with the strong move to the upside from the bottom and I thought it would be useless. These days the situation has changed and I put an updated chart below. 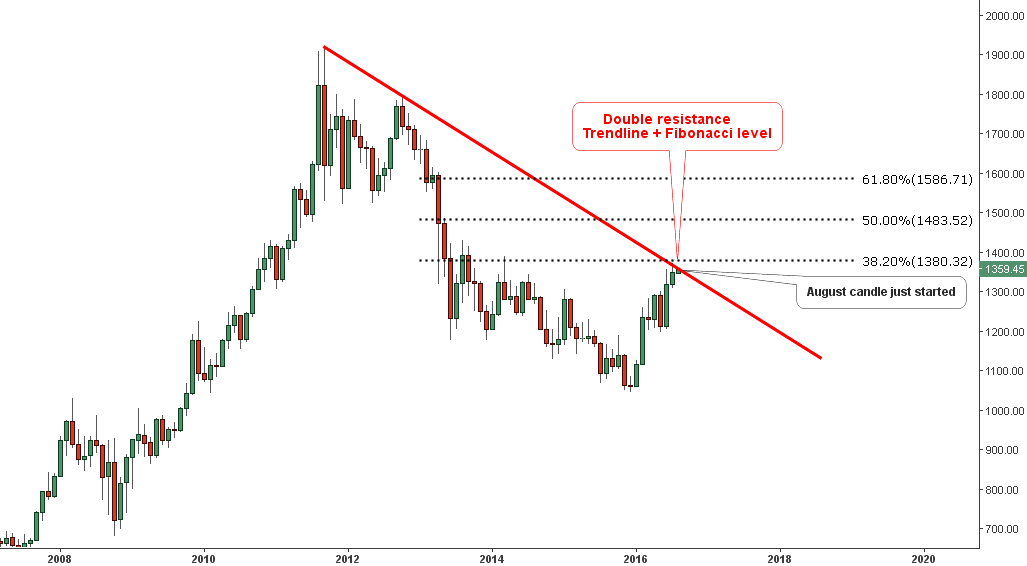 Last month the gold stalled at the red trendline resistance as the price closed 25 dollars below the month’s maximum. This month the price action will be crucial as there is no room to step back. It would be hard work to crack double resistance within the $1360-1381 range, which consists of the red trendline and the 38.2% Fibonacci retracement level. END_OF_DOCUMENT_TOKEN_TO_BE_REPLACED

The Gold Report: A 10-year U.S. bond yields 2% currently. How is that changing the market?

Randall Abramson: We typically view the markets and our investment process through top-down and bottom-up lenses. Our top-down tools are telling us that all systems are "go," and that there are no immediate hurdles ahead. This low-growth environment has allowed the broader markets to remain in a bull phase for longer than is typical. In fact, we've not had even a market correction of 10% or so for way longer than normal.

TGR: The World Gold Council (WGC) reports that central banks bought 477.2 tons of gold in 2014, which was nearly a 50-year high. What do you make of central banks buying gold at peak Cold War-era levels? END_OF_DOCUMENT_TOKEN_TO_BE_REPLACED

The Gold Report: The price of gold is flirting with a five-year low. Do you attribute this solely to the strength of the U.S. dollar, or are there other factors at work?

Ralph Aldis: There are other factors. Most important is the strength of the equity markets. Looking at a six-year window, we have seen, for the third time in the last hundred years, the highest returns for such a period. This happened before in 1929 and 1999. These phenomenal returns have been fueled not by fundamentals but rather by the U.S. Federal Reserve, which is trying to jumpstart the economy.

All this has taken people's eyes off gold, but it won't go on forever.

Rob Cohen: Gold has collapsed when compared to the U.S. dollar, but not when compared to other hard assets. For instance, since gold was allowed to float in 1971, its average price ratio per ounce to the price of a barrel of oil has been 15:1. Right now, it's about 13:1, so it's not that far from the mean. We remain a little puzzled by what has happened. Going back to 2008, there's been a strong correlation between the expanding balance sheet of the Federal Reserve and the rising price of gold, but that link has been cut, at least for now.

We have also had some positive economic data out of the U.S.

TGR: Is this positive data really all that positive? END_OF_DOCUMENT_TOKEN_TO_BE_REPLACED