O, Canada! What a historic moment for the cannabis industry!

Now that legalization has set billions of dollars in motion, Cannabis Stock Trades members are in a prime position.

We've been prepping our portfolios to capitalize on this giant day and it's finally here.

Cannabis stocks have a clear history of jumping higher before and after these key legalization dates.

On January 1, 2014, Colorado became the first US state to legalize recreational cannabis.

It was a breakout moment for the US cannabis industry – and it sent US cannabis stocks soaring. END_OF_DOCUMENT_TOKEN_TO_BE_REPLACED

Canopy Growth Corp (CGC, WEED) set the cannabis sector on fire last week after announcing a $3.8 billion investment from Constellation Brands (STZ), the third largest beer brewer in the US.

Canopy shares jumped 47% in one day on the news and almost 100% in the following week.

This week, I already see this same cycle about to repeat itself.

Whispers on the Street are speculating that a second cannabis megadeal is close at hand. 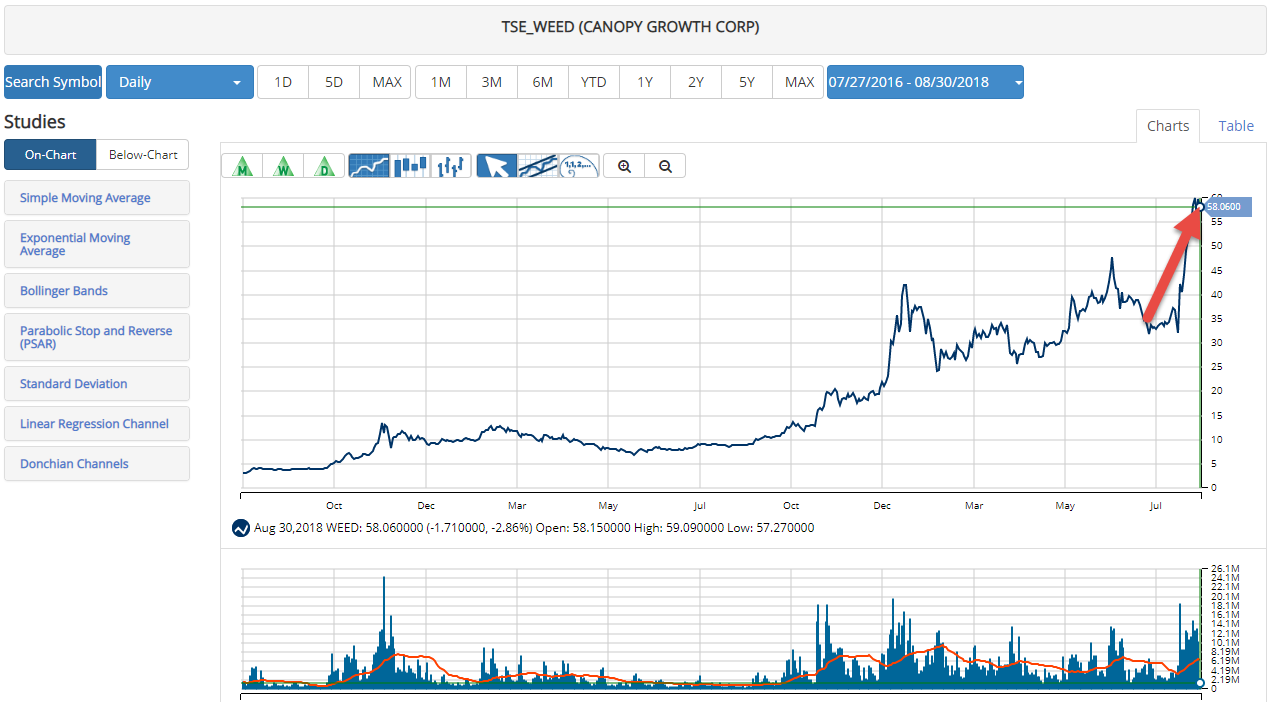 If that’s the case – and I believe it is – it’s creating another great investment opportunity. END_OF_DOCUMENT_TOKEN_TO_BE_REPLACED

October 30, 2017 was one of the best days of the year for the young cannabis industry.

It was a groundbreaking moment for the cannabis industry because it was the first time that a big alcohol company had invested directly in a cannabis company.

In the short run, Canopy shares jumped more than 23% in one day on the news.

In the long run, it triggered a 10-week rally in Canopy – and the entire cannabis sector – that sent shares deep into a new all-time high. Take a look. END_OF_DOCUMENT_TOKEN_TO_BE_REPLACED

Germany has quickly emerged as one of the fastest-growing medical cannabis markets in the world.

According to a study on the German health insurance market, 500 German patients requested medical cannabis in January of 2017.

In December of the same year, the number of patients requesting reimbursements for cannabis prescriptions skyrocketed to 13,000.

What was the biggest factor that drove the huge spike?

Looking forward – this bullish trend is expected to accelerate.

Tens of thousands of new patients are expected to enroll in Germany’s medical cannabis program in 2018.

Analysis originally distributed on May 16, 2018 By: Michael Vodicka of Cannabis Stock Trades

Canadian cannabis stocks got a big jolt this week after an early industry leader announced it has applied for a listing on the New York Stock Exchange. This looks like the beginning of a new trend in the cannabis sector – and today I am going to reveal three strategies to potentially profit.

Canopy Growth Corp (TWMJF) announced on Monday that it has applied to be the first Canadian cannabis company to trade on the New York Stock Exchange.

“Canada’s biggest marijuana company has applied to become the first pot producer to list on the New York Stock Exchange.

Canopy Growth Corp., which already trades on the Toronto Stock Exchange under the ticker symbol WEED, said Monday it expects its shares to begin trading in New York under the symbol CGC before the end of May.

Chief Executive Officer Bruce Linton said earlier this year that he was one day away from filing to list on the Nasdaq Stock Market but pulled back to focus on closing a deal with alcohol giant Constellation Brands Inc. He said Monday that he chose the NYSE over the Nasdaq because of the additional credibility it lends his company.”

This is big news and another big-time win for the fast-growing cannabis industry.

Canopy is in position to be the first Canadian cannabis company listed on the New York Stock Exchange (NYSE). That should increase interest in Canopy and the broader cannabis sector.

Canopy’s potential uplisting to the NYSE also shows that the cannabis industry is quickly gaining a lot of credibility. The uplisting should trigger more capital inflows into the sector.

Canopy did even better – shares were up as much as 10% on the day.

Canopy is back within striking distance of a new 2018 high. Take a look. 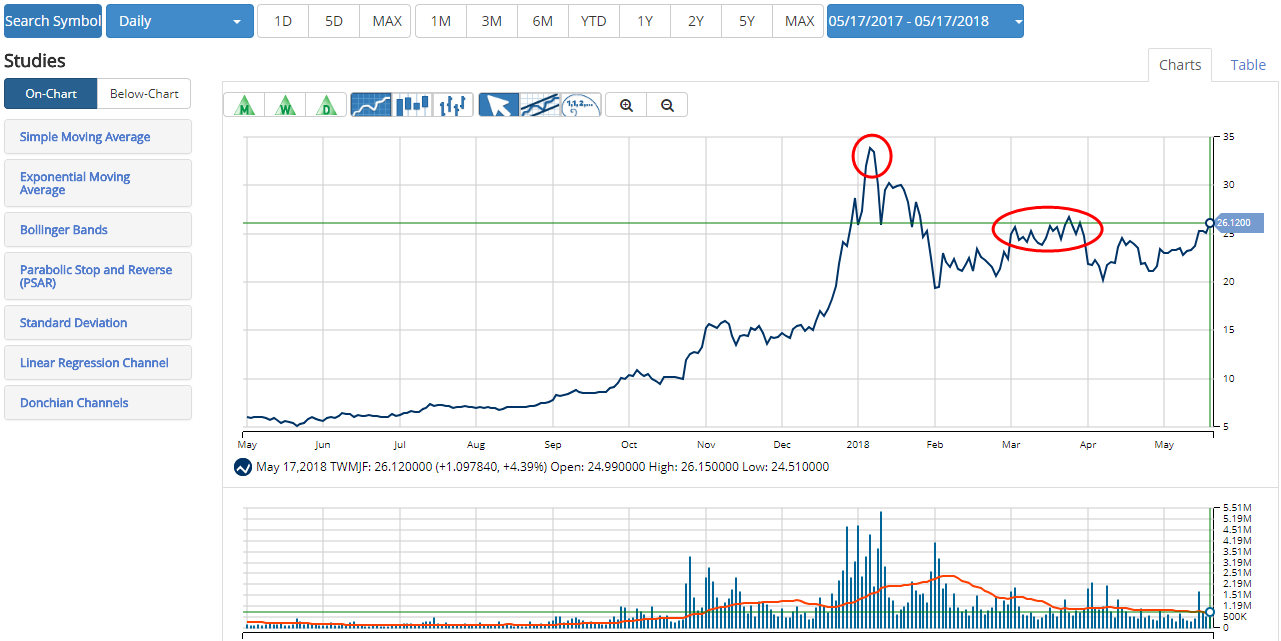 Looking forward – I am expecting more Canadian stocks to follow Canopy’s lead and pursuit listings on the NYSE.

Below I reveal three Canadian cannabis companies that I expect to apply for listings on large US stock exchanges such as the NYSE and the NASDAQ.

If that happens, just like Canopy, I am expecting shares to get a nice short-term jolt and gain long-term credibility.

Aurora Cannabis (ACBFF) is the second largest Canadian cannabis company and one of the largest in the world. Aurora has been on a buyout binge lately, buying multiple companies to help Aurora grow production as quickly as possible ahead of recreational going legal. Aurora is also building a massive cannabis greenhouse Called Aurora Sky. When completed Aurora Sky is set to be more than 1 million square feet.

Organigram Holdings, Inc. (OGRMF) is a mid-sized Canadian cannabis company with a niche in organic cannabis. Organigram is already delivering impressive sales growth. The company reported awesome second-quarter results in late April. Sales jumped 123% from last year to $3.2 million. Net income increased to $1.1 million from a loss of $5 million last year. Phase 3 expansion of its new greenhouse is expected to be complete for the start of filling of rooms with first cannabis plants by June 1, 2018, bringing Organigram’s pro-forma run-rate capacity to 36,000 kg per year. Organigram plans to launch its adult-recreational brand strategy on or about May 15, 2018. And finally, Organigram expects to announce one or more strategic or international investments in the upcoming quarter.

The Canadian cannabis industry faces a key vote on June 7 to finalize plans to legalize recreational cannabis. The bill is expected to pass – and set the stage for legalization – but the pending vote is driving some caution.

These three companies are early leaders in Canada’s high-growth cannabis industry. Each of them are great candidates to follow in Canopy’s footsteps and apply for an uplisting onto a major US stock exchange such as the NYSE or NASDAQ. If that happens, I expect shares to jump higher in the short run and get a long-term boost.