The September 2012 Euro Currency contract lows are trading along a lower trend line, touching at 1.2051 (7/24/12), 1.2140 (8/02/12), and 1.2258 (8/16/12). A close below the lower trend line will trigger a sell entry. It appears the market will need to settle at 1.2280 or lower for confirmation of a breakout. The Trend Seeker (a GBE trading tool) confirms the market is in a down trend. The 50 day moving average (1.2387) is just above recent highs which could act as resistance and a natural level for stop losses. A short term target could be the 1.2051 low from 7/24/12. The stochastic indicator crossed over to sell signal and MACD is converging. These indicators may fall in line once the breakout occurs. END_OF_DOCUMENT_TOKEN_TO_BE_REPLACED

Investors and traders have been arguing for the longest time about which overarching strategy is king: fundamental analysis or technical analysis. Long-term investors believe that technical analysis is trash and nothing more than lucky betting, while short-term traders think that fundamental aspects of companies and economies do not matter for short-term price movement. END_OF_DOCUMENT_TOKEN_TO_BE_REPLACED

Today I'd like to welcome Allan Harris from AllAllan.com. Over the past few months Allan's blog has become a daily reader for myself, along with many others in the office. His analysis and ability to read the markets is uncanny. Allan decided to do an experiment, on his own, following the Q's...I think you'll find the results VERY interesting. But be sure and visit Allan's website for more details.

There is no greater feeling as a trader then the feeling you get having successfully navigated an options trade in the QQQQ. This is how I do it, using Market Club Triangles.

I consider Market Club triangles as serving to alert me to breakouts in the underlying tradable, a 3-day breakout for daily charts, a 3-week breakout on the weekly charts. I only use weekly charts because there are less whipsaws and signals generated on weekly charts also serve to confirm an intermediate term trend is in place. Market Club does a great job of monitoring my portfolio as well as market indexes, etf’s and individual stocks for these 3-week breakouts.

Here is a Market Club chart for the QQQQ with the weekly Triangles going back about one year. Notice that there are whipsaws, but more importantly, note how many tradable trends are caught using the automated triangles:

Note that there were a total of eight signals for this 12-month period, about one signal every six weeks. There were 5 net winners and 3 net losing signals.

Using the Triangles returned about double the Sell & Hold strategy.

Using the Options made this whole exercise worthwhile, generating over 500% for those eight trades. 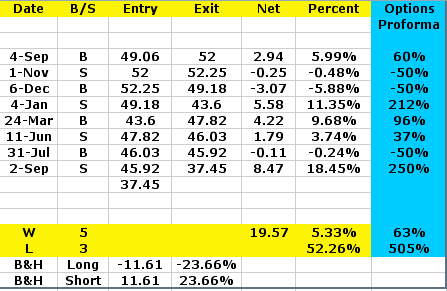 Winning 5 out of 8 trades is only a sampling error away from four out of eight wins, or a 50% win ratio. How does something so close to a 50% win/loss generate 500%?

This is an observation that a lot of wannabe traders miss: The magic here isn’t so much pinpoint market timing, it’s that age old trading rule of letting profits run and cutting losses combined with a decent market timing model.

In the case of the Q signals and returns, I’ve used a 50% stop loss rule, meaning all trades that fall 50% based on the underlying options are closed out. All trades that do not fall 50% are held until the next signal. That is why all of the losers are 50% (worst case basis) in the table of trades.

As for the winning trades, the returns above are based on a conservative assumption of losing one month of time premium for each trade and a beta of 60% for just-out-of-the-money calls and puts. Actual real money returns may be a little better or a little worse, but these assumptions capture a fair value for the strategy over the course of the past 12 months.

Finally, considering all of the angst in the market the past few months, look at how beautifully this strategy has bypassed all the fundamental and technical analysis out there and simply went short on September 2 and held short for the entire decline since then.

Consider the ease of trading like this, following the weekly triangles in and out of the Q’s and ask yourself, what other methodology would have navigated this market with as much success and as little sweat equity as the weekly Triangles?

Trading doesn’t have to be complicated, losing proposition. As I have shown, it can be both simple and rewarding.

Mechanical systems do have merit, but after ten years of trading in the cash and energy markets Michael became convinced that a discretionary approach was more suited to his personality and gave him more consistent profits. In this seminar, Michael describes every aspect of the discretionary methodology he developed for profiting from a short-term volatility breakout in futures and equities markets.

Michael also discusses the full anatomy of a trade including entries, exits, setting stops, account leverage, and money management. He presents actual trades in detail so that you gain a complete understanding of his pragmatic, winning methodology. This session provides you with an enhanced understanding of the markets, thereby improving profitability regardless of experience level or trading style.

Before Michael Mazur began trading in the futures industry in 1994, he spent ten years as an international cargo trader in the energy market. He traded for Mobil Oil, Mitsubishi, Salomon, and Vitol SA, and he managed trading personnel and a trading portfolio that reached from the Arabian Gulf through India to the Pacific Rim. His group sales ranged from $500 million to $1 billion annually. Michael lives in Pacific Grove, California, where he operates M.J. Mazur, Inc., a registered commodity trading advisor. Michael manages futures accounts, publishes M Trade, a daily trading sheet, and provides consulting services to institutions and independent investors.

Saturday Seminars are just a taste of the power of INO TV. The web's only online video and audio library for trading education. So watch four videos in our free version of INO TV click here.

For today's Guest Blog post, I've asked Harry Boxer to come and teach us a little bit about what makes a breakout a STRONG breakout...and MUCH more! Harry's been a contributor on CNBC, CBSMarketWatch, WinningonWallStreet, Stockhouse, DecisionPoint and more. If you're eager to learn more about Harry Boxer and his methods, check out TheTechTrader. Enjoy the post.

Breakouts of long bases on strong volume are frequent harbingers of continued price appreciation. Another harbinger, after the initial up-leg, is a low-volume, orderly pullback towards support.

An analysis of the Converted Organics (COIN) chart illustrates this strategy. As the daily chart indicates, COIN in October 2007 broke out of a base pattern that extended back since its IPO in late February. Some traders who missed entering early may have given up on the stock when it rose 50% from around 2 1/2 to 3 3/4, but a closer look at the chart shows why it had more room to move.

As a stock in a rising pattern pulls back, look for several factors to portend the continuation of the pattern.

1. First, look for very low volume on the pullback between 10% and 25% of the average volume of the last 90 days. Second, watch for the decline to flatten near the 21- or 40-day moving average on the hourly charts in a quiet, narrow flag-type formation.

2. When the breakout comes, buy on the initial thrust out of this flag pattern. This means a sudden dramatic change in price accompanied by heavy volume. The price doesn't necessarily have to rise above the top of the flagpole (i.e., the previous rally high prior to the consolidation), but only needs to be a price bar that is at least several times the size of the previous several bars on the chart.

4. Set a stop below the bottom of the lowest level reached during formation of the consolidation or flag pattern out of which it has broken. When COIN, for example, in its November upmove exceeded the top of its October flagpole around 3.75, that was one signal to get in or add to the position. Another signal came in the second week of January at around the 8 level, when we first highlighted it for our subscribers.

We saw COIN having consolidated and tested its 8.70 triple-top resistance over the previous 3-4 sessions, and noted that if it broke through that level it could initially head to 10 1/2-11, and then beyond that to our next target of 12 1/2-13, where it last resided, as mentioned, on January 15. The COIN example illustrates the potential that chart patterns like high-volume breakouts from long bases and low-volume flags can have in predicting price appreciation.

Harry Boxer is an award-winning, widely syndicated technical analyst and author of The Technical Trader, which features a real-time diary of Harry's minute-by-minute trades and market insights, plus annotated technical charts & stock picks, based on Harry's 35 years experience as a Wall Street technical analyst. You can find out more about Harry's work at TheTechTrader.com.