Everyone's bargain list just got a LOT longer. Energy stocks can finally stop feeling so lonely. They have plenty of company now.

If you've (hopefully) followed Adam Hewison's posts, he illustrated on Monday that it's not yet safe to start acting on your bargain list, as far as stocks are concerned. The broad-market long-term trade triangles are (obviously) flashing red right now, and Fibonacci indicators don't show support for this falling knife until much lower levels.

Adam specifically touched on crude oil in his Tuesday post, saying its RSI is very oversold and flat, and combined with a falling market, one would expect a bottoming out at some point. "Not to say it can't go lower," he added.

A brief look back

Remember $108 oil, back in the summer of 2014? WTI crude has already traded as low as $38.00 this week, and looks as though it's unlikely to return even to the $60s – in a sustained way – for perhaps many years. In fact, a dip into the $20s seems at least equally likely at this point, given the supply glut combined with the newfound volatility and fear across all markets.

So oil has shed about 65% so far, and has generally held below $60 for all but 14 days since falling below that level 9 months ago. And, of course, oil's plunge has taken the value of most oil companies with it. Feast your eyes: END_OF_DOCUMENT_TOKEN_TO_BE_REPLACED

Quick: Name as many energy stocks as you can that fit these criteria:

There aren't very many. A handful of NYSE-listed pipeline companies make the cut, including these: END_OF_DOCUMENT_TOKEN_TO_BE_REPLACED

I wrote about oil refiners – and the phenomenal performance of their stocks – on Monday. Today I'm writing about another energy sector that has been hot the last few weeks; namely, solar stocks.

FSLR's all-time high is over $300, back in the summer of 2008. The stock spent the rest of '08 crashing, but then stabilized until February 2011, when FSLR peaked around $175 before crashing all the way to $12 in May 2012 (see chart from Yahoo! Finance, below). From that low point, FSLR enjoyed a nice, even, steady uptrend for the next 2 years. On June 20, 2014, when oil peaked at just above $107/barrel, FSLR was trading around $70 per share. FSLR's $30 haircut from June 2014 – January 2015 almost perfectly coincided with oil's big decline. Solar investors, of course, understand that solar becomes a more attractive energy alternative when oil prices are high, and vice versa. END_OF_DOCUMENT_TOKEN_TO_BE_REPLACED

The Energy Report: As a retired sell-side analyst and hedge fund VP, what do you look for in selecting and analyzing investment situations?

Malcolm Shaw: My background is actually geology, but over time I got pulled into finance. There was an advantage to having geological or technical knowledge, particularly in evaluating small- and mid-cap companies. Technical knowledge aside, the key for me is good management, and I've met hundreds of management teams over the years. Good management with sector expertise is always my first screening tool. After that I like companies that are under covered or generally unloved by the street because they tend to be where the market is less efficient. I'm not really going to add any value talking about names like Exxon Mobil Corp. (XOM:NYSE) or Encana Corp. (ECA:TSX; ECA:NYSE) simply because the information is so well distributed and the market is more efficient in larger caps, but not in smaller caps. END_OF_DOCUMENT_TOKEN_TO_BE_REPLACED 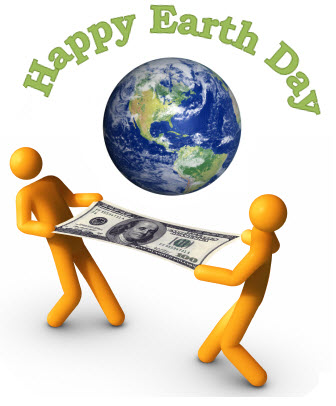 What better day to add a little more "green" to your portfolio than Earth Day? Today we've asked Tate Dwinnell from Green Stocks Central to let us in on a few top "green" bullish stocks and then analyzed them with our "Trade Triangle" technology:

These markets may be in some near-term weakness, but are still in a long-term upward trend with intermediate and longer-term trends pointing to a bull market, but short-term and intraday term and point to a bearish movement.