Hello traders everywhere. The indexes are ending the week on a soft note after reaching records highs earlier in the week. This is primarily due to General Electric Company (NYSE:GE) falling more than 4% to a 19-month low.

Meanwhile, the euro climbed to its strongest level against the dollar since January of 2015 after ECB President Mario Draghi said that the ECB would discuss plans to unwind quantitative easing this fall. 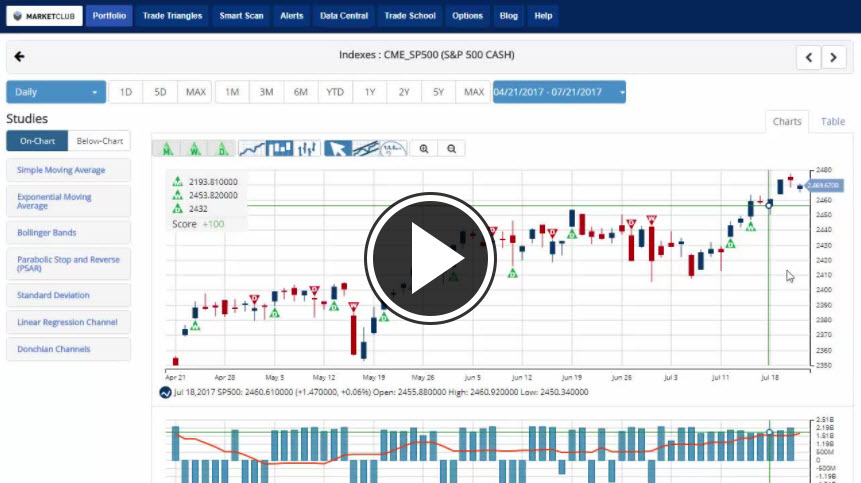 Hello traders everywhere. The stock markets opened little unchanged for on Monday holding just above the record levels set on Friday. The reason for the slow start? Earnings. That's right, it's earnings season and we're kicking off a big week of earnings with Netflix Inc. (NASDAQ:NFLX), which reports after the close today. 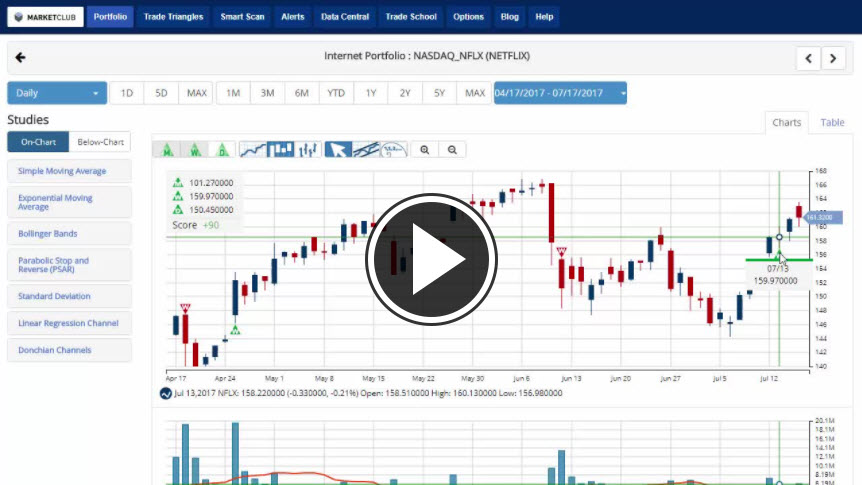 If you're looking for a place to find a full listing of earnings dates look no further. I use Yahoo! Finance's earnings calendar.

Hello MarketClub members everywhere. The indexes are looking and pacing to snap a 3-day losing streak today with the big 3 all being in the green. This move comes on the heels of a relatively quiet holiday weekend where fears of geopolitical upheaval that never came to fruition.

Traders have turned their attention to a slew of corporate earnings this week, led off by Netflix and of course United Airlines, who both report after the close today. 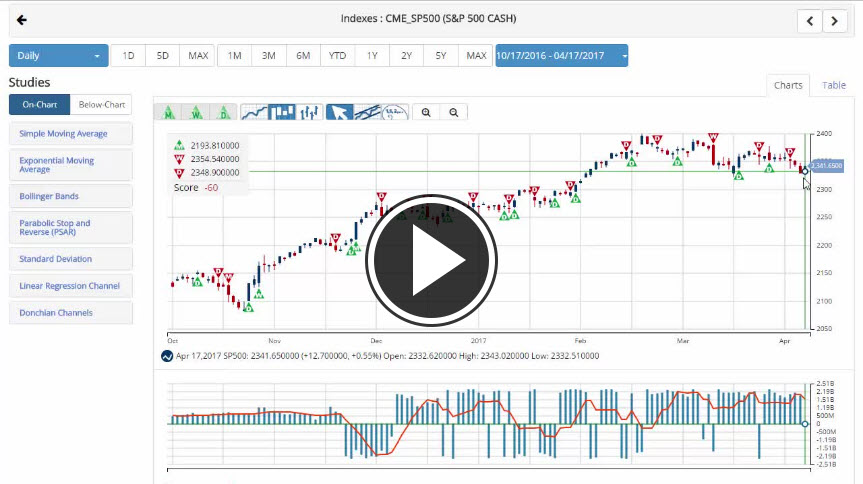 Netflix Inc. (NASDAQ:NFLX) is expected to report earnings of .37 EPS according to analysts. That would be more than a 38% increase compared with the .6 ESP Netflix reported during the same quarter a year ago.

Analysts expect United Continental Holdings Inc. (NYSE:UAL) earnings per share to drop 69% to .38 EPS, this decline is a reflection of higher fuel costs. Revenue is expected to increase 2% to $8.379 billion.

I’ve written many articles highlighting the advantages options trading and how this technique, when deployed in opportunistic or conservative scenarios may augment overall portfolio returns while mitigating risk in a meaningful manner. Timing the market has proven to be very difficult if not altogether impossible. However creating opportunities to lock-in the downward movement in a given stock one is looking to own is possible. If a stock of interest has substantially fallen to near a 52-week low, then one has an option to “buy” the stock at an even lower price at a later date while collecting premium income in the process. Alternatively, it's also possible to make money on the option itself without owning any shares of the company via realizing options premium gains as the underlying stock appreciates in value off its lows. This is called a covered or secured put option, covered in the sense that one has cash to back the option contract. Leveraging covered or secured put options in opportunistic scenarios may augment overall portfolio returns while mitigating risk when looking to initiate a future position in an individual stock or looking to make money on the potential appreciation without owning the stock. In the event of a covered put, this is accomplished by leveraging the cash one currently has by selling a put contract against those funds for a premium. Why buy a stock now when you can purchase the stock in the future at a lower price while being paid to do so? Why buy stocks at all when you can make money on the underlying volatility without ever owning the shares? END_OF_DOCUMENT_TOKEN_TO_BE_REPLACED

Netflix Inc. (NASDAQ:NFLX) recently reported stellar quarterly numbers alongside robust subscriber growth that propelled the shares from ~$100 to $120 by the next day and ultimately to $130 within a few days (Figure 1). Netflix announced that it brought in 370 thousand net subscribers in the U.S. during Q3 while posting only 160 thousand net subscribers during the previous quarter. Furthermore, its international strength was very robust, adding 3.2 million against a 2.0 million consensus. Netflix’s guidance was higher than most estimates as well coming in 520 thousand and 3.75 million subscribers domestically and internationally, respectively. I’ve written a series of articles highlighting ways to leverage options trading to augment a long position or potentially entering into a position in Netflix. I’ve highlighted ways in which one can layer in covered calls to mitigate risk in a long position as well as utilizing secured puts to enter into a position at a lower price or avoid owning the stock altogether while making money. I’ll discuss my covered call/secured put combination strategy to unlock additional value, mitigate risk and generate income. I’ll break this strategy out into segments to exemplify the power of options when dealing with an intrinsically volatile stock with significant upside potential such as Netflix. In brief, I’ve realized a 13.2% gain relative to a -3.1% loss based on the traditional buy and hold strategy based on the closing price on 11Nov16 of ~$115. 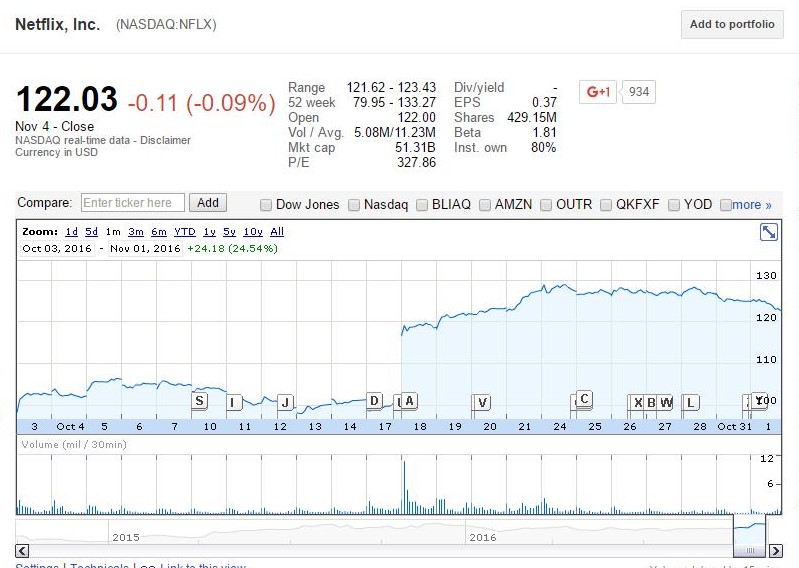 Netflix is a highly volatile stock with a 52-week range of $80-$133 per share or a $53 per share range. Layered within that range are swings of $10 per share or more (~10%) throughout the course of any given day. These swings to the upside or downside can be difficult to stomach especially after the most recent earnings announcement where the stock cratered by $15 per share in one day (~$100 to $85). There’s no disputing the fact that Netflix has an outrageous valuation and a wide range of intrinsic volatility. Case in point, a $20 move per share was witnessed the day after Netflix beat expectations when they announced Q3 numbers. This intrinsic volatility is more pronounced during any major news story (i.e. expansion into international markets or subscriber price increases) and specifically around earnings announcements. As a result of the nosebleed valuation and volatility, in my opinion, options are a great companion when committing capital to Netflix stock. END_OF_DOCUMENT_TOKEN_TO_BE_REPLACED