The next OPEC meetings are scheduled for early December. At issue is how they will deal with the outlook for the reduced demand for OPEC oil in 2020.

“The OPEC+ group of oil producers will need to make deeper output cuts when they meet in December. That’s the inescapable conclusion from the latest round of monthly reports published by the three big oil-forecasting agencies.” 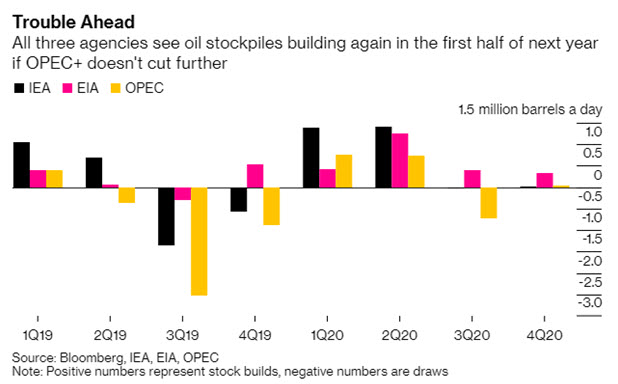 According to Reuters reporting, “Saudi Arabia, OPEC’s de facto leader, wants to focus first on boosting adherence to the group’s production-reduction pact with Russia and other non-members, an alliance known as OPEC+, before committing to more cuts, the sources said…A second OPEC source said: “Of course deeper cuts are an option, but some things should happen before that. The rest of the OPEC+ countries will not cut deeply if Iraq and Nigeria don’t comply 100%.”

OPEC released a table in January showing the “Voluntary Adjustment” to “Reference Production,” which result in the “Voluntary Production Level” for the OPEC and non-OPEC participants. Libya, Iran, and Venezuela were exempted. 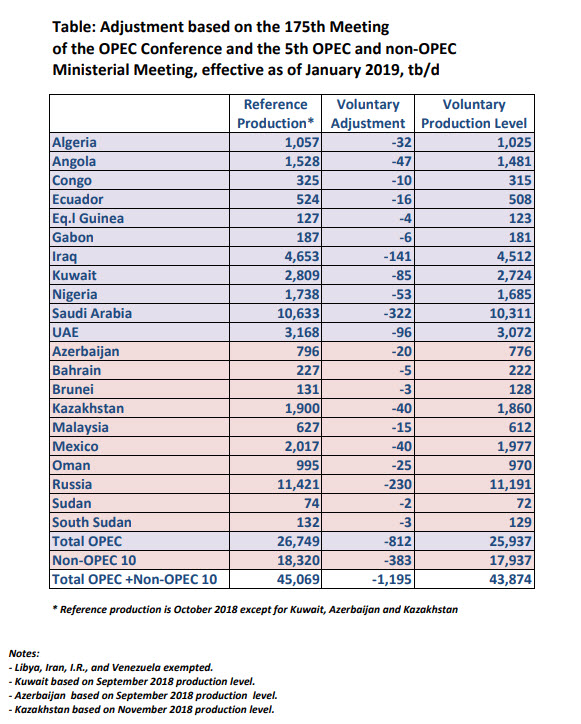 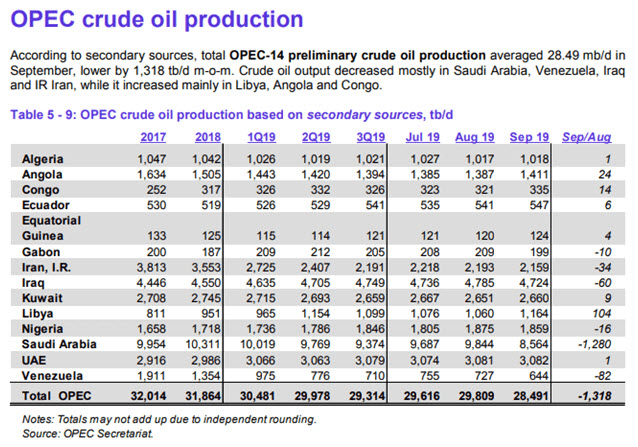 Saudi Arabia has been willing to cut that much below its target. So the key for them is getting the biggest over-producers to comply, which is Nigeria, Iraq, and Russia.

However, there may be a bigger problem brewing for the future. Kyari said that Nigeria hoped to raise oil production to about 3 million bpd in the next 2 to 3 years.

Iraq will be fully compliant by October with agreed oil output cuts under an OPEC-led supply deal, and Baghdad’s reduction will amount to 175,000 barrels per day (bpd), Oil Minister Thamer Ghadhban said.

According to numbers reported by the Joint Organizations Data Initiative (JODI), Russian production in August was only 86,000 b/d lower than last October, the reference month. The country had promised to cut its output by 230,000 b/d. 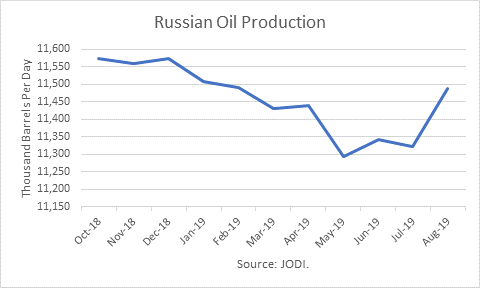 Thanks to the effects of sanctions on Iran and Venezuela, OPEC’s production cuts are far greater than had been planned. And so the task of lowering production to meet demand in 2020 is doable, assuming those overproducing actually do comply, and Saudi Arabia is willing to keep underproducing.

However, the opposite side of the coin is the risk that U.S. sanctions on Iran will be lifted prior to the U.S. presidential election next year. If they are, OPEC will have upwards of another 1.7 million barrels to cut to make room for Iran, and that would be very challenging, at best.

Iraq is OPEC’s second-largest producer, and its production in August was 4.88 million barrels per day, according to Platts, and 4.76 according to Reuters. Its production target is 4.512, and so it is producing around 220,000 b/d more than it had pledged.

By contrast, Iran’s production has fallen by 1.6 million per day since the October 2016 base period, and Saudi Arabia cut its output by 920,000 b/d. Moreover, according to Majid Jafar, CEO of Crescent Petroleum, the largest private oil company in the region, it is “doubling down” on its investment in Iraq and intends to increase its production there. END_OF_DOCUMENT_TOKEN_TO_BE_REPLACED

In early July, OPEC+ rolled-over its December 2018 agreement for another nine months ending March 2020. To get an idea of compliance with that agreement to-date, I compared changes in production from October 2018 (the base period) and June 2019, except for Russia, May 2019 due to a lack of data for June.

I found that OPEC delivered a cut of 2.46 million barrels per day, of 8%. That is more than three times its pledge of 800,000 b/d. The primary reason for such a large cut was sanctions on Iran and Venezuela.

Iran reduced its reported output by 1.3 million barrels per day or 38%. Venezuela reduced its output by 600,000 b/d, or 46%. It’s important to understand that both of those cuts were involuntary. 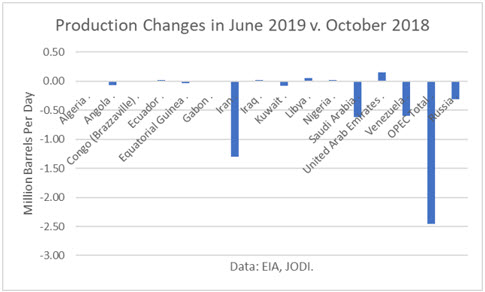 Note: Russia’s change is until May 2019. END_OF_DOCUMENT_TOKEN_TO_BE_REPLACED

Last year, while we Americans were busy overindulging on turkey and all the fixings, OPEC ministers pulled a fast one on us. While we innocently watched football and took naps, the price of WTI crude plummeted from $74 to $68 in response to OPEC’s announcement it would leave its oil production target unchanged at 30 million barrels per day (mb/d).

Until that weekend, oil in the $60s or $70s seemed unsustainably low.

Of course, even before OPEC’s big Turkey Day declaration, oil had already fallen about 30% from its June highs of $107, due to burgeoning supplies. But the summer swoon turned out to be just the warmup for the rest of oil’s big 17-month collapse (so far). OPEC’s Thanksgiving 2014 meeting sent prices reeling and continued pressures have kept crude near its lows (around $40) even today. END_OF_DOCUMENT_TOKEN_TO_BE_REPLACED

By: Joseph Hogue of Street Authority

In his six years in office, President Obama has stressed his support for strict environmental regulation. He has expanded powers for the Environmental Protection Agency and has repeatedly deferred approval for the Keystone XL Pipeline System.

One key stat: The number of oil and gas leases approved during the first three years fell by more than 40%, compared to the final three years of President Bush’s administration. Drilling permit approvals on federal lands fell by a similar amount.

In addition to the regulatory headwind, falling oil prices are also impeding drilling permit activity. Against this one-two punch, some analysts are questioning the emergent theme of U.S. energy independence and shale production.

But is an unlikely supporter about to throw the sector a lifeline? END_OF_DOCUMENT_TOKEN_TO_BE_REPLACED