Third, they didn’t take into account their own vulnerabilities. Sure, their national oil companies have low production costs but their oil revenues largely support the national budgets. They need high oil prices to balance their budgets, effectively making them high-cost producers (e.g., KSA about $65/b in 2017). END_OF_DOCUMENT_TOKEN_TO_BE_REPLACED

The historical stock build from December 2014 through July 2016, and subsequent decline from August through December has led some to conclude that global stocks had started to rebalance. Instead, the normal seasonality in stocks had been masked by the high overproduction of OPEC, but then normal seasonality kicked-in.

Global OECD inventories from past years demonstrate the normal seasonal patterns, with some variability. As shown in the graph below, stocks normal build early in the year and peak around August. Stocks normally drop from September through December. 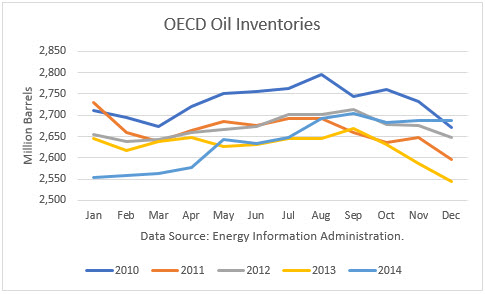 But in 2015, the oversupply was so excessive that stock just kept building through the year. They finally peaked in July 2016, then dropped off due to normal seasonal demand. This normal pattern led to a false conclusion that the rebalancing of stocks had begun. END_OF_DOCUMENT_TOKEN_TO_BE_REPLACED

Crude oil was the worst-performing asset in the first quarter of 2017, losing 5.9 percent. That period coincided with the first three months of the OPEC-non-OPEC production cutbacks, which were intended to reduce global inventories and support oil prices.

Instead, global stocks increased from end-December through February. And U.S. crude stocks built by a staggering 57 million barrels through March. In addition, based on the Energy Department’s weekly data, U.S. crude production rose by 429,000 b/d from end-December through end-March. The Saudi Energy Minister, Khalid Al-Falih, had said during the OPEC press conference on December 10th that he did not expect any increase in U.S. production for all of 2017. 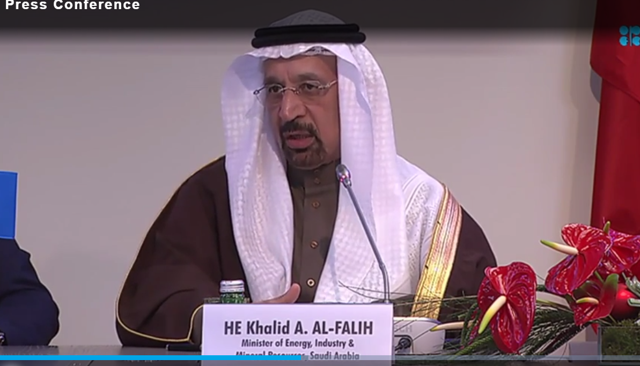 Saudi Arabia claimed to cut its production effective January 1st, but crude imports from KSA to the U.S. soared until the final week of March. In the YTD through March 24th, imports were up by 17% from the same period in 2016, and by 30% from December. END_OF_DOCUMENT_TOKEN_TO_BE_REPLACED

The stated objective of the OPEC production cut is to reduce OECD global inventories back to their five-year average. The U.S. has the largest excess inventories of any OECD country, and also publishes the most transparent, timely data, and so I had expected OPEC to target reductions in its exports to the U.S.

But based on Energy Department statistics for the weeks ending March 24, 2017, U.S. crude imports from Saudi Arabia averaged about 1.240 million barrels per day in the year-to-date. Saudi Arabia is the second largest source of imports behind Canada. That figure was about 30% higher than in the same weeks last year, and about 17% higher than during December, before its production cuts went into effect. 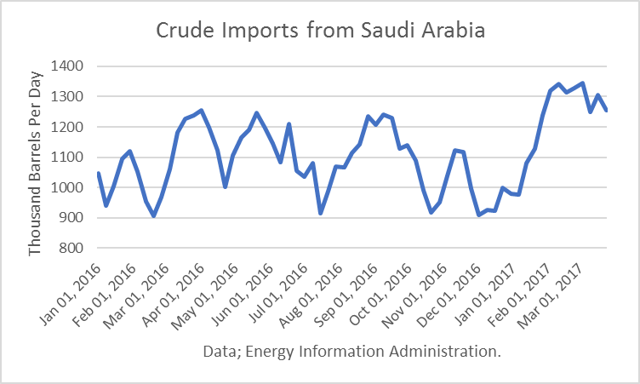 The Saudi energy minister claimed in December that he was reducing tanker nominations effective January 1, 2017, Saudi exports to the U.S. are 178,000 b/d higher than a year ago. Based on the import numbers for the 12 weeks off 2017, there is no evidence of any Saudi production cut. END_OF_DOCUMENT_TOKEN_TO_BE_REPLACED