Here we are! The experiment came to its final stage - the summary. Almost eight months ago we put two completely different instruments on the starting line in an exciting competition, which should have proved or refuted the assumption of the ‘pendulum effect’. The Japanese Nikkei index was a top performing instrument in November 2015 with +13% gains while Palladium was the top losing metal with -24% losses.

Chart 1. Voting results November 2015: The Majority Bet On The Success Of The Experiment!

Above is the screenshot of the ballot results for the experiment. Most of you bet on Palladium winning, which means the success of the experiment, and you were absolutely right dear readers!!! Congratulations! And thank you for the support of the experiment! See the chart below for the confirmation.

It’s a signal victory! Both instruments are on the opposite sides of the equilibrium (zero point). Palladium has scored +3.5% for the period while the Nikkei has lost more than 20% of its value. It’s amazing that the maximum divergence for the period was achieved right at the end of the experiment! The gap has scored an awesome 24%! The experiment showed the first positive result.

This outcome wasn’t obvious at all at the start. I am sure all of you have heard the following expressions: ‘The future is hidden from us,' "The historical performance doesn’t guarantee the future gains" etc. And you can see that those sayings are based on the outcomes from these type of experiments/observations. And now you can understand the existence of cycles/waves/fractals/hexagon and other theories and principles, which use such a type of assumptions implemented in this experiment. I guess the pendulum principle is the simplest of them. 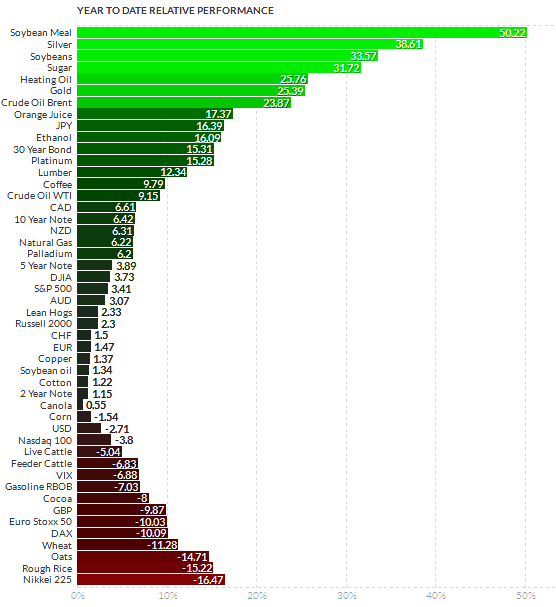 Unlike in the last year, we can see that there is a majority of gainers this half of the year. Another observation is that the Nikkei lost not only to Palladium but all the rest of the futures leading the losers’ pack. And among the top gainers, we can find the metal now – silver won the second place with +39% gains. Some power aka ‘Invisible Hand of the Market flipped the side for the futures’ performance.

Silver is in a bullish mode and is close to hitting the target at $20 set in my earlier post. Below is a separate chart of the Nikkei index to look for opportunities before you can vote at the end of the post for one of these futures.

The index tried two times below the ¥15000 level during the first half of 2016 but failed. There are three supports at the same level, which can hold the price fall: The 2014 consolidation level, 50% Fibonacci retracement area and the downtrend support.

If we take the midline (red dotted line) of the downtrend as the first resistance, then the current range is ¥14500-16500 for the Nikkei. The index is within a red downtrend, and it would be broken only above the ¥18300 level, which is ¥2700 away from the current price. The picture is mixed as short-term opportunities favor longs while the medium-term trend remains bearish. I guess this time it would be difficult for you to choose in favor of the Pendulum effect beneficiary (Nikkei) as we put together one of the favorite metals versus the weak stock index.

Ok, I am pushing the Pendulum for a new six months as an experiment for the sake of knowledge, and I need your opinion: