Since the start of 2017, the Nikkei 225 has lagged in performance; with a 2.8% return since 2017 began, it lagged the S&P 500'S 2.8% RETURN, and it lagged its Asian peers, the Hang Sang and the South Korean KOSPI, which gained 16% and 16.7%, respectively, year to date. Despite all that lagging, however, the future trend for the Nikkei 225 might be the most promising. The reason? The BoJ’s monetary policy, and how it is trailing the performance of the Japanese economy.

In a recent speech at the University of Oxford, Bank of Japan Governor Haruhiko Kuroda stressed that, despite the latest improvement in Japan’s economic performance, inflation (the rise in prices) is still far from the BoJ’s target of 2%. As the official statistic released from Japan’s statistic Bureau suggests, Kuroda is right. Japan’s headline inflation hit 0.4%, still persistently close to 0%. Add to that the risk of another sell-off in oil and the downside risk for Japanese inflation seems very present. Together, that makes it incumbent upon the Bank of Japan to keep its ultra-loose policy. Nonetheless, something about Japan’s official data doesn't add up. END_OF_DOCUMENT_TOKEN_TO_BE_REPLACED

This is the summary of the second experiment that I started in the middle of 2016 where we put the ultimate loser – the stock index of struggling Japanese economy against the top gaining favorite metal – silver.

Chart 1. Voting results July 2016: The Majority Bet Against The Success Of Experiment!

Above is the result of the voting for these totally different instruments from 6 months ago. This time, congratulations are only to me as an experimenter as I voted for the Nikkei (every time I vote for experiment success, not for an individual instrument) and to another single person (total two votes for the Nikkei), who went against the majority. If you are reading this post please write your name in the comment, let the community meet you.

I think, this time, the majority was ultra-biased and bet on silver. I am afraid to imagine what would be the voting results if gold was the among bets 🙂 Previously, the votes split almost even with a minimal advantage in favor of palladium.

I think we witnessed the maximum divergence at 22% between these two instruments when I posted a snapshot of the experiment last October. But the final outcome is just astonishing! The Nikkei hit above the +20% handle while the silver also hit the 20% mark but with a minus sign. It is easy to calculate that the divergence peaked above the 40% mark. It means that for the past half year those who sold the silver and bought the Nikkei could book more than 40% of the trade in 6 months.

This is the second straight success of an experiment! I think it was lucky to choose that very period of 6 months for an experiment during which the Pendulum Effect of the market has enough time to take action. And another amazing regularity, which is clearly seen on the chart: the maximum divergence of instruments at the end of an experiment.

Let’s push the Pendulum again to have more records for more reliability. 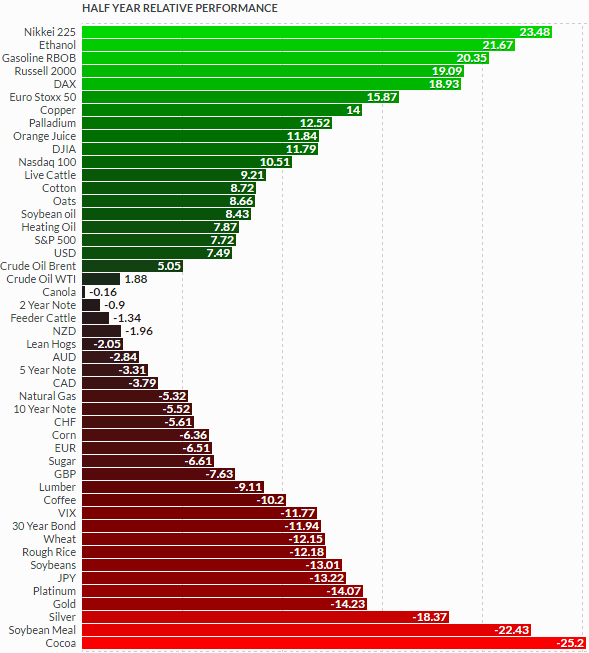 It looks like the Nikkei is the futures’ superstar for the past half year as it beat not only silver, but all the rest of the futures and topped the ranking. It transformed from the “complete non-entity” into a “superhero” just in 6 months amid the Bank of Japan’s asset purchases.

Silver finished 3rd from the end of the list and showed the worst performance among metals in the second half of 2016.

It is ridiculous, but we should put them against each other again in a new Pendulum experiment. Please vote at the end of the post for one of these instruments to show me your preference.
I already posted the fresh silver chart last month and this time I will update the Nikkei chart which was posted last October. 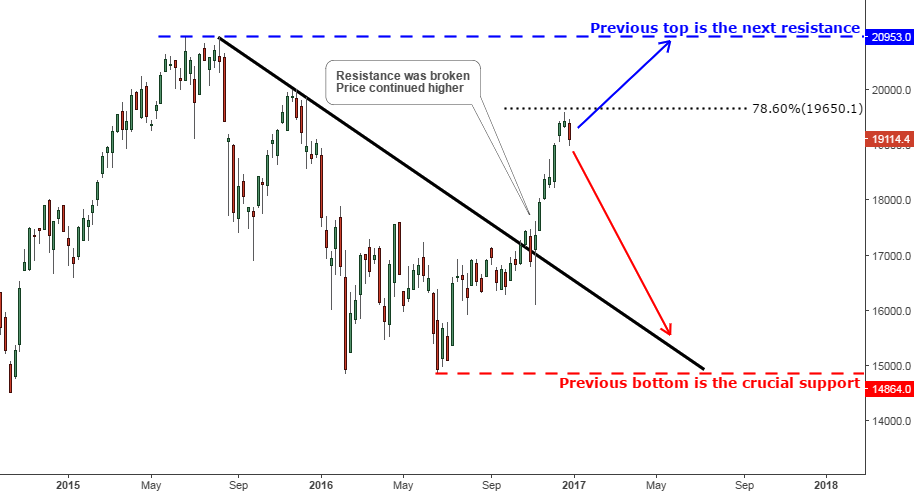 The Nikkei index is in the giant range set by the 2015 top at ¥20953 and the 2016 bottom at ¥14864. This instrument is very good for positioning as it moves actively like a shark, which needs to move steadily to breathe and stay alive.

Last October we witnessed a breakup of the resistance (black), after that we can see that the price continued higher in the direction of the break. Price rocketed ¥17k to ¥19k level, but then it stalled ahead of 78.6% Fibonacci retracement level set at ¥19650 mark. The index has lost more than a half thousand already after reversal. This setback can start another drop down to the broken resistance at least or even lower to the range’s bottom highlighted in-dash red horizontal line. The break above the 78.6% Fibonacci level opens the way to the previous top at ¥20953.The risk/reward ratio favors short entry as resistance is closer than the support.

At the start of July, I reviewed the result of the first Pendulum experiment where the loser metal Palladium could beat the supercharged Japanese Nikkei stock index. The same day at the end of the post I proposed to push the Pendulum again. This time we entered into competition the faded Nikkei index versus the matchless metal silver. Below is the graph of the bets you placed.

This vote clearly shows the biases of the readers as in the second experiment like in a first one the odds were in favor of the metal, at the first time it was palladium and this time it was silver. Only one person added to my voice in favor of the Nikkei as I am acting as an experimenter and chose the success of the Pendulum effect betting on the stock index to break the shutout.

Well, you will be surprised looking at the chart below as the majority’s bet is wrong so far. END_OF_DOCUMENT_TOKEN_TO_BE_REPLACED

Here we are! The experiment came to its final stage - the summary. Almost eight months ago we put two completely different instruments on the starting line in an exciting competition, which should have proved or refuted the assumption of the ‘pendulum effect’. The Japanese Nikkei index was a top performing instrument in November 2015 with +13% gains while Palladium was the top losing metal with -24% losses.

Chart 1. Voting results November 2015: The Majority Bet On The Success Of The Experiment!

Above is the screenshot of the ballot results for the experiment. Most of you bet on Palladium winning, which means the success of the experiment, and you were absolutely right dear readers!!! Congratulations! And thank you for the support of the experiment! See the chart below for the confirmation. END_OF_DOCUMENT_TOKEN_TO_BE_REPLACED

Last November I brought an experiment to your attention based purely on the laws of physics. I called it the "Pendulum experiment." The idea of it was to pick the strongest and the weakest asset by performance in 2015 and to check if they will move back like a pendulum and exchange their performance position relative to each other – the weakest will become stronger, the strongest will become weaker.

Just to refresh your memory: the Nikkei index was the top performer and Palladium was the weakest metal (YTD November 2015). I want to express my gratitude for the active participation in voting; the results are in the graph below.

The odds were in favor of Palladium with a margin of 5 votes (8%). It was almost a split even bet and we have another couple of months to see the final results. Now let us check the current progress of the assets as we passed the halftime period. END_OF_DOCUMENT_TOKEN_TO_BE_REPLACED