How did you do the second quarter? Did you make money or did you lose money?

Well, I'm happy to report that the Internet Portfolio put in a very good performance in a very flat market. The portfolio showed a return of 5.67% which I think you'll agree is an excellent return for Q2.

The Internet Portfolio is comprised of the following five stocks: END_OF_DOCUMENT_TOKEN_TO_BE_REPLACED

Let me begin by acknowledging the Chinese New Year. You might ask yourself, "What does that have to do with the markets here in the US?" My answer to you would be everything. Remember how influenced we were with the slowdown in China last year? This slowdown could be exacerbated in 2016, putting even more pressure on our markets here.

2016 represents the year of the "Red Monkey" on the Chinese calendar and it does not auger well for stocks according to "The Business Times" of Singapore.

Here's what they say:

"Do not expect the Year of the Monkey to be easy for investments. You need to outsmart the monkey to do well in the lunar year 2016. Do expect world events impacting stock markets and investments to change sharply and quickly, like the agile monkey."

"Expect markets to be volatile in the first half of the year (we've already got that) and for events to unfold quickly," their Chinese astrology expert says.

"The Year of the Monkey is going to shake, rattle and roil financial markets. One has to be as intelligent, witty and nimble as the monkey to do well in such investment landscape," he writes.

The most-recent Monkey year was 2004. In that year, the Shanghai Composite climbed 36% only to come crashing down in a 44% correction that bottomed in June 2005 (and then rallied 500%).

MarketClub translation - be nimble in 2016. END_OF_DOCUMENT_TOKEN_TO_BE_REPLACED

It has been a great week with some strong trades happening. One of those stocks has to be LinkedIn Corporation (NYSE:LNKD), the professional social media site that recently updated its website with a redesign. After the bell yesterday, LinkedIn announced its earnings and future outlook. Upon seeing the numbers, investors bolted to the escape doors as LinkedIn clearly missed its target and future outlook.

Did this come as a big surprise to us at MarketClub? The answer, in all honesty, is no as all of the Trade Triangles were negative indicating a lower trend for LinkedIn. 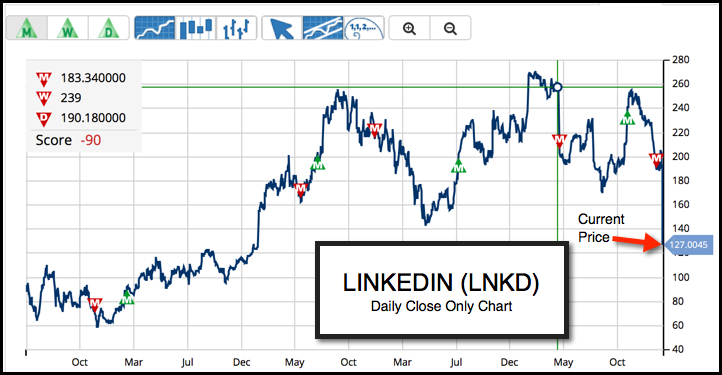 It is hard to ignore the power of the Trade Triangles during earnings season. END_OF_DOCUMENT_TOKEN_TO_BE_REPLACED

When I was combing through the recent Trade Triangles scan this morning, two stocks jumped out at me. These two stocks have been in disfavor with investors and were generally cast aside by the general public. 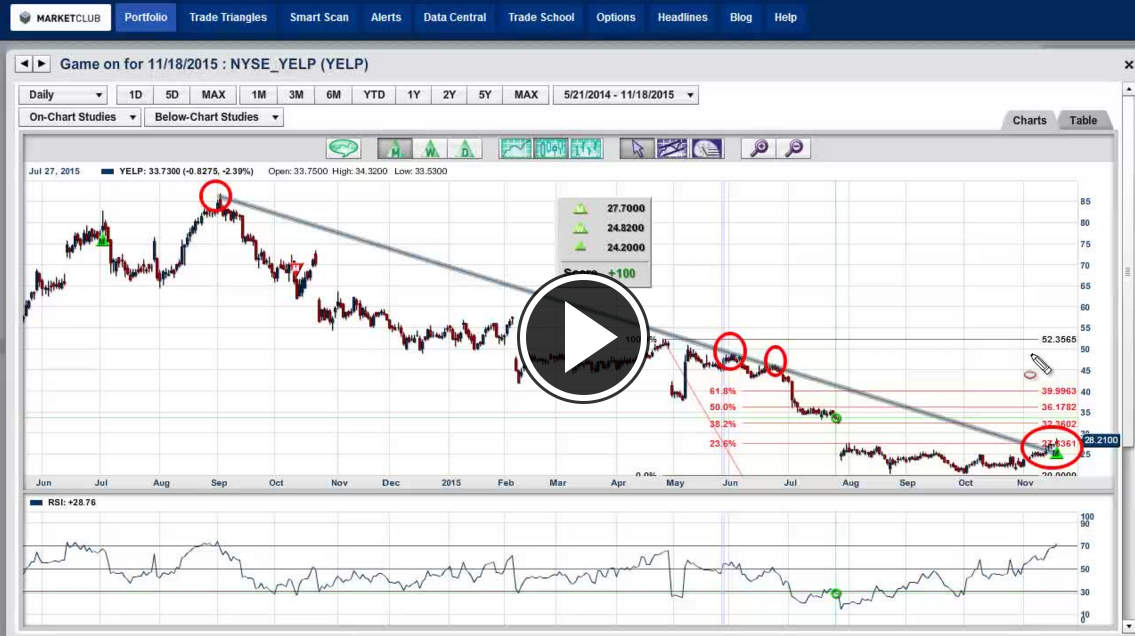 The first stock I will be looking at today is Yelp, Inc. (NYSE:YELP). This stock traded over the $100 level back in the first quarter of 2014. Since that time the stock has generally eroded and recently traded down to the $20 area. This morning, Yelp triggered a buy signal with a green monthly Trade Triangle at $27.70. This signal represents the first monthly signal since 10/13/2014 when a red monthly Trade Triangle was triggered at $64.70. I have an upside target for Yelp of $40, which represents a 61.8% Fibonacci retracement. END_OF_DOCUMENT_TOKEN_TO_BE_REPLACED

Hello MarketClub members and traders everywhere. I thought today I would take a look at the Internet portfolio to see exactly how it is positioned in the following Internet stocks. This particular portfolio has shown returns of 65% in 2013, the first year we began tracking this portfolio, to a return of 16.4% last year. 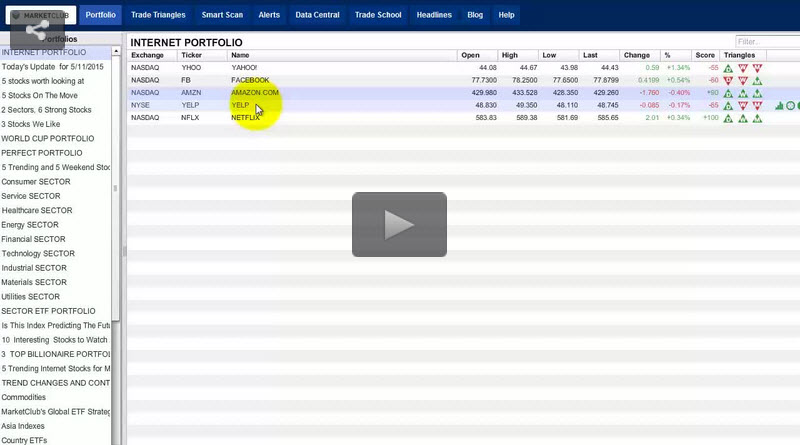 The portfolio consists of only five stocks and is very easy to follow. Now, I understand that there are a lot more popular Internet stocks out there which we don't track in this portfolio, but these are the five stocks I believe will have big moves. As long as the stock moves up or down, you should be making money with this portfolio.

Here are the five stocks that we follow: END_OF_DOCUMENT_TOKEN_TO_BE_REPLACED