Silver has failed to complete the second leg up as it couldn’t break above the August top of $15. It is interesting that this misbehavior of the white metal didn’t surprise you as the majority of you had bet last week that silver would fail and drop below $14.2. It’s impressive how accurate your forecast was!

In this post, I would like to update downside targets as we should be prepared for the resumption of the drop in metals after pullbacks have been finished.

Last week I reminded you of the big range of trade, which requires the retest of the downside of the range to complete the setup.

In this post, I highlighted for you a famous Bear Flag pattern (orange), which is yet to be confirmed. The break below the downside of the flag ($1190) is pending to complete the pattern. The first red down arrow represents the Flag Pole, which is crucial to calculate the target of the pattern. Another red down arrow shows the path to the target.

There are two interesting things about this pattern. Firstly, the target implies the breakdown of the range’s trough of $1122. Secondly, the target coincides amazingly with the major low of $1046, which was established three years ago in December of 2015. Again and again, we see the magic of math that frequently appears on the charts. Let’s see, which model would play out in the market.

Silver looks like a younger sister, who lacks parents’ love in favor of elder sister Goldie. It lacks investors’ support, therefore, it couldn’t perform the same size of the pullback as gold did and the subsequent drop was just horrific. The price closed only 20 cents away from the September low as one single weekly candle erased almost all gains established in the past two months. Indeed, there is a falling silver knife.

This is an update of the chart I posted this past May. The main concept is still valid, and the AB segment remained unchanged. The triangular consolidation has extended its width, and that caused the change of the angle of the downtrend channel (orange) to cover the top established this June, which is now a lower point for the start of CD segment. This amendment has moved the target of D point also lower from $12.3 down to $11.7. The new target is far below the major low of $13.6.

Before you bet on the silver’s bottom, I would like to share with you one more chart of the gold/silver ratio as it can expand your current view. 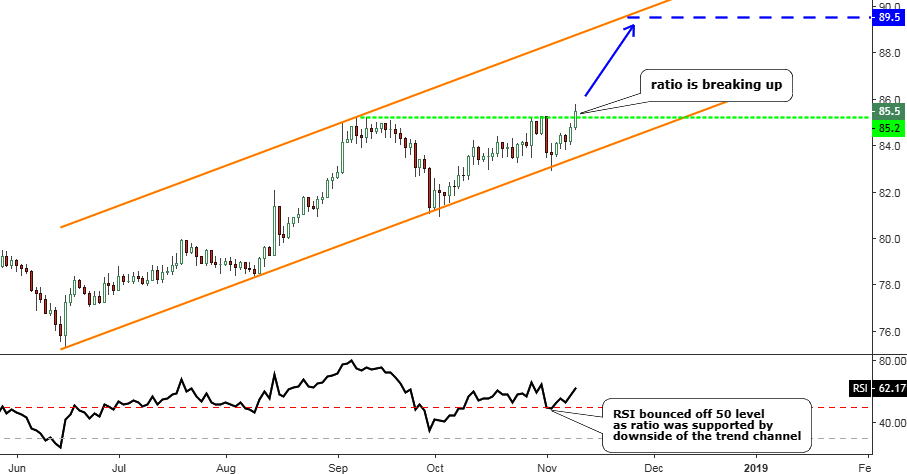 The ratio is rising for the second year in a row with small consolidations in between. The angle of growth turned even steeper than in a previous year. The orange uptrend’s downside was tested several times this year but kept intact. The last attack down was conducted at the beginning of this month, and we can see that both price and the RSI on the sub-chart bounced off the support to keep the gold’s dominance.

The ratio finally broke above the green horizontal resistance of 85.2 troy oz. last Friday and closed at 85.5 troy oz. The target is located at the top of the channel of 89.5 troy oz. And now let’s use this target level to check where the silver could drop if gold hits the Bear Flag’s target of $1046. If we divide 1046 into 89.5, we will get $11.7 for silver, and it’s a target for the CD segment. Simple math, but it’s incredible!

Last time the bets were split evenly between the two metals.