Welcome to the first day of trading in February. If it is anything like January, it's going to be quite a month.

After the close today, Alphabet, Inc. (NASDAQ:GOOG) will announce its earnings. If it is a blowout and Google surges $25, it will then become the most valuable company in the world - not bad for a company that was founded on September 4, 1998 and has only been around for 17 years. It took Apple, Inc. (NASDAQ:AAPL) which was founded April 1, 1976, almost 40 years to become the world’s most valuable company.

Today, Google flashed a buy signal putting both the monthly and weekly Trade Triangles in unison. That indicates there are good odds that Google will beat its earnings estimates after the close. There are no guarantees, but the odds would favor being long Google before the close.

Let's take a look at the rest of the markets which are not having such a good time of it. The dramatic rally on the last day of trading in January was more a function of short covering than anything else. Most stocks and indices are in a longer-term bearish trend based on MarketClub's Trade Triangle technology. END_OF_DOCUMENT_TOKEN_TO_BE_REPLACED

It's hard to believe that we just have one more trading day in January, which has been an extraordinarily volatile month and one that will certainly go down in the history books.

Many of the well-known large stocks are now in downtrends and are not likely to have major turnarounds anytime soon. One has to remember that the stock market looks six months ahead. While many of the companies are perhaps enjoying some good earnings, this may be the last good earnings season we see for some time to come. 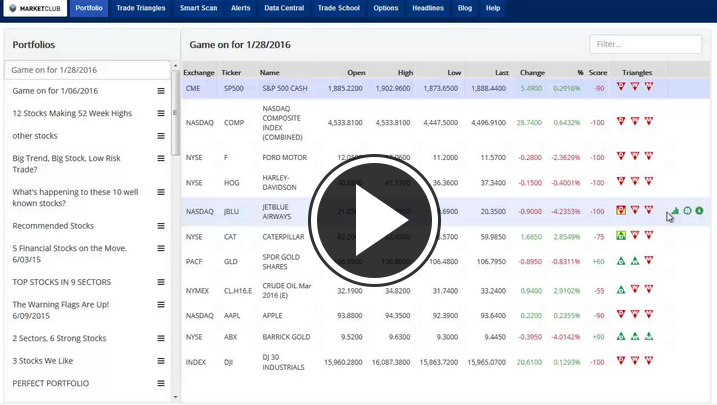 On a brighter note, my trade in Apple Inc. (NASDAQ:AAPL) turned out well and it would now look as though Apple is going to be on the defensive for several months. I can see this stock continuing to erode down to perhaps the $80 level.

Let's look at some other well-known stocks that are all in major downtrends at the moment. END_OF_DOCUMENT_TOKEN_TO_BE_REPLACED