Dear readers, thank you for sharing a moment to leave your stocks preferences below my previous post! Some of you even trusted me to analyze some high-tech stocks, I am honored, and maybe one day I will find time to do it. Silver stocks and gold stocks are in your focus as I understood. This post is dedicated to the silver stocks.

This February I analyzed the top silver stocks (by market cap) and brought you some interesting and potentially profitable disparity that I found on the chart. After the comparison chart I asked you to pick your favorite stock among the top five and below is the graph of the voting results. 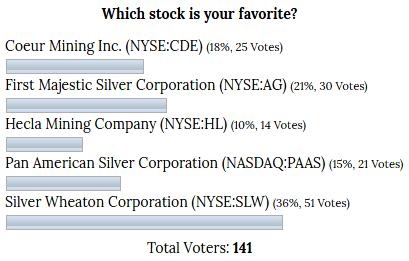 The majority of you chose Silver Wheaton Corp. (NYSE:SLW) as your favorite. First Majestic Silver Corporation (NYSE:AG) ranked second and Coeur Mining Inc. (NYSE:CDE) was the third. Let’s see how those stocks behaved after the vote in the chart below that covers the period from the vote till now. END_OF_DOCUMENT_TOKEN_TO_BE_REPLACED

People ask me why I prefer silver over gold recently. There are several factors why I like in silver, the first is the cheap price, you don’t need to use leverage to enter the market, the second is that I have a bearish view of the gold/silver ratio and the third, but not the last thing is that it is not favored by central banks or ETFs and flies die when elephants fight.

So, in this post I would like to analyze some silver stocks. As you might remember they scored record gains last year and I thought we could see more gains as precious metals crept to the upside after consolidation.

There are top 5 silver mining companies by market capitalization and silver itself (black) in the chart above. END_OF_DOCUMENT_TOKEN_TO_BE_REPLACED

Chart 1: Top Mining Stocks: The Leaders Lost The Most

The 3 top gold stocks by past performance: END_OF_DOCUMENT_TOKEN_TO_BE_REPLACED

At the start of this month, I shared with you the comparative dynamics of gold and gold stocks. I joked that the commodities traders could only envy the stock investors as the results of gold purchase were laughable compared to investing in stocks. And today I would love to show you an even more surprising results of silver stocks.

Chart 1. Top Silver Stocks Vs. Silver: This Brilliant League Is Not For Metal

Chart courtesy of tradingview.com
The above chart has a high resolution and to see it in a full size; please click on the chart. It shows us the comparative dynamics of silver and the top silver stocks by market cap.

The 5 stocks are sorted by market cap: END_OF_DOCUMENT_TOKEN_TO_BE_REPLACED

Even as investors were re-embracing stocks in 2010 and 2011, they scored really big gains with one of the hottest commodities in the world: Silver.

The precious metal soared in price from under $20 in August 2010 to nearly $50 an ounce by the next spring. In the hindsight, the silver spike was a classic bubble, fueled by inflation concerns that simply never materialized.

Though few people could have guessed that silver would be capable of a 150% nine-month gain, few also would have predicted that the eventual slump in silver would be so extended. Silver prices fell back below $30 an ounce by the start of 2013, and they've been in freefall ever since. A snapback to 2011 peaks is out of the cards.

You can get a sense of just how painful the silver slump has been by glancing at the performance of key exchange-traded funds (ETFs). The leveraged (2-times and 3-times) funds have been among the market's worst performers.

And when it comes to the silver producers themselves, it appears as if sentiment has utterly collapsed. In recent weeks, industry share prices have slumped another 20%-to-30%. In contrast, the pullback in gold prices and shares of gold miners has not been nearly as severe. END_OF_DOCUMENT_TOKEN_TO_BE_REPLACED