There are times when our research team interprets our advanced predictive modeling systems so well that we call a move in the markets 3 to 10+ months in advance of the move actually happening. It has happened for our team of research so often lately that we are somewhat used to the accolades we receive from our followers and members. Our October 2018 Gold price predictions are still playing out accurately and continue to amaze people – even though we made these predictions over 12 months ago.

Today, we wanted to highlight our Adaptive Dynamic Learning (ADL) predictive modeling systems expectations for Crude Oil. The research post we made on July 10, 2019 (see below). At that time, we warned that crude oil was about to head much lower and that our ADL modeling system was suggesting that oil prices would rotate between $47 and $64 before breaking much lower in November 2019. Ultimately, oil prices will fall below $40 ppb following our timeline and could begin a broader downside move before the end of October 2019. Read our full prediction/research report from the link below. 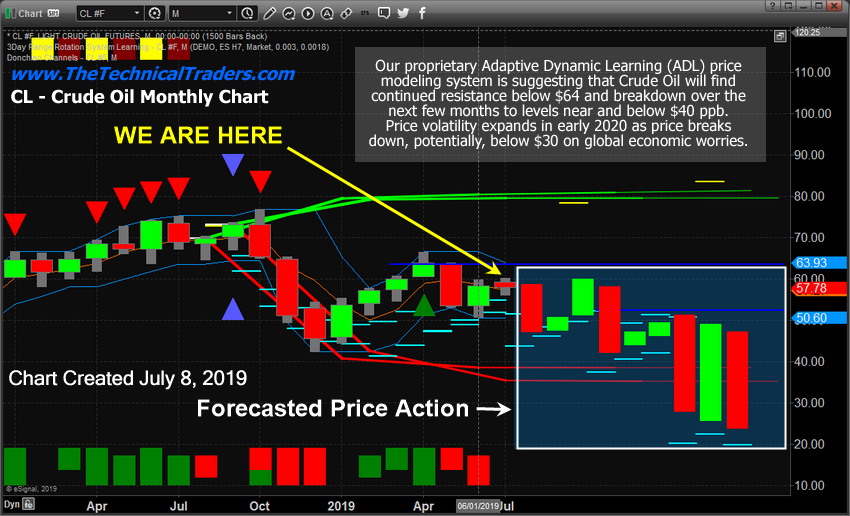 We believe the support level near $50.50 will act as a temporary support level over the next 3 to 10+ days before a moderate price breakdown below this level begins. Our expectations for November 2019 are that oil prices may fall to levels below $45 ppb on a deeper downward price move, yet will recover to levels near $47 near December 2019/January 2020. END_OF_DOCUMENT_TOKEN_TO_BE_REPLACED

A lot of investors seem very interested in bottom-fishing in the oil and energy realm these days. Perhaps that fact by itself ought to give everyone a little pause. It certainly does me!

The attraction, of course, is that oil's big crash from its June 2014 peak has made for a lot of "lower prices." Obviously, we all like to "buy low," when possible. Plus, almost everyone agrees oil isn't going away anytime soon. I don't dispute any of that.

On the contrary, as I've cited before (see my January 22nd blog, for example), the oil industry must find a bunch of new oil each year – about 5% of its current productive reserves – just to keep up with demand. About 4% of the 5% increase is required merely to replace depletion. The other 1% is to meet demand growth. Another way of stating the same thing is that by 2020, the industry will need to find about 30 million bbl/day of new oil supplies (compared to today's production of about 93 million barrels per day).